Recommended for you near Malaga Airport AGP 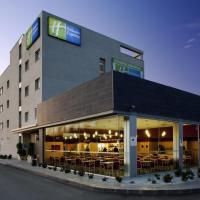 Holiday Inn Express Málaga is the closest hotel to Málaga International Airport. It offers free parking and modern rooms with satellite TV and free tea and coffee facilities. We stayed the night before our flight back to the US. I had rented a car and was able to drop my family and luggage off at the hotel, drive to Helle Hollis, drop off the car, and walk back (it was a 5 minute walk). The hotel has an expansive breakfast, abundant vending machines and other food options. Our room had a coffee machine, a nice bathroom and was clean and modern. Very easy access/close to the airport! 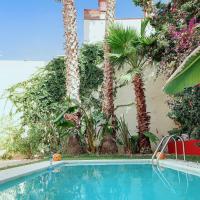 Offering garden views, Vega House - Moroccan Style for 12 + Pool&Patio is a property located in Málaga, 4.1 miles from Automobile and Fashion Museum and 5 miles from Port of Malaga. 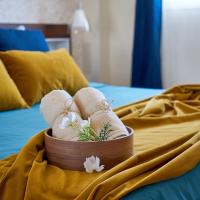 La Macarena Airport features air-conditioned guest accommodations in Málaga, 1.8 miles from Campo de Golf Beach, 1.8 miles from Los Alamos Beach and 7 miles from Automobile and Fashion Museum. The appartement felt secure and clean. The care in the décor was great. Communication from the owner was excellent. The little welcoming snacks were cute. We loved the bamboo toothbrushes ! The calm streets were welcome.... 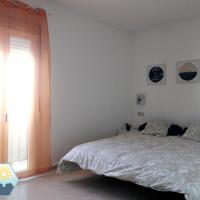 Located in Málaga, 8 miles from Automobile and Fashion Museum, Sunny Churriana-Airport provides a living room with a flat-screen TV. With mountain views, this property has a balcony. Very friendly locals neighbourhood; Good location, value for money had everything we needed. Always immediate respons from host when needed. 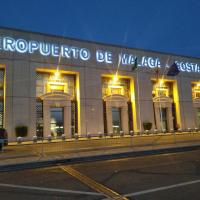 Private and spacious House provides accommodations with a kitchen, located in Churriana. Complimentary WiFi is provided throughout the property. Guadalupe is very nice and she helped us with our rides to the aeroport. The hostel is very clean and the room is nice. A beautiful place, I really recommend it. 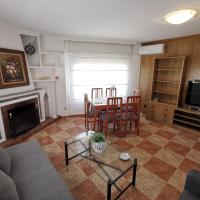 In the Churriana district of Málaga, close to Campo de Golf Beach, Casa Juan has barbecue facilities and a washing machine. Guests benefit from a patio and a terrace. The property is in a good neighbourhood, good size to accomodate 7 adults , good facilities In the house ie barbeque , garden and air con close to the local ahops and supermarket, its also a quite and not crowded as most tourist areas 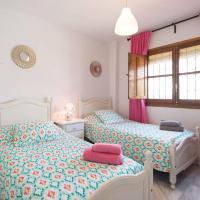 Located in Málaga, 7 miles from Automobile and Fashion Museum and 8 miles from Port of Malaga, Casa Heliomar provides accommodations with free WiFi, air conditioning, a garden and a terrace. The house was immaculate, very clean and very well-stocked. Having heaters in every bedroom was great and the electricity didn't blow out when we used them like most of the other villas that we rented. The owner provided water, coffee and fresh fruit. There were a couple of decent restaurants within walking distance. 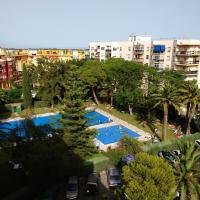 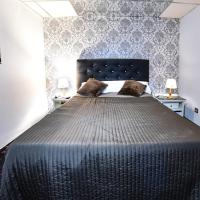 Located within 4 miles of Automobile and Fashion Museum and 5 miles of Port of Malaga in Málaga, APARTAHOTEL ELEGANCE MALAGA - DOUBLE/SUITE BEDROOM has accommodations with free WiFi. I have only good things to say about Apartahotel Elegance. The hotel is run by kind and helpful people who did everything to make our stay with our dogs a pleasant experience. I warmly recommend everybody to stay there. Top grade, 10 points for everything. Thank you. 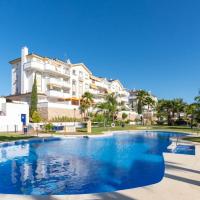 Located in Málaga, within 1.8 miles of Los Alamos Beach and 1.8 miles of Campo de Golf Beach, Lujo al lado del aeropuerto y playa. The apartment is absolutely lovely - just like on all the pictures. Whatever you might need during your stay is there - incl. a welcome bottle of vino :-). I wish we'd have had more than 2 days. It's perfectly set up for a longer stay. There is a small drive into the city centre, but it's easy to find. The private parking was very handy. The host was very friendly and helpful and has lots of insider tips for eating out or shopping. I'd definitely recommend this property and will have it in mind for our next stay. 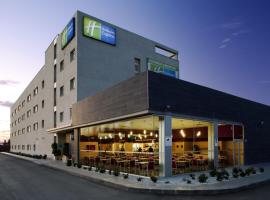 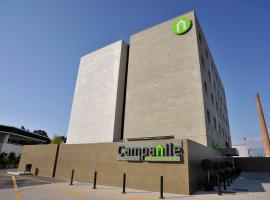 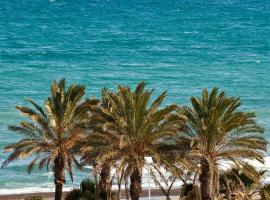 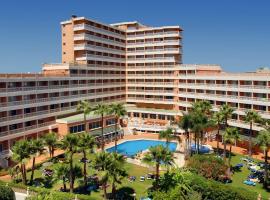 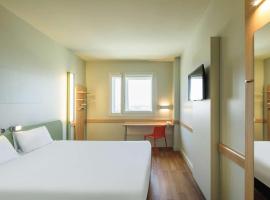 Ibis Budget Málaga Aeropuerto Avenida de Velazquez is located 3.1 mi from Málaga’s center, on the A-7 motorway. Very close to the airport, so it’s very convenient for a stopover, o short visit.

Located 3.1 mi from Málaga - Costa del Sol Airport, this modern hotel offers an outdoor swimming pool surrounded by a sun terrace and loungers. Free Wi-Fi access is available throughout. Great location for the airport. Was quick and easy to get into the old town and very close to... 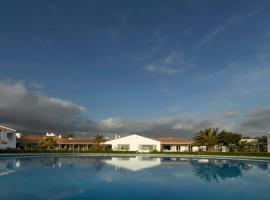 This luxury hotel blends great golfing with an authentic Andalusian feel and fantastic sea views. Come and enjoy a round beneath the warm, Mediterranean sunshine of the Costa del Sol. I like everything about this hotel . 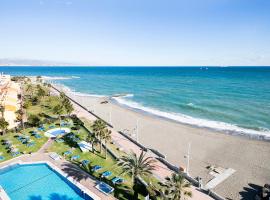 Surrounded by attractive gardens, the Sol Guadalmar features 2 outdoor swimming pools for adults and children. Fantastic hotel at a great-value location, close to the airport, with top-notch amenities. 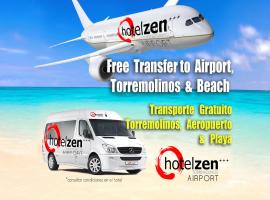 Featuring a heated outdoor pool and 2 terraces, Hotel Zen Airport is in Torremolinos. This hotel has air-conditioned rooms and free Wi-Fi. A free airport and beach shuttle service is available. All of it really nice place. Also very polite and helpful staff.

Featuring a unique medieval design, Hotel Plaza del Castillo has a distinctive façade resembling a castle and beautiful ornate gardens. Its rooms have air conditioning, heating and a mini-bar. The quirkyness of the Castle decor 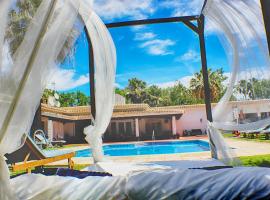 The Málaga Picasso Hotel is set near Guadalmar Beach and just 1.5 miles from Málaga Airport. An outdoor swimming pool and a hot tub are set within attractive gardens. Free Wi-Fi is provided. It’s close to the airport, to the beach anf to a very nice un expensive Italian restaurant.

Smy Hotel Costa del Sol has a restaurant, outdoor swimming pool, a bar and garden in Torremolinos. Everything..they even made us breakfast before we left at 4 a.m. at request 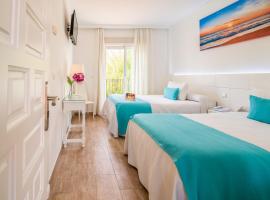 Romerito is in Malaga's Los Prados neighborhood, set on the same street as Malaga's Convention Center, Trade Fair and Auditorium, 2625 feet away. We needed to get to the airport at 4:15 with three kids. The hotel was great and kid-friendly. 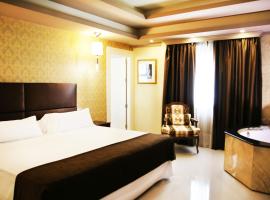 The 50s-themed Hotel Años 50 is 0.7 mi from Playamar Beach in Torremolinos, on the Costa del Sol. It features air-conditioned rooms with free Wi-Fi. It was perfect. The best place to celebrate and rest. 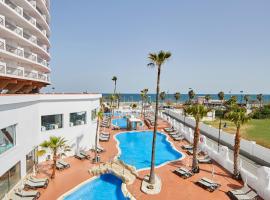 Featuring a fitness center and a bar, Riu Costa del Sol - All Inclusive is located in Torremolinos, a 20-minute walk from Calle San Miguel and 1.4 miles from Aqualand Torremolinos. The three pools and multiple restaurants allowed guests to be nicely spaced out and more...

This hotel offers rooms with a balcony and views of the mountains or sea. It features tennis courts and outdoor pools. Staffs were so friendly and accomodating. The room was spotless clean. 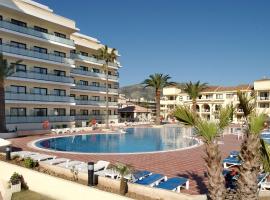 Located on Los Alamos Beach in Torremolinos, this hotel has 2 outdoor pools set in tropical gardens. It offers bright-colored rooms with private balconies, some with stunning sea views. Good location close to airport and the main strip in Torremolinos beaches

Located 3 miles (5 kilometres) southwest of Málaga city centre, Málaga Airport connects to over 60 countries worldwide and welcomes roughly 16 million passengers every year. To get there, travellers have a choice of transport options. There’s the Fuengirola-Málaga Cercanías railway service, located opposite the airport, departing around every 20 minutes. Or there’s the Málaga airport bus service, Línea Express, which circulates between Málaga city centre and the airport. You can also take a taxi from Málaga airport to Málaga for a minimum fare of EUR 15.

There are several hotels near Málaga airport, all offering a shuttler service, and there’s plenty to do inside before takeoff. The Exhibition Hall houses temporary exhibits by local artists, while the airport museum lets travellers visit the airport’s original (and now disused) control tower. Other available services include baggage wrapping, currency exchange and free WiFi. There’s also a large retail and dining area.

Málaga Airport has three terminals all joined together under the same roof, so there is no need for a shuttle bus.