A guide to Wales’ 3 national parks

Hike up Mount Snowdon, the very mountain that Edmund Hillary used for training to climb Everest, or enjoy a leisurely beach day in Pembrokeshire.

Use our guide to help you explore these three national parks that cover 20% of Wales, comprising broad, golden beaches and misty, forested mountains. 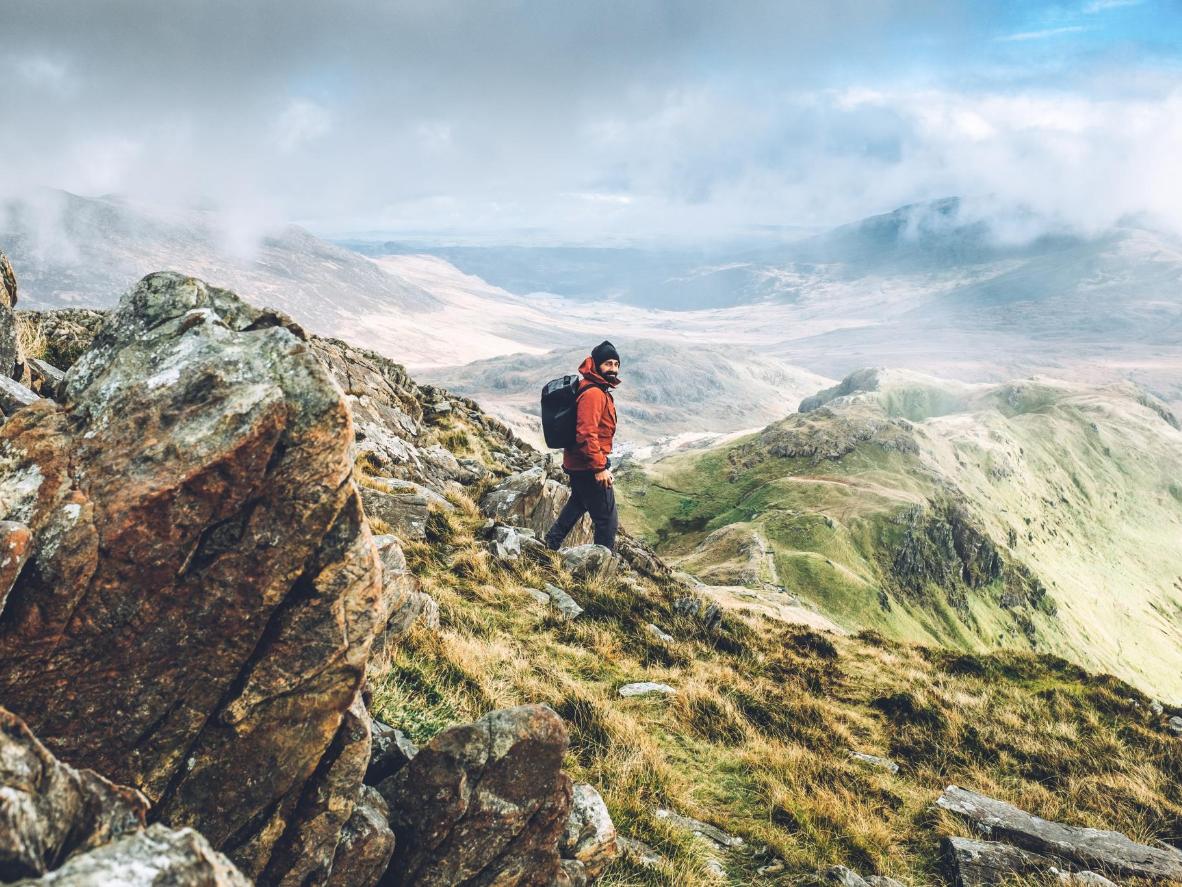 Follow the Llanberis Path up to the summit of Snowdon, passing glacial corries and knife-edged ridges

Snowdonia was the third national park to be established in Britain – after the Peak District and the Lake District – and its outstanding scenery and ample hiking opportunities mean it’s still one of the most popular. Encompassing 827 square miles of mountains, mirror-like lakes and moody moors, the park is most well known for Mount Snowdon, standing 3,560-feet tall amid the wilderness. This is the highest peak in Wales the third highest in the UK, and the very mountain that Edmund Hillary used for training to climb Everest. There are six main routes to the summit, of which the Llanberis Path (usually taking six hours to the top) is the most well-trodden (yet even so, it can often feel like you’re the only people on the trail), taking in glacial corries and knife-edged ridges as you rise up into the mist. If you’re looking for a gentler route, the first part of the miner’s path is much milder while also guaranteeing great views. And if Mount Snowdon is too much of a challenge in itself, there are numerous smaller peaks and hills such as Cwm Idwal or Tryfan in the Ogwen Valley, the latter taking as little as two hours to reach the summit, spotting historic castles and villages along the way. Stay in an old stone cottage within the national park at the highly rated one-bedroom B&B, Garth Engan. 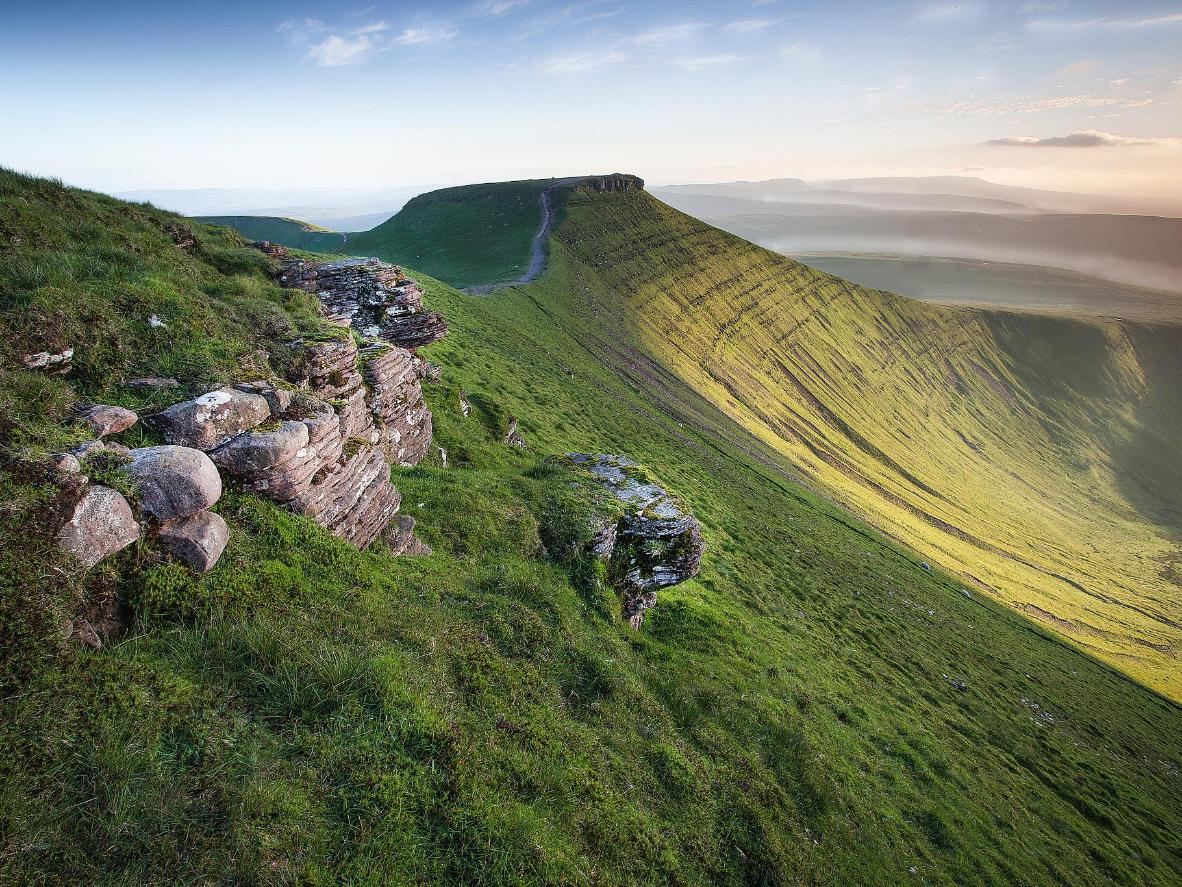 Hike the slopes of Pen y Fan, the highest peak in south Wales

Yet another hikers’ paradise, the Brecon Beacons is a land of red sandstone mountains, glacially-carved rock formations, castles and waterfalls hidden in ancient woodland. It’s also home to Wales’ first international dark-sky reserve (from which it’s said you can spot the Milky Way, nebulas and sometimes meteor showers) making camping here a surreal stargazing opportunity. Most keen walkers make straight for Pen y Fan or Corn Du, the two highest peaks in south Wales, rising to 886 and and 873 metres above sea level respectively, yet still both relatively manageable. The most popular route is a circular trail of the central Beacons or – for more experienced hikers – the 4- to 5-hour ‘Gap’ trail, which starts at the Neuadd reservoirs (leave your car in the Taf Fechan Forest car park). Another must-see is the caves at Dan-yr-Ogof, comprising Cathedral Cave, Show Cave and Bone Cave, a network of 10 miles of eerily-lit subterranean chambers, where skeletons have been discovered that date back to the Bronze Age. Enjoy proximity to Pen y Fan and mountain views from the inviting Herdmans B&B. 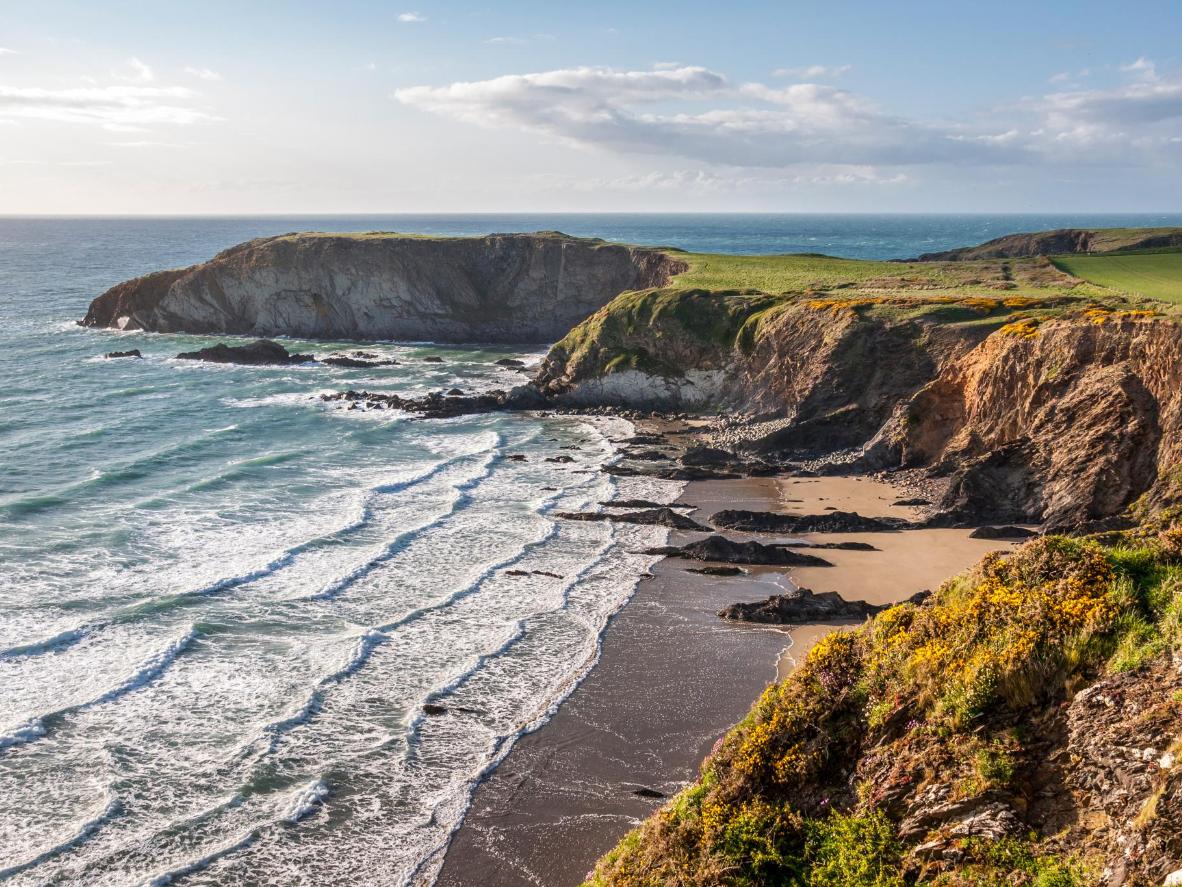 This was the first British national park to consist entirely of coastal landscapes, and the best bit by far has to be the Pembrokeshire Coast Path. This 186-mile-long route runs from St Dogmaels in the north to Amroth in the south, passing lagoons, lighthouses, remote headlands and rock formations like St Davids. Or the limestone Green Bridge of Wales, with flocks of seabirds nesting on its grass-covered arch. There are also over 50 beaches here that could easily be in the Caribbean – bar the temperature difference; Barafundle Bay and Whitesands in particular. If you’re aching for even more natural beauty, venture to one of the islands that cluster around the coast; the wind-buffeted Skomer island is home to the largest puffin colony in southern Britain, alongside kites and falcons, while dolphins and seals play close to the shore in the main bay. There’s a year-round coastal bus service available, designed for walkers, so you can pick up the trail wherever you prefer rather than walk the entire length. Check into St David's Guesthouse, a regal country house close to the Pembrokeshire Coast Path.

In the UK, be captivated by wild swimming

Make the most of the UK's rugged landscape and bucolic hideaways with a swim in the wild.
Feb 1, 2020
#united-kingdom
#england
#scotland
#wales
#isle-of-skye
Nature

The 5 most beautiful beaches to watch the sun go down, according to global travellers.
Sept 24, 2019
#sunsets
#nature
#scenery
#beaches
#australia

The USA's most romantic destinations

Around the world in 7 plates of calamari