Scotland’s beauty knows no bounds but not many people know the beauty of Scotland’s islands.

Here is your definitive guide. 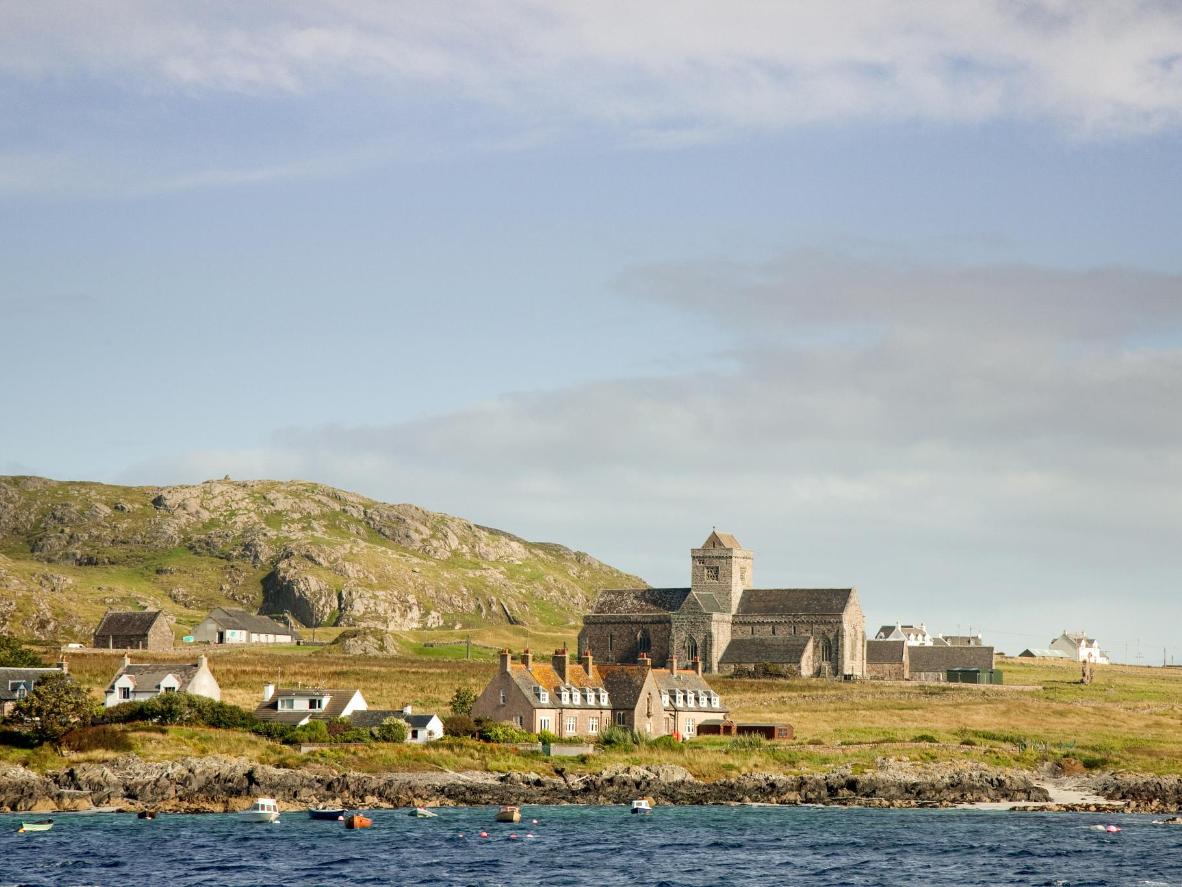 Iona Abbey, one of the oldest and most important religious centres in Western Europe

The island of Iona possesses a powerful spirituality, with pilgrims coming from all over the world for contemplative walks on its heather moors, sandy beaches and rocky coastline pummelled by wild Atlantic waves. It first gained religious significance with the arrival of St Columba in 563 AD – an Irish monk who brought Christianity to Scotland – but even before that, it was home to Druid priests. The island’s sacred, beautifully restored Abbey is a must-see; it was built in the early 1200s on the site of St Columba’s original, wattle and timber monastery and is one of the oldest and most important religious centres in Western Europe. Stay conveniently close by at the highly rated Ardoran House B&B. 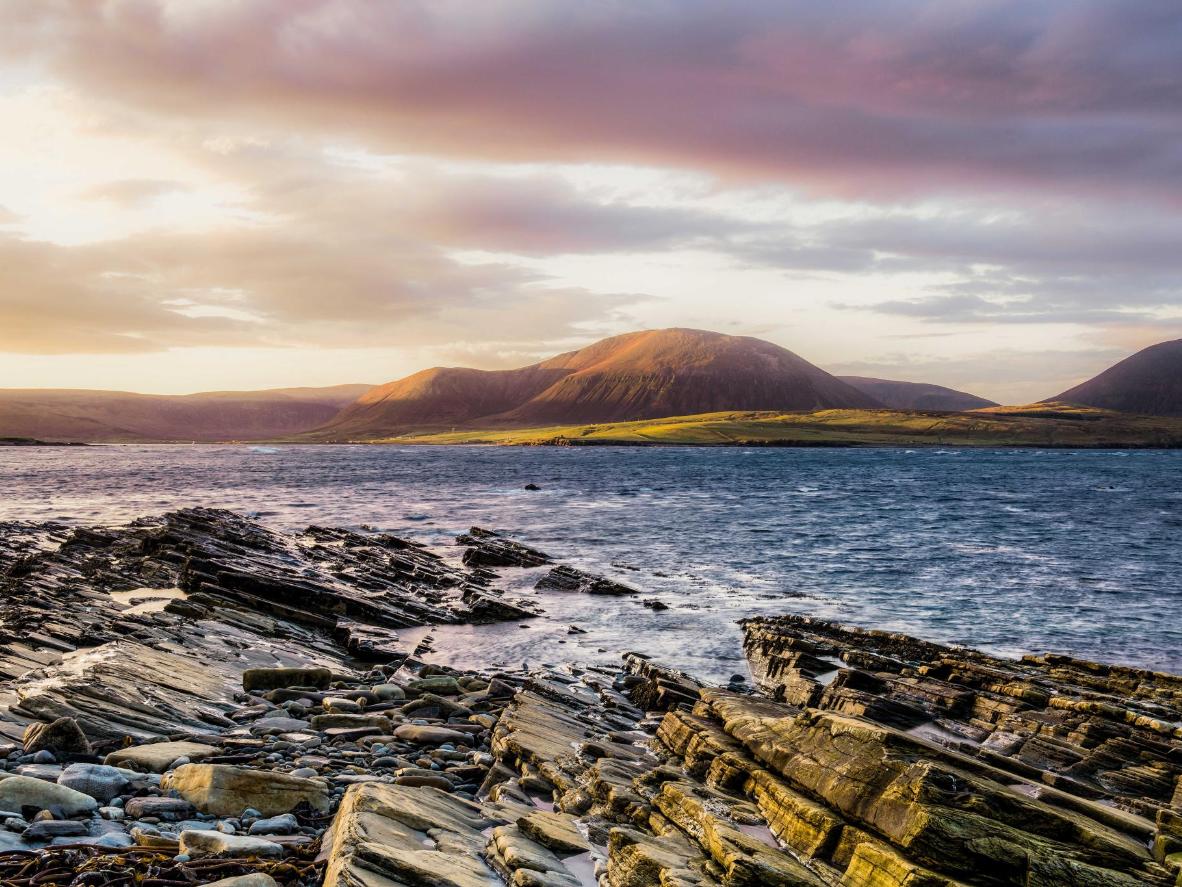 Most visitors head to the Orkney Islands for the 1,000-plus prehistoric sites that have been discovered here. Namely the Heart of Neolithic Orkney, which is a collection of ancient stone circles and a well-preserved Neolithic village. For those more interested in modern history, the Orkney’s natural harbour of Scapa Flow was the base for the British Grand Fleet in World War One. On 21st June 1919, under the misapprehension that peace talks had failed, the leading Admiral gave the command to scuttle (intentionally sink) the entire fleet, resulting in the greatest loss of shipping ever recorded in a single day with 52 ships plummeting to the seafloor. While many were later salvaged, several historic shipwrecks remained underwater and can now be explored via kayak or by scuba diving with local expeditions. Stay at a traditional Orkney farm at Burnside B&B. 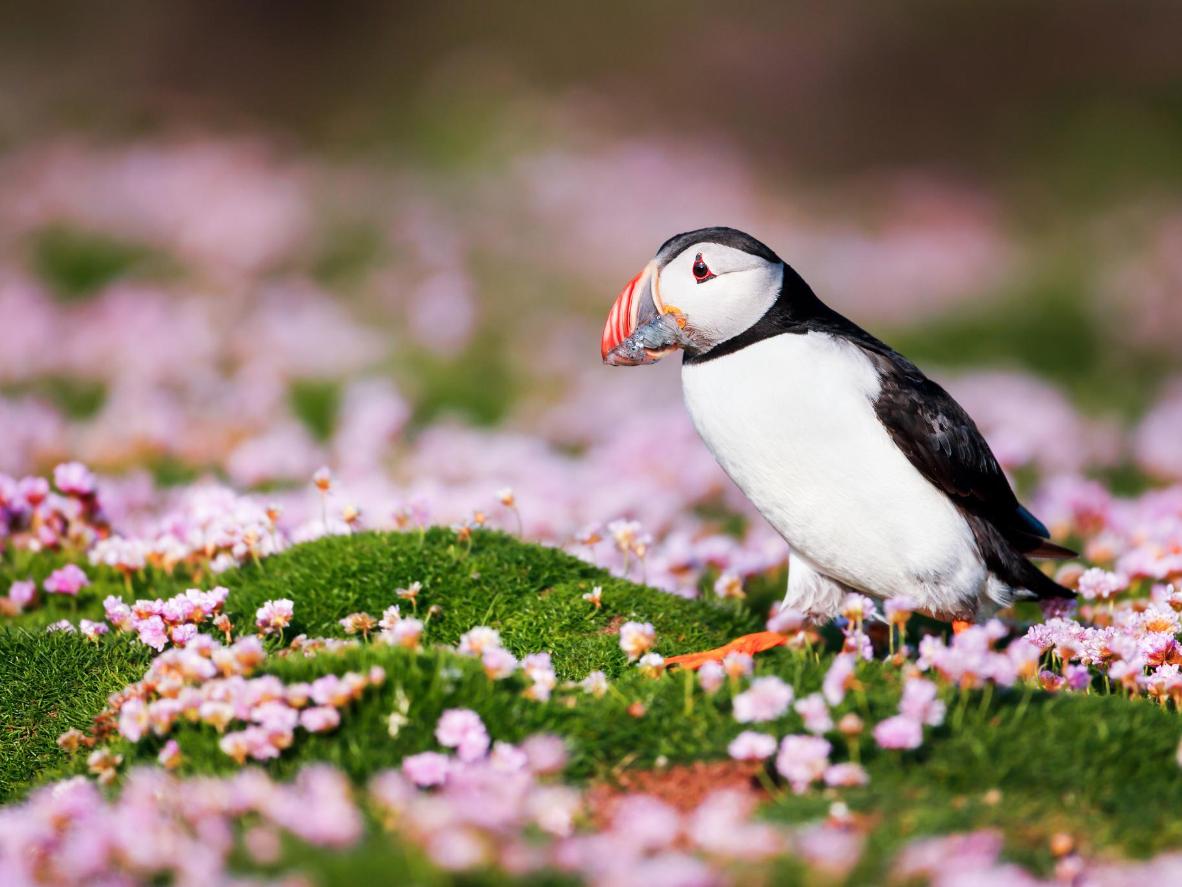 Officially the most remote inhabited island in the UK, this hilly and barren island lies halfway between the Shetland and Orkney archipelagos. It’s home to a remarkable range of wildlife (in particular rare birds), historic lighthouses, and shipwrecks, as well as the distinctive Fair Isle knitwear. Visit the Bird Observatory and learn about the island’s resident puffin colony, as well as 300-plus other bird species that nest in the steep coastal cliffs. Check into Da Roost holiday home, located in Sumburgh, from where you can fly or take a 3-hour ferry to Fair Isle. 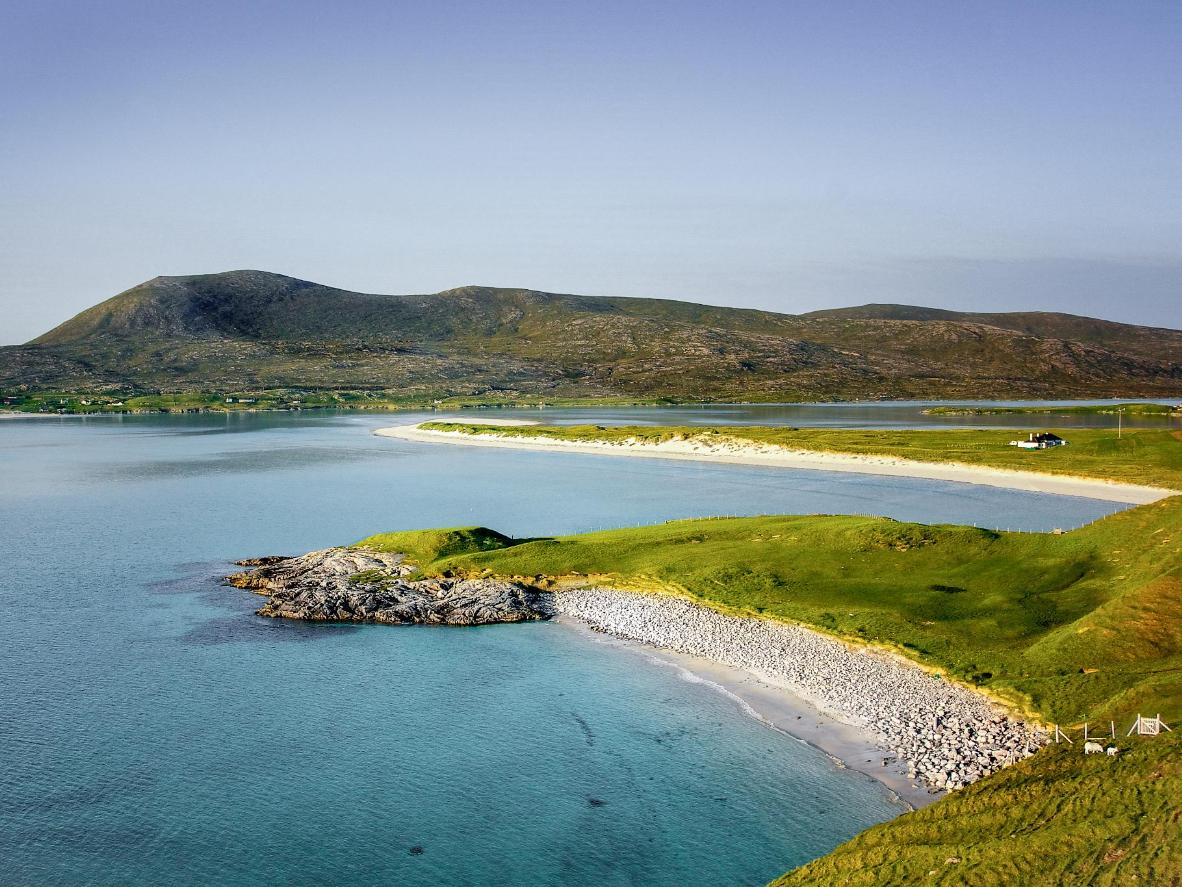 The Caribbean-esque beaches of the Isle of Lewis

Lewis and Harris technically form one landmass but are split into two islands, found at the top of the Outer Hebrides. The white sandy beaches here are quite something, bearing an uncanny resemblance to the Caribbean (though the water’s not so balmy). Another draw is the chance to visit a Neolithic stone circle at Callanish on the west coast of Lewis; these several-thousand-year-old boulders were built around the same time as Stonehenge but are not nearly as well known, meaning you can walk between the stones and even touch them, without the presence of large groups of tourists. The sunsets over the sea are divine from Broad Bay House, a luxury guest house facing the beach on the Isle of Lewis. 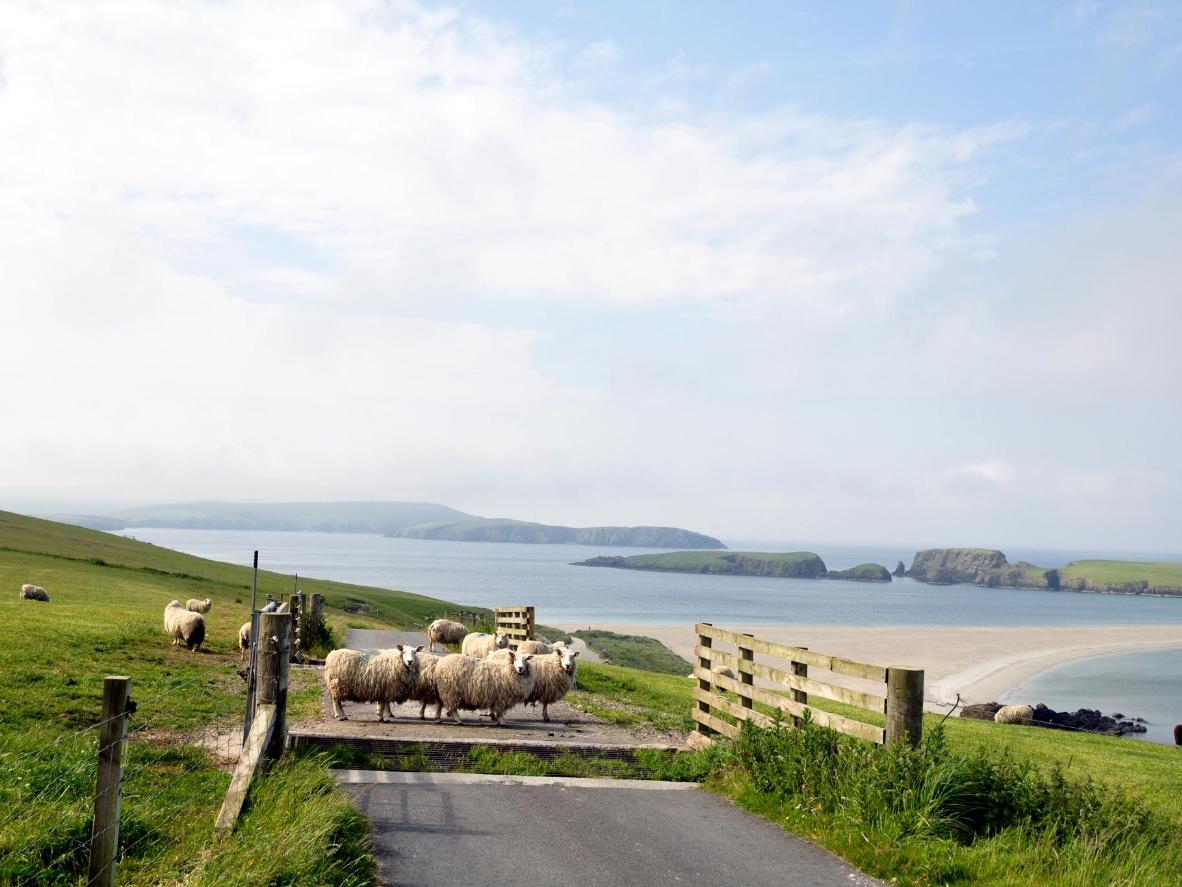 The islands that make up the Shetland archipelago are technically part of Scotland but have a strong Scandinavian heritage. They were under Norse rule for 600 years after a Viking invasion in the 8th century and you can still hear this influence in the local dialect, see it in the wooden architecture and feel it in the culture. The Shetlands are also filled with geological and natural wonders, from glaciers and sea lochs to rippling rock formations forged over aeons. It’s a place to immerse yourself in the outdoors, where you'll find hundreds of trails covering wild landscape grazed by tiny Shetland ponies. Hike the moss-clad moors, birdwatch atop sea cliffs and visit the islands’ pristine beaches. The warm and welcoming Aald Harbour B&B on Mainland (the main island) is a great retreat after a day spent hiking. 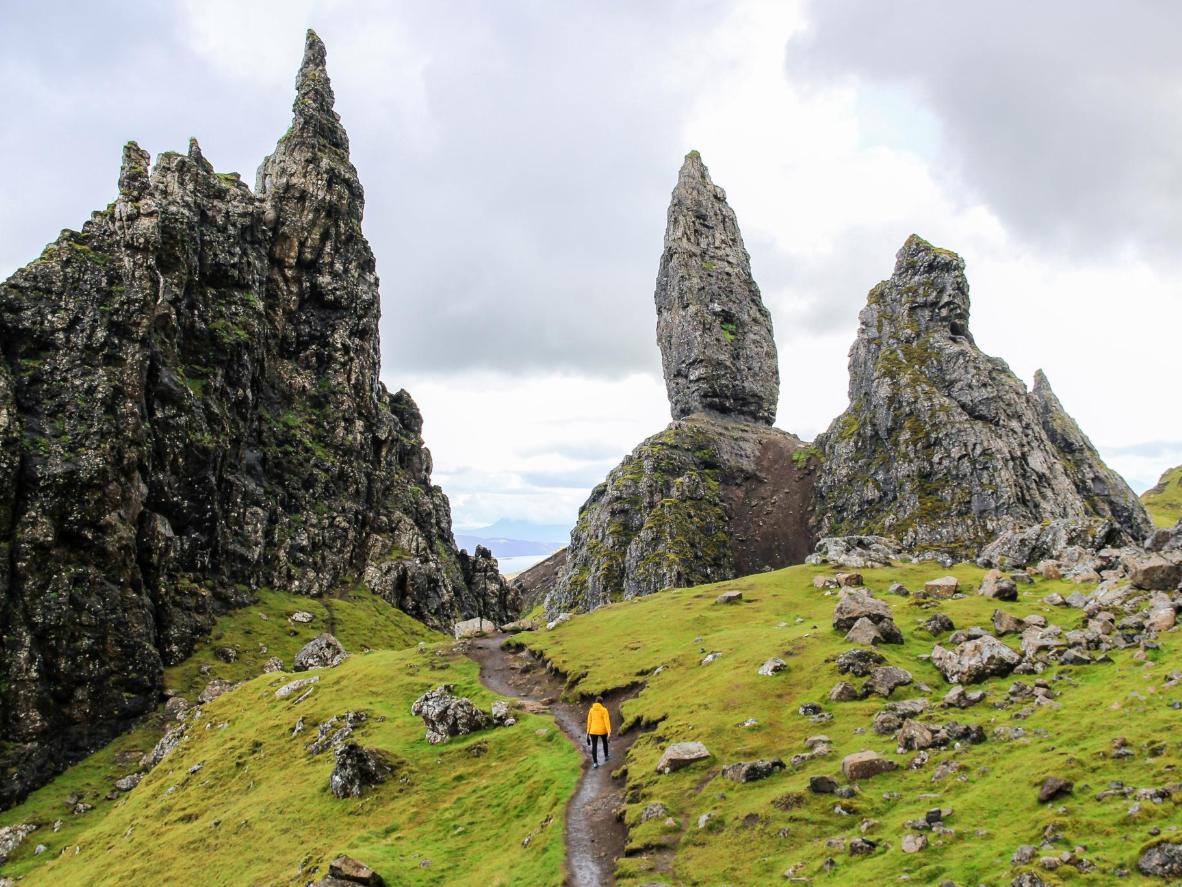 The rocky pinnacle known as The Old Man of Storr, Skye

Huge swathes of Skye's rocky, mountainous terrain are coated in green moss and purple heather, broken up by lochs that glint silver in the cloudy daylight. Not to mention ancient waterfalls, volcanic rock formations and the barren, fierce-looking Cuillin mountain range. It’s the largest island in the Inner Hebrides archipelago and is connected to the mainland by a bridge on the west coast of Scotland. Legends of giants and fairy folklore abound here, in medieval castles as well as crystalline rock pools. It’s also a great place to visit for gastronomes – try the local shellfish, Skye-smoked salmon, sweet and juicy lobster, organic lamb and the island’s own single malt Scotch whisky, Talisker. The friendly owners of Brae View B&B are more than willing to offer restaurant recommendations. 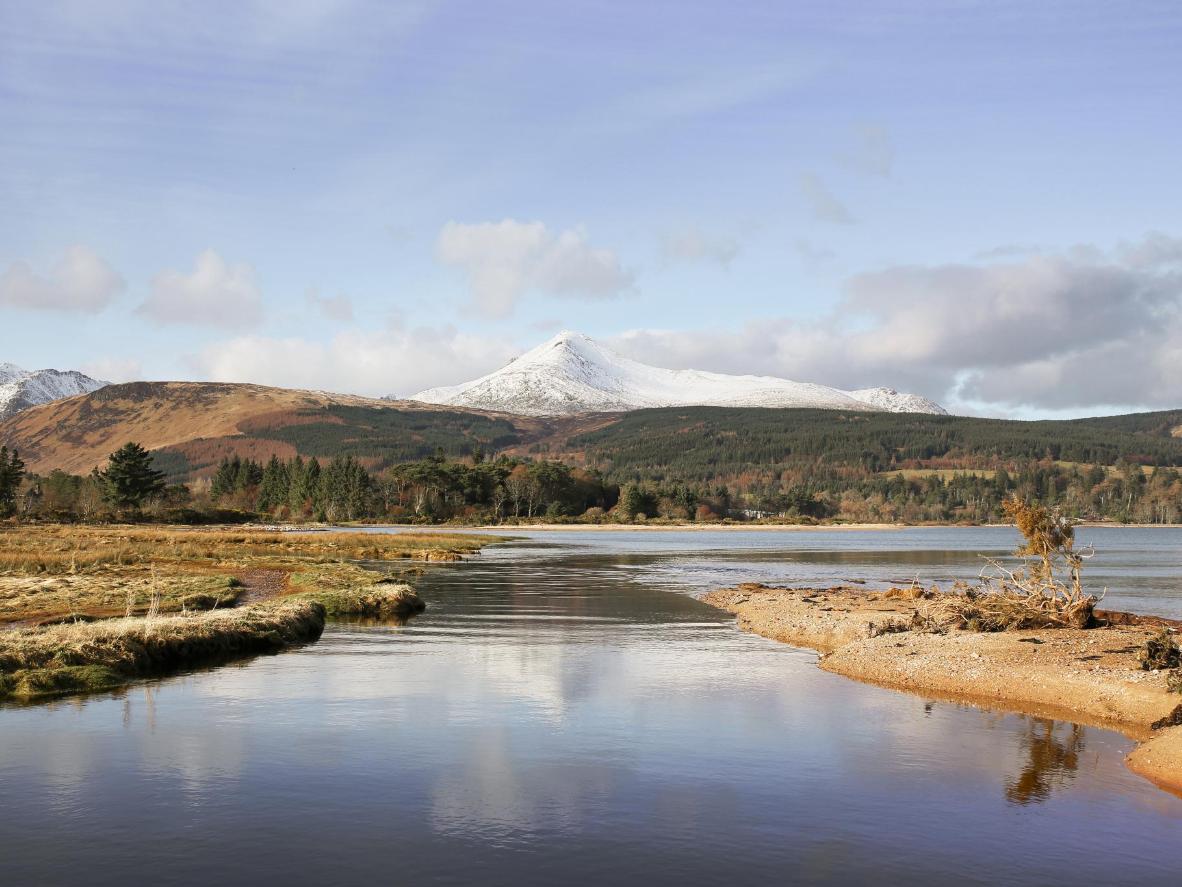 The snowcapped Goatfell mountain on the Isle of Arran

Scotland’s seventh-largest island sits off the west coast, not far from Glasgow. Commonly referred to as ‘Scotland in miniature’, Arran is a hiker’s paradise thanks to the magnificent scenery of the Highland Boundary Fault, the peak of Goat Fell standing at 874 metres, and the Arran Coastal Way running for 65 miles around the island. Fuel up for long walks with local specialities including fresh lobster, prime beef, salmon, duck and traditional dairy ice cream, best washed down with a pint of locally brewed ale. Looking out across Lamlash Bay, the boutique Glenisle Hotel is a wonderful base from which to explore Arran. 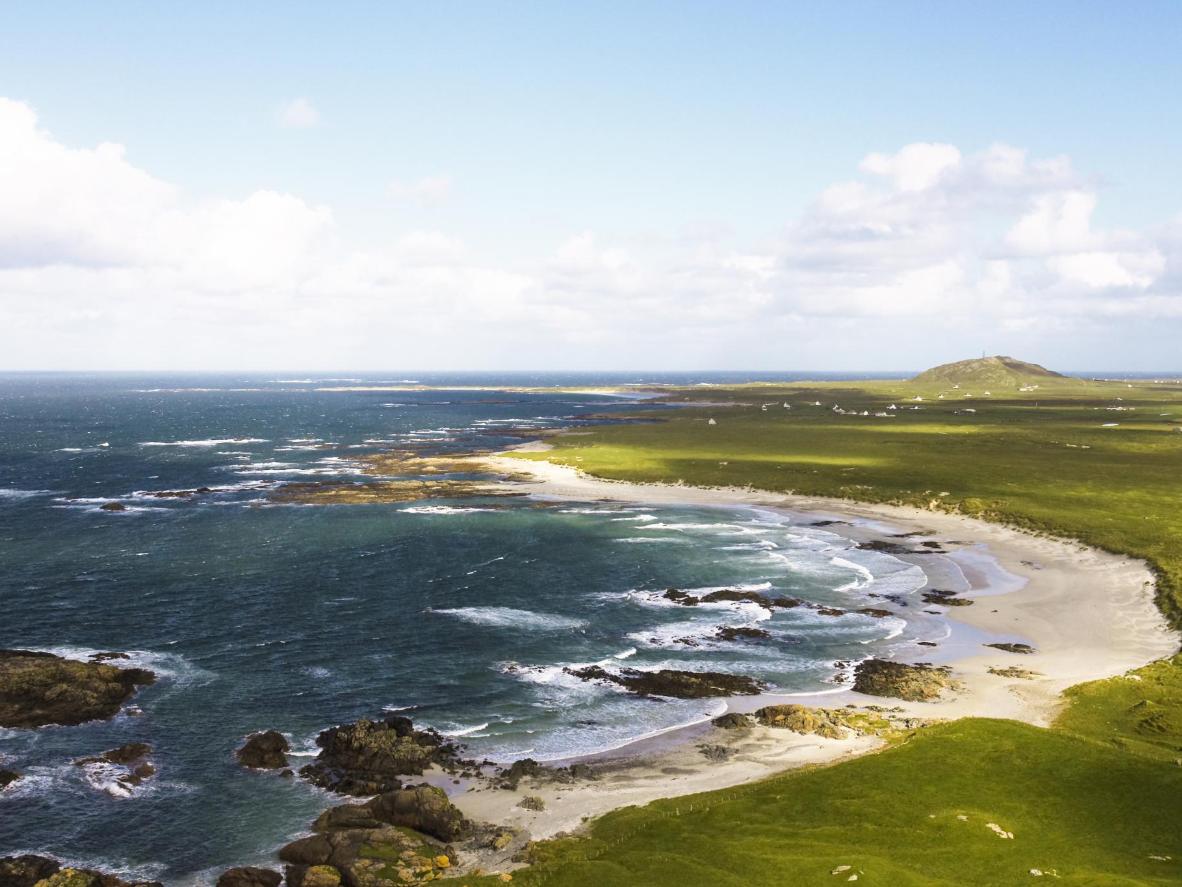 Windswept Tiree is a well-kept secret

Tiree, the most westerly of the Inner Hebrides, is a well-kept secret. While you can fly straight from Glasgow or get the ferry from Oban, it still feels relatively remote. Go for windy walks across its flat, fertile landscape, past sheep peacefully grazing on dandelions in wildflower meadows and the odd boxy, white-painted farmhouse. Or wander along white sandy beaches and clamber up the hilly dunes. But be prepared for windy and rainy weather; Tiree’s ‘Sunshine Island’ nickname is rather deceptive. With just two ferry crossings to Tiree per day, you might need to make a pitstop in Oban. If so, make it Greystones, a B&B in a baronial mansion. 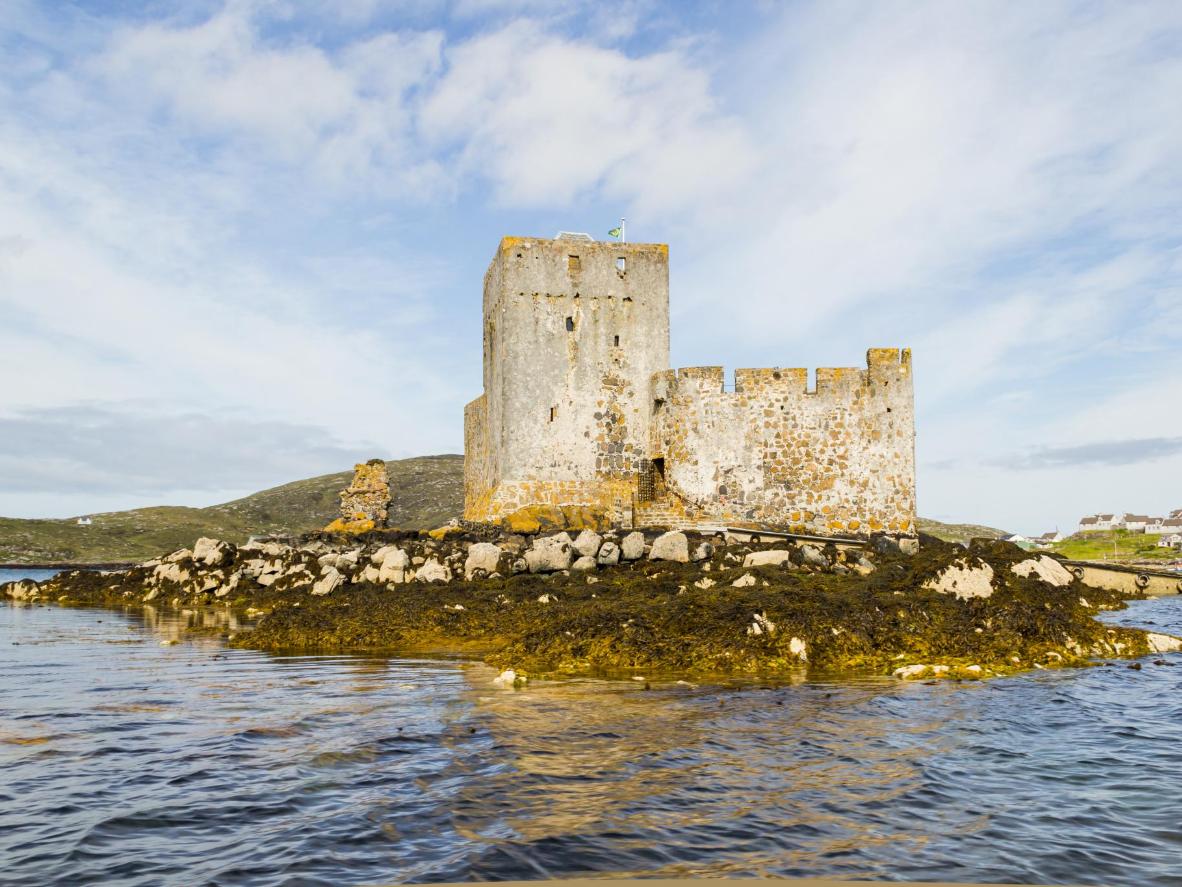 Kisimul Castle, a small medieval castle located on an islet in the centre of Barra's Castlebay

Visitors arriving on the wee island of Barra via ferry will fall in love at first sight with Kisimul Castle. This medieval fortress rises out of the sea offshore from the village of Castlebay and is only accessible by boat. In 2001, the castle was leased by the chief of Clan MacNeil to Historic Scotland for 1000 years for the annual sum of £1 and a bottle of whisky. But you can also fly here, landing in the bay of Traigh Mhòr – it's the only airport in the world that uses a beach as the runway, which makes for a pretty special experience. Though it’s only a small island, Barra’s landscape packs in a lot of diversity, from the mountains of Ben Tangaval and Heaval to the deep green glens, vivid machair flowers and turquoise waters. If you're keen to land on the sand runway, you can only fly into Barra from Glasgow, so spend the prior night at the tartan-clad Pipers' Tryst Hotel. 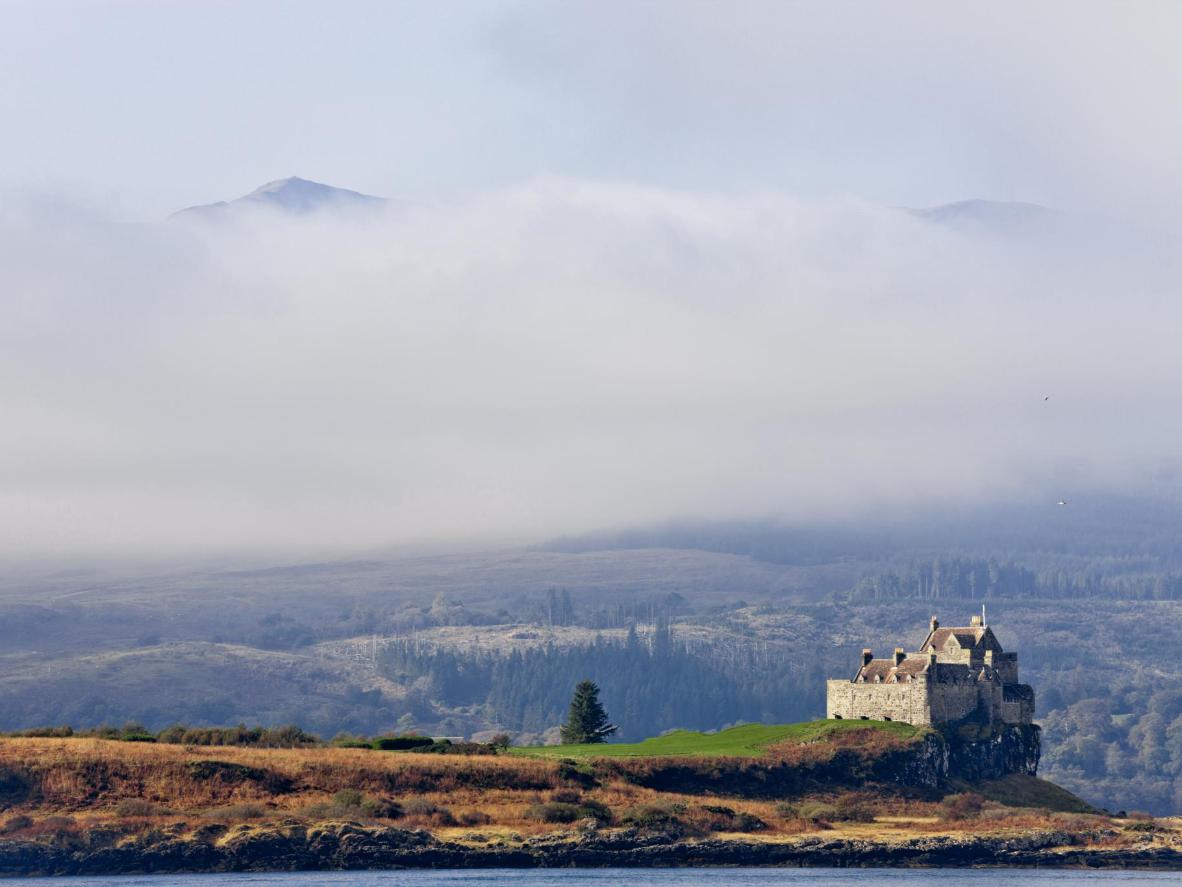 After a 45-minute ferry ride from Oban to the isle of Mull, the silhouette of Duart Castle slowly comes into view as you dock in the village of Craignure. But the island’s capital, Tobermory, is even more of a delight, with primary-coloured painted houses reflected on the harbour. Use this pretty village as a springboard to explore inland, where the landscape is rough and varied; while the east is verdant and gently hilly, the west is characterized by steep cliffs, waterfalls, sea caves (the ancient Fingal’s Cave is located on a tiny island next to Mull and is worth a visit via one of the available boat tours), and rock formations standing offshore amid the crashing waves. Stay at Glengorm Castle in Tobermory for moody Atlantic views and regal suites.

The best spots in the USA for a cinematic proposal

Romantic inspiration for those keen to pop the question but unsure how to set the scene.
Aug 23, 2018
#romance
#new-york
#orlando
#york
#hawaii
Destinations

Extraordinary relics of ancient civilizations to thrill you and fire up your imagination.
Jun 23, 2018
#archaeology
#amateur-archaeology
#san-juan-teotihuacan
#nazca
#chachapoyas
Destinations