The best time to visit Thailand is between November and April. This is when the weather is mostly cool and dry, so you’ll have plenty of opportunity to immerse yourself in the local culture. Expect temperatures of between 21°C and 33°C, with a peak of around 37°C in April.

You can relax on one of Thailand's tranquil beaches or celebrate festivals like the romantic Loy Krathong, high-energy Songkran or vibrant Chinese New Year. It’s still winter from November to February – summer gets underway in March for most of the country. Despite the beach weather, you’ll want to pack something to wear to one of the many temples – plus clothes you’ll be happy getting soaked in the nationwide water fights during Songkran (Thai New Year). Heading to the south? Keep in mind that the Gulf coast's monsoon season is from October to April, so you’re better off visiting spots like Phuket and Krabi over on the Andaman side.

It’s winter for most of Thailand in January, which means average temperatures of 23°C to 33°C. Chinese New Year commonly happens around this time, but it can also fall in February depending on the lunar calendar – expect vibrant parades as the Thai-Chinese population celebrates.

If you’re planning on heading to the beach, the Andaman Coast is a good choice. It’s the dry summer season here, and during Krabi’s Talay Waek or ‘divided sea’ phenomenon, a walk-able sand bar opens up between three islands at low tide. It’s monsoon season over in the Gulf of Thailand, especially Koh Samui, Koh Phangan and Koh Tao. For cultural experiences, head to Chiang Mai for the Bo Sang Umbrella and San Kampheng Handicrafts Festival, which includes a parade, cultural shows and a traditional market.

In February it’s summer in the central, northeastern and southern regions of Thailand, but it’s the rainy season in the Gulf of Thailand. Temperatures across the country range between 23°C and 33°C, but it’s coolest in the north, where winter lingers on – perfect weather for the Chiang Mai Flower Festival.

There are plenty of other cultural events to experience, too. Makha Bucha Day is one of the most important Buddhist holidays of the year, with temple ceremonies and rituals around Thailand commemorating the Buddha’s famous ‘Ovada Patimokkha’ teaching. Chinese New Year sometimes falls in February, depending on the lunar calendar. The King Narai Festival in central Thailand's Lopburi province honours King Narai the Great making Thailand a centre of culture, religion and diplomacy. Valentine’s Day is celebrated with a twist in the south, as just off the beautiful beaches of Trang, underwater wedding ceremonies are carried out for qualified divers.

Eventi in Thailandia a febbraio

March marks the start of summer for most of Thailand, but on the Gulf coast in the south, it’s still the rainy monsoon season – for drier weather you’ll need to head across to Phuket or Krabi on the Andaman side. Temperatures across the country are pleasant, between 25°C and 34°C, so it’s definitely beach weather.

For a cultural fix, watch the Wai Kru Muay Thai Ceremony in the central province of Ayutthaya, where Thai boxers honour their instructors. Foodies are in for a treat, as it’s the height of mango season in the south of Thailand. That’s also where Krabi’s Talay Waek or ‘divided sea’ phenomenon occurs – at low tide you can walk along a natural sand bar between Koh Kai, Koh Tup and Koh Mor islands.

Eventi in Thailandia a marzo

By April, summer is well underway in Thailand. Visiting now means you’ll be able to take part in the famous Songkran celebrations that mark the traditional new year holiday. There’s a fun vibe at the large-scale water fights that take place in cities like Bangkok, Chiang Mai and Phuket, while locals perform traditional rituals like visiting their hometowns and paying respect to their elders. Buddhists visit local temples to pray and make spiritual offerings, too.

Daytime temperatures can reach 37°C, but be prepared for some rain on the southern coast along the Gulf of Thailand. April is also a good time to see the Talay Waek or ‘divided sea’ phenomenon in Krabi province – at low tide, you can walk along a natural sand bar between Koh Kai, Koh Tup and Koh Mor islands.

Summer continues throughout May for much of Thailand, with temperatures between 24°C and 34°C. But it’s also rainy in many parts of the country – the north, northeast and central regions, and along the Andaman coast in the south – so travel options are a little more limited.

Cultural highlights this month include the ancient rituals of the Royal Ploughing Ceremony in Bangkok, which is intended to bring good fortune for the upcoming rice-planting season. Visakha Bucha Day also falls in May, when temple ceremonies commemorate three defining events in the Buddha’s life. Things go off with a bang in the northeastern Isaan region, when the Rocket Festival sees home-made projectiles fired into the sky – locals believe this will encourage rainfall and a plentiful harvest.

Eventi in Thailandia a maggio

It’s officially the rainy season in Thailand in June, making this a less popular time to travel – but that does mean there are fewer crowds to compete with. For beach options, it’s still dry on the southern Gulf coast, including islands like Koh Samui, Koh Tao and Koh Phangan, where temperatures are between 24°C and 33°C. Just keep in mind that the Andaman Coast and the north, northeast and central regions are wet around this time of the year.

In the northeastern province of Loei, Phi Ta Khon – or the Ghost Festival – is a unique sight: locals dress as spirits and make religious merit in an attempt to rid the town of bad omens. If you’re a foodie, it’s the eastern province of Chanthaburi you want to head to. Countless tropical fruits are in season, including notoriously pungent durian, and there’s no better place to try them than at the Chanthaburi Fruit Festival.

Eventi in Thailandia a giugno

In July, the monsoon continues in the north, northeast and central regions of Thailand, as well as on the Andaman Coast in the south. Temperatures remain a comfortable 24°C to 33°C, but for dry, sunny beach weather, the southern Gulf islands of Koh Samui, Koh Tao and Koh Phangan are where you want to be.

King Vajiralongkorn’s birthday is celebrated nationwide towards the end of the month – look out for ornate street decorations in Bangkok's old town. July also sees the Asanha Bucha religious holiday, when temple ceremonies mark the anniversary of the Buddha’s first sermon. The day after is the start of the three-month Buddhist Lent season, when monks traditionally stay within their temple and many Thai Buddhists choose to abstain from alcohol. If you’re in the northeast, look out for the Ubon Ratchathani Candle Festival, when awe-inspiring giant candles are paraded through the city’s streets.

Eventi in Thailandia a luglio

Beach options in Thailand remain limited in August: the rainy season still isn’t letting up, and just about the only places for reliable dry weather are southern Gulf coast islands like Koh Samui, Koh Tao and Koh Phangan. Like the previous months, it’s still warm – between 24°C and 33°C on most days – but heavy rain is a common occurrence in the north, northeast and central regions and on the Andaman Coast down south.

The middle of August marks the birthday of Queen Dowager Sirikit, the wife of the late King Bhumibol, so you’re likely to see her portrait displayed even more prominently around the country at this time. Street decorations and ceremonies to pay respects are also likely in Bangkok's old town.

Temperatures drop ever so slightly in September, to between 24°C and 32°C, as Thailand's rainy monsoon season slowly begins to come to an end. There are still frequent downpours in the north, northeast and central regions, as well as on the Andaman Coast in the south.

If it’s sunbathing under a clear blue sky you’re looking for, Gulf coast islands like Koh Samui and Koh Tao remain your best bet at this time of year. The gradual change in weather does make it a good time to visit the northern and central regions for a glimpse of the photogenic sea of mist from the top of some of Thailand's most scenic peaks. Doi Inthanon in Chiang Mai and Khao Krajom in Ratchaburi are both good options.

Eventi in Thailandia a settembre

It’s the last month of Thailand's long-running rainy season, but also one of the hardest months to find somewhere with reliably sunny weather. Temperatures range from 23°C to 31°C, but it’s rainy in the north, northeast and central regions, and also on southern Thailand's Gulf coast, including islands like Koh Samui, Koh Tao and Koh Phangan.

The drier, sunnier weather gets underway in Andaman coastal destinations such as Krabi and Phuket, but it’s still a bit hit and miss this month. The annual Vegetarian Festival is another reason to visit Phuket, though – it’s at its most colourful here, with a parade of spiritual sacrifices. The festival is also big in Bangkok: look out for yellow flags on street stalls selling vegan food. It’s still a good time to see the sea of mist in the northern and central regions, too.

Eventi in Thailandia a ottobre

Anniversary of the Death of King Bhumibol

Winter is underway at last come November, with temperatures dropping to between 22°C and 30°C around the country. The weather is generally dry and the skies clear in the north, northeast and central regions, as well as on the south's Andaman Coast. But that means it’s time for the Gulf coast to have its rainy stint, so islands like Koh Samui and Koh Tao aren’t great for sunbathing right now.

Loy Krathong is November's cultural highlight: perhaps Thailand's most picturesque festival of all, it involves locals paying respect to the goddess of the waters by floating intricately decorated floral rafts on canals and rivers. It coincides with the Yi Peng festival in Chiang Mai, when thousands of paper lanterns are released in an incredible nighttime display. And in Lopburi, a special, large-scale feast is laid on for the city’s enormous monkey population to give thanks for the apes’ contribution to the tourism industry.

December is the coolest month in Thailand's calendar, with refreshing temperatures ranging from 21°C to 29°C. You can expect dry, breezy weather and bright blue skies just about everywhere around the country except for the Gulf coast in the south, where the local monsoon season is underway.

This time of year is prime beach holiday season in Thailand, and spots like Phuket, Phang Nga and Krabi are among the best options. If you’re in Krabi, you might even be able to catch the Talay Waek or ‘divided sea’ phenomenon, when a walkable sand bar connects three islands at low tide. The late King Bhumibol’s birthday is also marked at the beginning of December – you’ll see gatherings of varying sizes around Thailand, and particularly large-scale street decorations and ceremonies in Bangkok's old town.

Eventi in Thailandia a dicembre

You’ll find the best weather in Thailand between November and April in the north, northeast and central regions, as well as along the Andaman Coast in the south. Temperatures range from 21°C to 37°C overall, but things are at their coolest in December and begin heating up as April approaches. The only part of Thailand where the weather isn’t great between November and April is the Gulf coast in the south, which is in the middle of its rainy season – that rules out islands like Koh Samui if you’re planning to spend time on the beach. 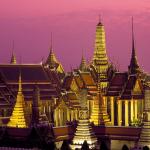 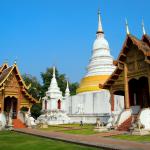 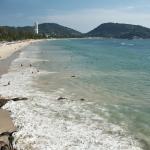 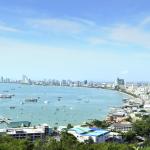 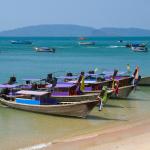 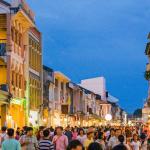