Be a Booker. Search hotels and more in Perth

All 550 hotels and more in Perth
Show map 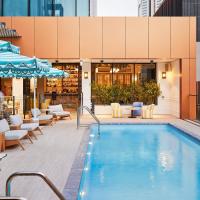 Featuring a fitness center, bar and views of city, Art Series - The Adnate is located in Perth, a 10-minute walk from Perth Convention Exhibition Center. Really well located and with generous room sizes. The stay was made so easy by staff that were friendly and went above and beyond. 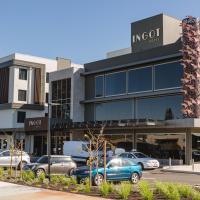 Conveniently located just 1.9 mi from Perth Airport, Ingot Hotel Perth features a heated outdoor pool, spa and fitness center. The people who work there!!!!!! The location close to the airport. The value for your money!!

QT Perth is a luxurious, designer, urban hotel in the center of Perth City, ideal for those who love to shop, dine and indulge. The staff were friendly and helpful. Loved the bathroom design,so cool.the bed was super comfortable. Loved having the tea kettle and am now addicted to nespresso! Featuring an outdoor swimming pool and a fitness center, The Westin Perth is in a prime location in the heart of Perth, ideally located 656 feet from Perth Concert Hall and 984 feet from the city's... Superb Stay. Very impressed with the investment by Westin and the quality of this hotel. Will be returning if prices remain as competitive as they are. Reasonable upgrade and late check out options too! 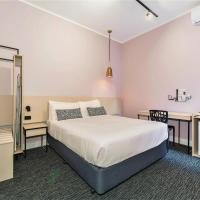 Located in Perth, 1969 feet from Perth Convention and Exhibition Center, Nightcap at Belgian Beer Cafe offers accommodations with a bar. We also had lunch at the property and it was awesome with 20% off too 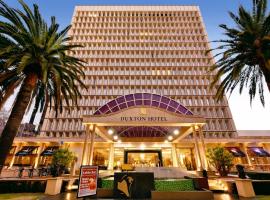 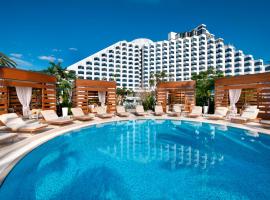 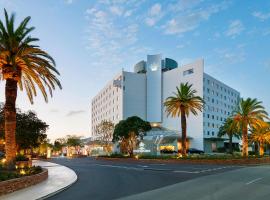 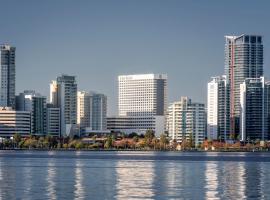 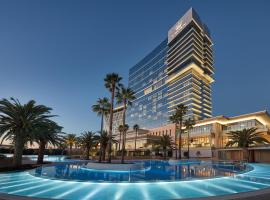 Featuring free WiFi and modern amenities, Aloft Perth offers modern accommodations in Perth. I love the room. It's just how I like.

Pan Pacific Perth is located in the Perth CBD, near the Swan River. Offering a large selection of guest rooms and suites, the hotel features an outdoor swimming pool and a 24-hour fitness center. high quality hotel , central location, welcome at arrival absolutely impeccable, cleanliness and...

Located on the banks of the Swan River overlooking the Perth city skyline, Crown Metropol Perth offers modern and stylish accommodations within a 15 minutes’ drive from Perth’s International and... The beds were comfortable and the bath luxurious.

Located in Perth CBD (Central Business District), the 5-star Duxton Hotel Perth offers luxury rooms in a great location. Facilities include a restaurant, bar, fitness center and outdoor swimming pool.... The hotel is beautiful. The food at the restaurant was outstanding (both breakfast and dinner).

Overlooking the beautiful white sands of Scarborough Beach, The Rendezvous Perth features an outdoor pool. Complimentary limited WiFi is available for guests. The rooms are very spacious and clean, great food and service. 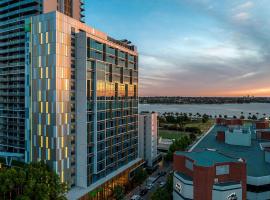 Peppers Kings Square Hotel is located in the center of Perth and only a 4-minute walk from Perth Arena. Friendly staff, nice breakfast and dinner. Metro Hotel Perth offers stylish and spacious accommodations, with most rooms enjoying panoramic views of the Swan River and Perth city. Facilities include restaurant and bar. Staff, free room upgrade!! Great breakfast and plenty of it.... 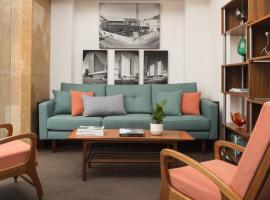 Pensione Hotel Perth is located right in the heart of Perth CBD (Central Business District), on the corner of Pier Street and Murray Street. It’s position, ideal for exploring Perth, the staff were great and it’s the staff who make a place... 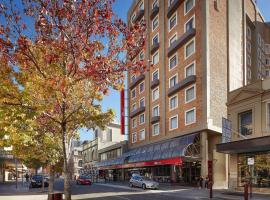 Located in the heart of Perth CBD (Central Business District), the Ibis Hotel sits just 984 ft from the Murray and Hay Street shopping malls, offers a trendy bar with live music and modern rooms with... Good Breakfast excellent location near bus stop and many restaurants close

Great Southern Hotel Perth is located just a 10-minute walk from Northbridge, the main cultural and entertainment precinct of Perth, and only a few minutes' walk from Perth CBD (Central Business... Good Breakfast and good reception service, very suitable for business travel for decorating of hotel... 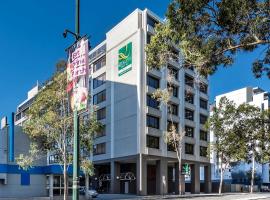 Featuring an outdoor swimming pool and a fitness center, The Westin Perth is in a prime location in the heart of Perth, ideally located 656 feet from Perth Concert Hall and 984 feet from the city's... Superb Stay. Very impressed with the investment by Westin and the quality of this hotel.

Located in the heart of Perth CBD (Central Business District), opposite a free bus city bus stop, a block from Perth Train Station and 7.5 mi from Perth Airport, Holiday Inn Perth City Center is an... - Clean n spacious room - friendly staffs - good location as it is just walking distance to the... 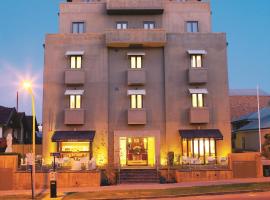 Ramada by Wyndham Perth The Outram is located in West Perth, just 10 minutes' drive from the city center. It combines impressive architecture with stylish accommodations. The hotel is adjacent to the Rundle Mall and is on the main lines for all the various busses. 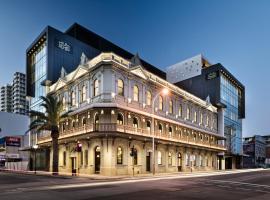 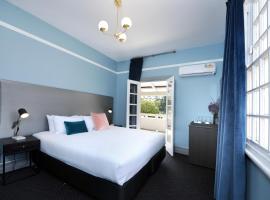 Featuring a restaurant, bar, garden and free WiFi, The Stirling Arms Hotel is located in Perth, 7 miles from Optus Stadium and 8 miles from WACA. I loved how friendly the staff were. The food was also very decent.

FAQs about hotels in Perth

Serene as the Swan

Sun-drenched and laid-back, Perth is simply a joy to be in. However, the West Australian capital does have tourist attractions, such as the Colonial-era mint, important in the country’s gold industry. East is the WACA, a must-see for cricket fans, and the city is also mad for Aussie Rules football.

The city center has the historic Government House and Supreme Court, both dwarfed by the ultra-modern skyscrapers a few streets behind. The best skyline view is from leafy King’s Park, near the War Memorial overlooking the Swan River below, named after its black swans. Across the river in Perth Zoo are more native animals including koalas, crocodiles and free-hopping kangaroos.

Boats to the zoo leave from the Barrack Street jetty by a sail-shaped bell tower. Other day trips from Perth include Rottnest Island and Fremantle, down the river in the opposite direction from Perth Airport.

The apartments, B&Bs and hotels in Perth are spread all over this fantastic city, interspersed with restaurants serving specialties such as western rock lobster and chili mussels. There are also a wealth of bars, many playing the indie music that the city is known for. Local brews from Swan Brewery and wines from the Swan Valley vineyards round off the evening. 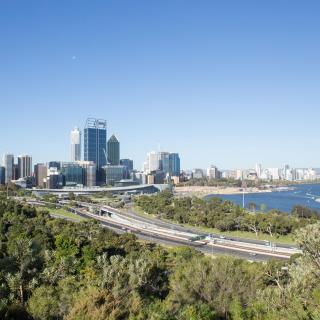 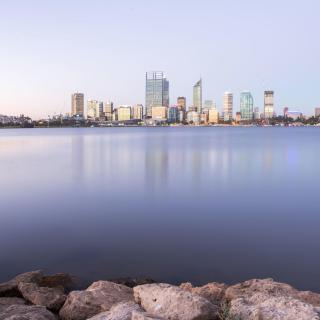 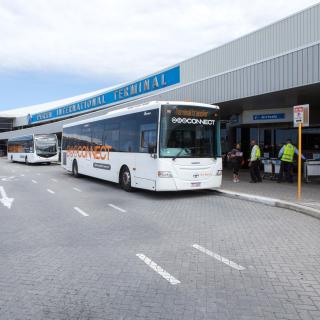 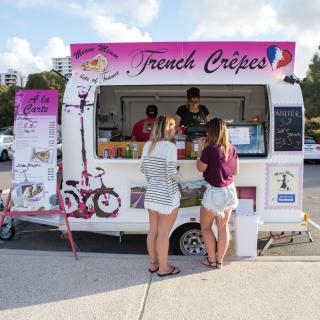 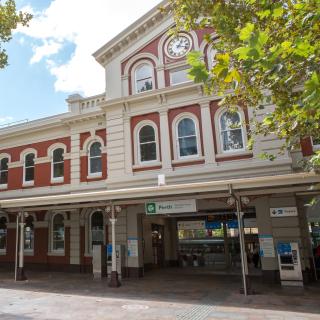 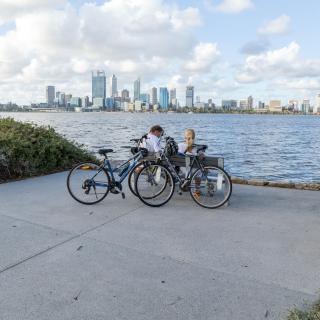 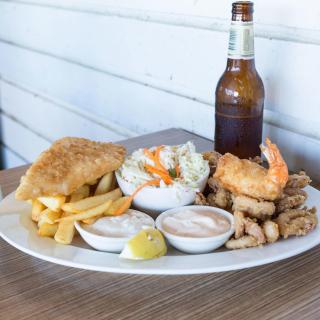