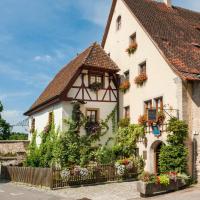 Set in a 12th-Century building, this hotel offers spa facilities and elegant rooms overlooking gardens and the beautiful Tauber Valley. It stands on the edge of Rothenburg’s Medieval town centre. The hotel location is perfect, inside the city walls (in fact even "on" the city walls", and only two minutes for the main square. Very quiet even though it is in the old town, so perfect location. Mr. Otto is THE perfect host, always friendly and making you feel welcome all the time! Nice breakfast with a wonderful view. We stayed in the three bedroom apartment and it was perfect! They have a very convenient park really close to the hotel. 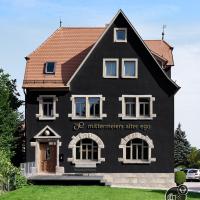 Mittermeiers Alter Ego is centrally but quietly set in Rothenburg ob der Tauber. This 4-star hotel offers chic, modern design as well as a honesty bar with tea, coffee and water. The trust bar and the room was amazing. 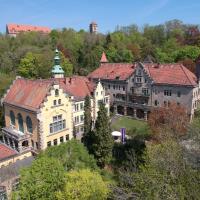 Wildbad Rothenburg Ob Der Tauber is set in an old spa hotel from the 19th century. The hotel features a picturesque garden and terrace. Each of the bright rooms is decorated in a modern style. The building and surroundings were unique and beautiful 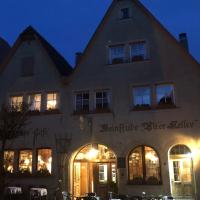 Offering free WiFi and a rich breakfast, this family-run hotel in Bavaria features modernised rooms in a historic building. It is situated in the medieval old town of Rothenburg ob der Tauber. Brilliant hotel in a great location just off the main market square. Lovely clean rooms and friendly staff for a great price. I will definitely be coming back!

This traditional hotel is located in the historic centre of Rothenburg ob der Tauber, 80 metres from St Jakob Church. It provides daily breakfast buffets. The hotel was sparkling clean and the authentic atmosphere made us feel at home. The host was extremely kind and helpful. As soon as we arrived, he offered us warm apple drinks, which was very thoughtful. He also recommended us some things to do in the city. We really enjoyed our stay at this place. Would recommend to anyone!!! 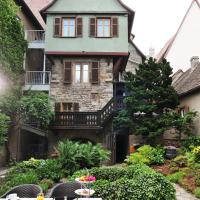 This hotel offers a restaurant, a Baroque garden and free internet in all rooms. It is located in one of Rothenburg’s oldest buildings and stands directly opposite the Franciscan Monastery. Great hotel, extremely friendly and helpful staff, beautiful location, great breakfast 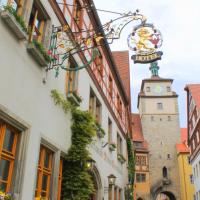 This traditional, 16th-century hotel offers Franconian food, a fitness area and country-style rooms. It stands in the centre of Rothenburg, a 2-minute walk from the St. Jakob church. The hotel has everything one needs and can ask for: very helpful and friendly staff; great breakfast to get your day started; excellent location in the “old town”; a large bath tub in the room with super hot water; Wi-Fi which works!; my room was on the corner, so it was full of windows and very bright; there was no sign of bad smell anywhere; I think I can’t complain about the beds because I was mostly asleep while on mine (-.-)zzz ; moreover, there’s even an elevator if you really need it (2 stories?! Old hotel?! That’s quite a privilege!). I didn’t specifically book this hotel so I could enjoy the wellness options, but just in case I got caught by bad weather, I did - in the end, I didn’t have a chance to check out the sauna&fitness places because the weather was fantastic and the city is just tooooo beautiful and magic to “waste” my time sweating indoors! XD I would love to stay there again and I do recommend it! Next time, I would even come with my husband and small kids! My senior mother also found it very comfortable and convenient. :) 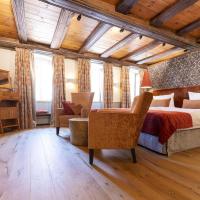 This historic hotel was built in 1264 and is located at the Markusturm tower in medieval Rothenburg. It features a traditional restaurant and free Wi-Fi internet throughout the hotel. It was amazing mini holiday! The apartment was spotlessly clean, personnel very helpful and kind. We even had a parking for a large van nearby. And truly best fresh food for breakfast I've ever tasted. We'll definitely come back again very soon! 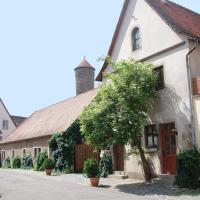 This traditional hotel is situated in a quiet side street in Rothenburg ob der Tauber town centre. It offers spacious rooms and a large breakfast buffet each morning. Friendliness and caring of the owner. Breakfast was great. 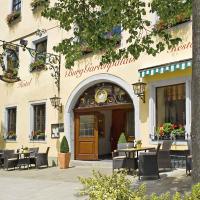 This charming hotel lies in Rothenburg’s Old Town, between the marketplace and Castle Gardens. It features a rose garden, free Wi-Fi, and grand interiors with Renaissance details. Great location. Restaurant was good. All staff encountered were very professional. 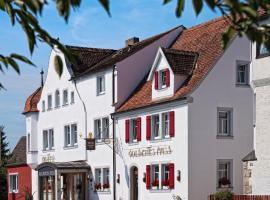 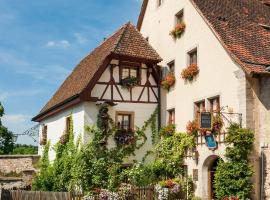 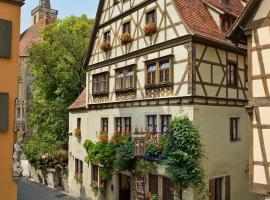 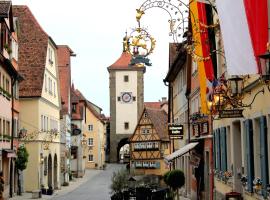 Boasting unique views of the Tauber river valley, this charming hotel in Rothenburg offers a peaceful break amid the mediaeval architecture and scenic landscapes of the Middle Franconia region. The hotel is central and close to everything. The staff are friendly and very helpful.

This historic 4-star hotel in Rothenburg offers modern and traditional rooms, spa facilties and on-site parking. It is located in the heart of the medieval Old Town. The location was just perfect! 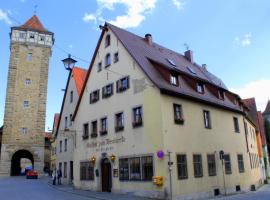 This 3-star, bed and breakfast, family-run hotel in Rothenburg is ideally located on Franconia’s famous Romantic Road, just steps away from the railway station, and the historic Old Town district. Breakfast is simple but very good, not so far to the Mark, parking lot is available

This 3-star hotel is in a quiet side street in the historic town centre of Rothenburg ob der Tauber. It offers a friendly family-run atmosphere and traditional Franconian cuisine. Location, scrupulous clean, great food and fabulous staff( Dagmar, Klaus etc!!!) 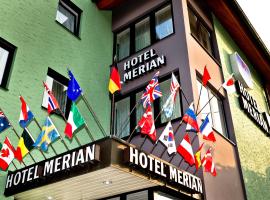 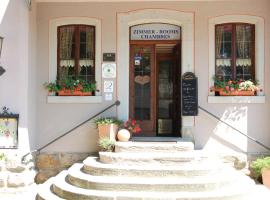 This family-run hotel is a 17th-century building at the heart of Rothenburg ob der Tauber's historic quarter, beside the old town walls. Traditional German cuisine is served here. The property was outstanding! Room was huge and super clean. 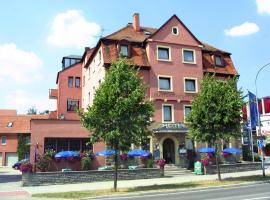 This hotel is directly beside Rothenburg ob der Tauber Train Station, near all historic attractions. It offers comfortable accommodation and free public parking at the hotel or nearby. Great location, very reasonably priced, car parking was a bonus

This guest house is an 800-year-old building in the heart of Rothenburg ob der Tauber. Gästehaus am weißen Turm offers country-style rooms with classic wooden furniture. Simple and comfortable! We only stayed for one night, but we enjoyed our short stay. 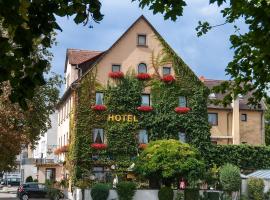 The family-run Hotel-Gasthof Post is located just 150 metres from Rothenburg Train Station, and 500 metres from the Old Town. It offers quiet rooms, a garden and a daily breakfast buffet. the owner very helpful in changing some difficult booking changes. 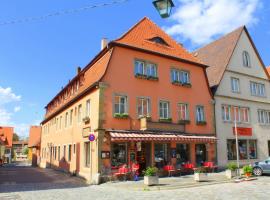 Hocher Hotel & Café stands in the Medieval centre of Rothenburg ob der Tauber, a 5-minute walk from the town hall. The hotel features free WiFi and a café with terrace. I really liked the lady who helped as around. She smiles a lot and is very welcoming! 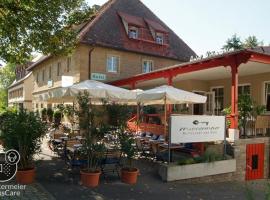 Set within a traditional villa, this charming hotel is situated directly opposite the Würzburger Tor gate, or Galgentor, in the romantic Franconian town of Rothenburg ob der Tauber. Great room and location. Easy parking 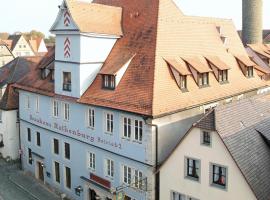 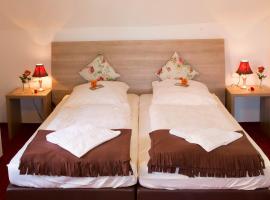 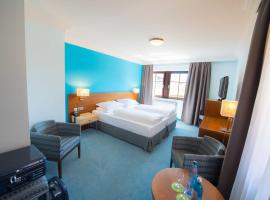 The Prince Hotel Rothenburg is situated within the city walls and lies near to all attractions of the city, but without the noise that could perhaps disturb you when you are sleeping. Great location. Close to the Royal Palace and Piazza Costello. Spacious with three bathrooms.

Out of a Fairytale

The half-timbered buildings, cobbled streets and brightly painted façades of medieval Rothenburg ob der Tauber wouldn’t be out of place in a fairytale. Several fantastical films have been set in this gem on the scenic Romantic Road, passing from Würzburg to Füssen via Bavaria’s most enchanting towns.

Uniquely designed gates allow access to the historic centre through walls partly covered with tiled roofs. Walking along the walls offers a different perspective of the town’s colourful flowers, step gables and towers. The town hall has the tallest tower, whose far-reaching views include the large Marktplatz, home of the Christmas market. The Christmas Museum is a year-round winter wonderland, as is the shop of Käthe Wohlfahrt, the internationally renowned German Christmas decoration producer.

In the River Tauber valley outside the centre are lush gardens, one containing Toppler Castle, a bizarre structure resembling a house on a tower. Also in the valley is a double-arched stone bridge.

The Rothenburg ob der Tauber accommodation on Booking.com includes traditional guest houses and family hotels with a spa and parking.