Be a Booker. Search hotels and more in Nîmes

Hotels and More in Nîmes

All 201 hotels and more in Nîmes
Show map

Renovated in 2019, Hotel Majestic is located in Nîmes, just 1050 feet from the Arenas of Nîmes and the town center. Great job with the renovation! Lots of shelves and hanging area as well as outlets for charging your devices!!

Located 1.9 mi from Nimes’ Arena, the Mas de Boudan is a boutique hotel that features two restaurants, Bistr'Au and Restaurant Gastronomique, which has a Michelin star. From the moment I booked the room the hotel went out of their way to make sure we had everything we needed to make for a superior experience. They double checked the reservation, inquired as to dinner reservations and assured that our room would be ready when we arrived The room was inviting, the dinner superb and the breakfast outstanding. We will definitely stay again if in the area. 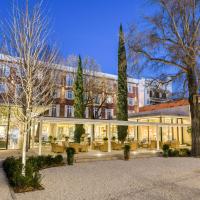 Maison Albar Hotels L’Imperator is a luxury hotel located in the city of Nimes. The location, hotel amenities, the welcoming staff, and the concierge. 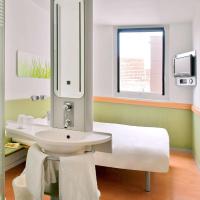 Located just 165 ft from Nîmes Train Station, the ibis budget Nimes Centre Gare features a 24-hour front desk, luggage storage and free Wi-Fi access in the entire hotel. It’s always a pleasure to come and stay in that property. Clean, cosy and staff super friendly. I would recommend it. 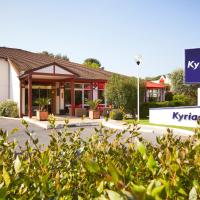 Located a 10-minute drive from the center of Nîmes, this 3-star hotel is ideally located 1.2 mi from the exit 25 of the A9 motorway. Perfect just off A9. They gave us a free upgrade. First time we have stayed in any of their hotels would definitely stay again. The restaurant 2 min walk away was first class 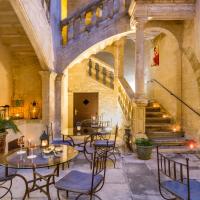 Located in the center of the historic town of Nîmes, Hôtel Marquis de la Baume is a 17th-century town house just 2.3 mi from Parc Expo Nîmes and 2133 feet from Nîmes Arena. Free WiFi is provided. Location excellent.Nimes it a top place to visit although not so well known.Historic,clean,picturesque.

Located right next to the exit 25 of the A9 motorway, ibis Nîmes Ouest is located 2.5 mi from the center of Nîmes and 7.5 mi from Nîmes Airport. On a two day trip by car from Almería, Spain to Limburg, Holland this hotel is exactly halfway at the A9 Nîmes-Ouest exit, so very convenient. It has plenty of gated secure parking space available without reservation or additional pay. Bed and shower are excellent, as with most Ibises. The wifi is included in the price and speed is great. Nice terrace and swimming pool. Cosy bar. Check-in and out efficient and by very friendly attendants. One of the best Ibises we’ve been too and we’ve seen quite a few. 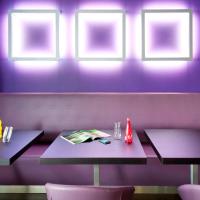 Located across from the train station in Nimes, this hotel provides low-cost rooms with free Wi-Fi access and satellite TV. Breakfast was good but very crowded. Nice Hotel. 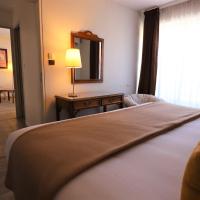 Hôtel des Tuileries is close to the center of Nimes near the famous Arenas de Nimes. It offers comfortable 2-star accommodations with free Wi-Fi access throughout the hotel. Hospitality was warm and welcoming. What a lovely and intimate little hotel. I went on my own and met up with friends who were equally ‘at home’ there. Just what we all needed. Bravo 👏🏻 Great location too👌🏻 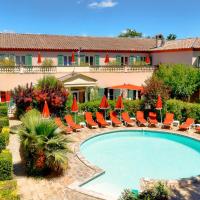 Located 0.6 mi from the historical center of Nîmes, Best Western L'Orangerie inhabits a 19th century-style building in a park with centuries-old plane trees. The place is beautiful, the staff is super friendly and helpful, the swimming pool much appreciated on hot days. Its been great to find such a place, that happens to be pet friendly. 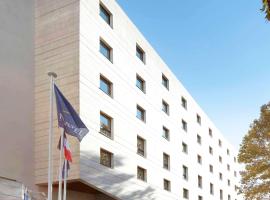 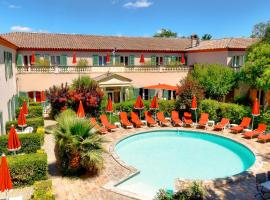 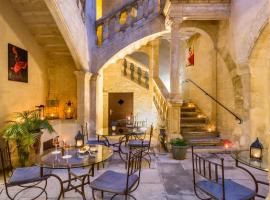 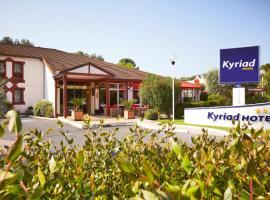 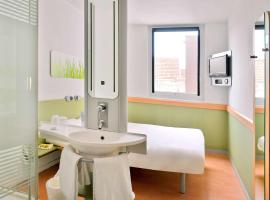 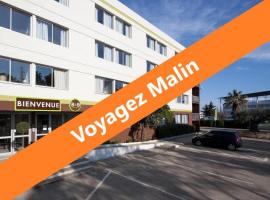 Grand Hôtel de Nîmes is located 1.2 mi from the center of Nîmes. It offers air-conditioned rooms and free WiFi access. The 24-hour bar has a terrace that opens onto the outdoor pool and the garden. The hotel it’s very nice . You can have the best holliday .

Located on one of the most beautiful avenues of the city, the hotel is only a 5-minute walk from the Roman monuments. Staff was warmly welcoming and helpful throughout our stay. 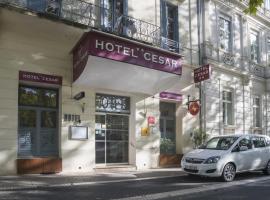 Located 3 minutes' walk from Nîmes Train Station in the heart of Nîmes, Citotel Hôtel Cesar is 1.6 mi from Parc Expo Nîmes and 2133 feet from the Arena of Nîmes. We will come back again. Everything about the hotel and suroundings was beter than we expected.

Kyriad Nîmes Center hotel is in the heart of Nîmes, integrated in the oldest district of the city close to the Roman arena, the Maison Carrée, museums and shopping streets. Free Wi-Fi is provided. Dwcorayion, posters on the walls celebrating Nimes festivities was fantastic 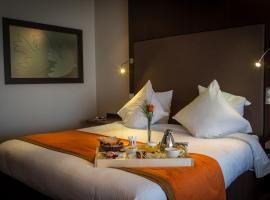 Located a 10-minute drive from Nimes city center and 9.3 miles from the Nimes-Arles-Camargue Airport, this 4-star resort offers free access to the Vatel’s Spa and fitness center, where facilities... Location, cleanliness and staff friendliness

Set in the heart of Nîmes, Royal Hôtel features an on-site restaurant, La Bodéguita, which opens onto Assas Square. Everything. Location, food, fabulous and friendly staff. The staff were very helpful and courteous.

Located in Nîmes city center, this hotel is just minutes from the Train Station, the Arènes Roman amphitheater, and the town’s main square. helpful staff when something wasn't working, Good coffee and freedom to look and choose as often...

Located near Exit 25 of the A9 Motorway in Nîmes, HÔTEL B&B Ville Active is 1.2 mi from Cap Costières. It offers a terrace, free WiFi and secured parking. The location is very convient 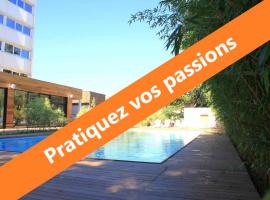 Offering an outdoor pool, C Suites is a urban resort located in Nîmes just 1.9 mi from the Arenas. It was clean and they have good service 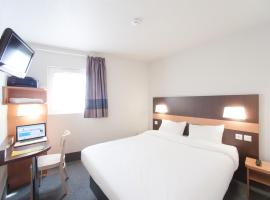 Hôtel B&B Nimes Center Arènes is located in Nîmes. Free WiFi access is available. It is 3117 feet from the Arena of Nîmes. Each room here will provide you with a flat-screen TV and air conditioning. close to shops, museums and historical sights. Clean and tidy rooms Great value for the area.

Set within a 1.5 hectare wooded park, Nimotel is located 0.6 mi from the A9 motorway and a 10-minute drive from central Nimes. It has 24-hour reception, a secure outdoor pool and free WiFi access. This hotel was clean and the staff very helpful, but we didn't try the breakfast as we needed to... 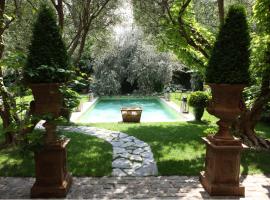 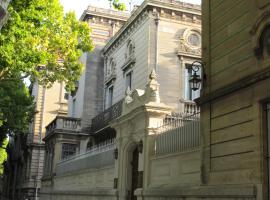 Located in the center of Nîmes, La Maison de Sophie offers boutique hotel accommodations in a listed building from the 1900s. The property also offers a garden and an outdoor swimming pool. Loved everything. Will go back 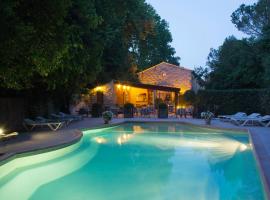 Le Pré Galoffre enjoys a quiet, rural setting, a 10-minute drive from central Nimes. It has an outdoor pool and sun terrace and offers free WiFi. The room was very nice and the hotel was in a very nice location. 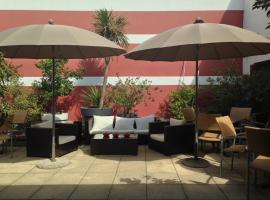 The Originals City, Hôtel Costières, Nîmes is 0.6 mi from Costière Stadium, next to exit 25 of the Nîmes-Ouest A9 motorway. It offers soundproofed rooms with free WiFi access and an on-site... 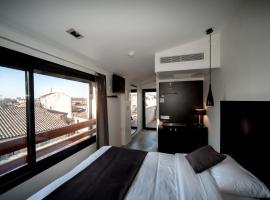 Central Hotel is set in a renovated, 18th-century building, in the historical center of Nimes, right behind the ancient roman site, the Porte d’Auguste. Very modern in an historic building. The owners were extremely nice and helpful. 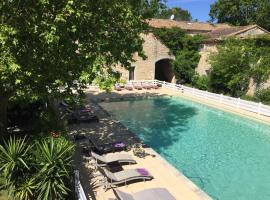 Located a 5-minute drive from the center of Nîmes and Camargues, Hotel Mas de Galoffre, set in a Provençal estate, is an ideal starting point to discover the region and many activities. Having walked down a very strange corridor to our room and having to almost force the door open we... 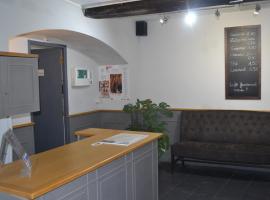 Located on a pedestrian street in the center of Nîmes, Hotel Concorde offers simple guest rooms equipped with free Wi-Fi access. The ancient Roman Arena of Nîmes is 656 feet away. The man who did the check in was really nice to us and the room were clean, in the centre,...

FAQs about hotels in Nîmes

The Glory of the Roman Empire

With arguably the most impressive Roman heritage outside Rome, Nîmes is truly a sight to behold. Its most awe-inspiring structure is the virtually intact Roman amphitheater. The gladiators are long gone, but a matador statue outside gives an idea of its current use, which is most celebrated during the annual Feria.

Another amazing Roman monument is the Maison Carrée, a colonnaded temple. The Temple of Diana is less well preserved, but still maintains some of its arched roof and interior details. The peaceful, surrounding Fontaine Gardens cover the grounds of the former Roman baths and still contain elegant water features.

Speaking of water, the incredible Pont du Gard is a triple-arched Roman aqueduct crossing a river northeast of Nîmes. Other Roman remains include the Tour Magne, and 2 gates that allowed access through the city walls.

The Nîmes Archaeological Museum in the former Jesuit college provides background to this history and also houses the Warrior of Grezan, a pre-Roman statue. Another museum houses a fine arts collection, and the simple cathedral is also worth visiting.

In addition to plenty of restaurants and bars, Nîmes has a good range of accommodations. Booking.com’s options include luxury hotels by Parc Expo Nimes, and cheap apartments near the train station, all easily accessible from Nîmes-Alès-Camargue-Cévennes Airport.