Search hotels and more in Mestre

Hotels and more in Mestre

All 386 hotels and more in Mestre
Show map

Offering air-conditioned rooms in the Stazione Mestre district of Mestre, the 4-star Leonardo Royal Hotel Venice Mestre is 2.3 km from Museum M9. Everything was fine ! Like always in each hotel Leonardo in other countries.

This property offers a Special Protection Program, including a free health insurance during your stay. The staff is wonderful, always willing to go out of their way to help you. The hotel was clean, the bed comfortable, the breakfast plentiful (7 euros!, excellent). The bus and train stations are across the street, with travel into Venice only 10-15 minutes and no more than 1.80 euros. 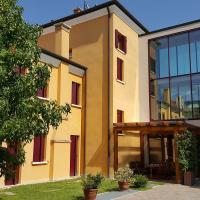 Villa Costanza is a 3-star superior hotel 250 metres from Mestre Train Station, with frequent departures for Venice. Location. Breakfast. All the staff was perfect. We had indicated that we was on honeymoon and they putted champagne, rose leafs and decorated the room for us. I will stay again if i will back again to Venezia. Thank you. 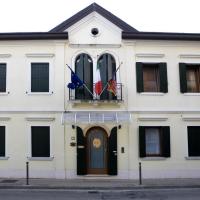 Located 200 metres from Mestre Station, staying at Hotel Cris means you can reach Venice in a matter of minutes. Private parking is available for all guests. I always like staying here. It is a comfortable hotel with very friendly staff. The breakfast is good. The location suits me perfectly as it is close to Mestre station. 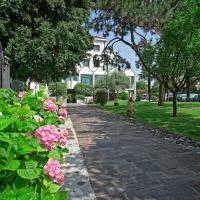 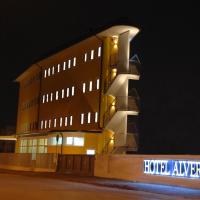 The Alverì is set in a new 3-storey building in the new business area and offers free parking and soundproofed rooms. Nice and clean room, excellent breakfast.

This property offers a Special Protection Program, including a free health insurance during your stay. Best Western Plus Quid Hotel Venice Mestre is a 4-star design hotel located in Mestre. My kitties and I LOVE LOVE LOVE Quid BW!! We love the staff, the amenities, the customer service, the food.... EVERYTHING!! We will be back in August! Set on Via Orlanda roadway, this 4-star Hilton Hotel is midway between Venice's historic centre and Marco Polo Airport. It offers private parking, free WiFi throughout, and an outdoor pool. The room are very comfortable and beautiful,they have everything we need for our stay,the breakfast is very tasty and good and the dinner too. 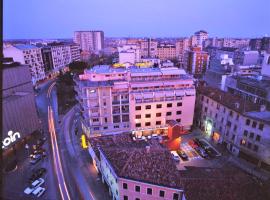 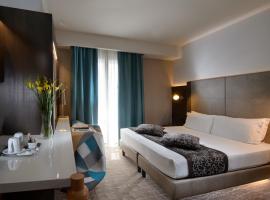 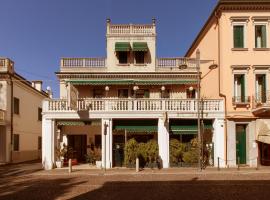 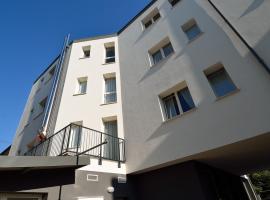 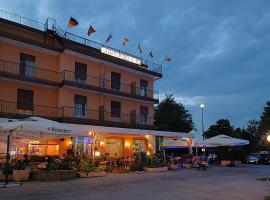 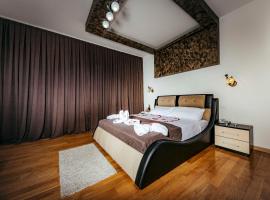 Just in front of Mestre Bus and Railway Stations, Hotel Trieste features free Wi-Fi, and on-site parking. It offers air-conditioned rooms with a minibar and satellite TV. It was very cozy! Staff was super friendly and extra helpful. Definitely will come back again!!! 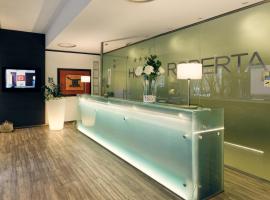 Located in Mestre, just across the lagoon from Venice, Hotel Roberta offers air-conditioned rooms with flat-screen TV and satellite channels. Internet access is free. Pleasant clean room. Staff very helpful. Close to train and bus stations and easy to get to Venice.

Stay in this 3-star hotel in Mestre and you will have large and bright rooms, and nearby public transport connecting you to Venice. Enjoy free private parking on site. Friendly staff. Clean room. Great location. 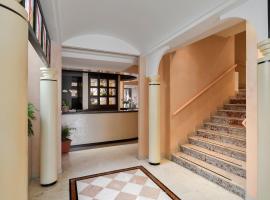 Offering free Wi-Fi and free bikes, Hotel Garibaldi is located in the pedestrian area in the historic centre of Mestre. A frequent bus runs to Venice and the Lagoon in just 20 minutes. The entire hotel staff was amazing. I felt like I got 5 star service the whole time. 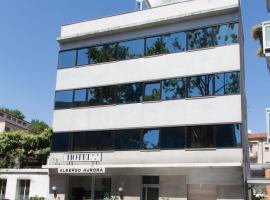 Hotel Aurora is right in front of a bus stop offering direct links to Venice, and Venezia Mestre Train Station is located 2 km away. It features air-conditioned rooms with TVs. The people at the reception, all three of them, are amazing. Really really helpful! 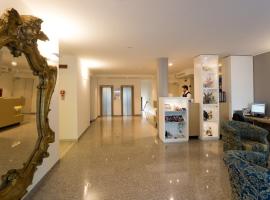 Airmotel is in Mestre, next to the A4 motorway exit and about 2 km from the Ospedale dell’Angelo Hospital. You can leave your car at the free car park and catch the bus to Venice. Everything was good. Good location, clean rooms, hard working room keepers. 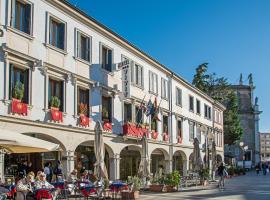 Hotel Al Vivit is located in the famous Piazza Ferretto, a sociable spot in the pedestrian centre of Mestre. 10/10, the very center of Mestre on the main square. The room itself is very very clean and... 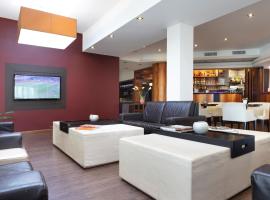 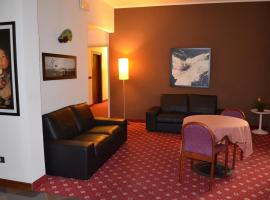 Hotel Adria offers air-conditioned rooms with free Wi-Fi and satellite TV in Mestre. Buses to Venice depart from 100 metres away. The staff was very friendly. The room was clean and quiet.

This property offers a Special Protection Program, including a free health insurance during your stay. Location, service, amenities and value! 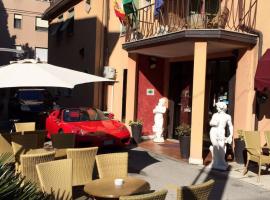 Situated in a peaceful secondary street in Mestre, Hotel Delle Rose is a 10-minute tram ride from Venice, and 8 km from Marco Polo Airport. Very polite and helpful staff, parking on site , close to tram.

With stylish contemporary design, NH Venezia Laguna Palace is set in 2 buildings, linked together by a transparent glass roof. A marina is also available. They made our stay amaizing. Rooms are very clean and confortable, and at the breakfast you have a... 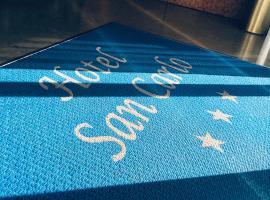 The San Carlo is situated in a central position in Mestre, a 5-minute walk from the bus stop providing 24-hour links with Venice. The room very clean and the staff very nice.

Elite Hotel Residence is located in Mestre, a 10-minute bus ride from Venice and 9 km from Venice Marco Polo Airport. It offers free Wi-Fi, free parking, and modern, air-conditioned accommodation. Staying at Elite Hotel for business every year, easy to get from the airport by bus, several...

Conveniently situated in the Stazione Mestre district of Mestre, 7 Days Premium Hotel Venice - Mestre is located 2.1 km from M9 Museum, 2.8 km from Ferretto Square and 2.9 km from Torre dell'Orologio.... The hotel is very close to the bus station that takes you to Venice. It is only a 15 min drive. Set on Via Orlanda roadway, this 4-star Hilton Hotel is midway between Venice's historic centre and Marco Polo Airport. It offers private parking, free WiFi throughout, and an outdoor pool. The room are very comfortable and beautiful,they have everything we need for our stay,the breakfast...

Four Points by Sheraton Venice Mestre offers design rooms, a fitness centre, and free WiFi throughout. Outdoor parking is free, and there is a bus stop just outside the hotel. Very friendly and helpful staff, comfortable and large bed, fast internet, good cocktails in the... 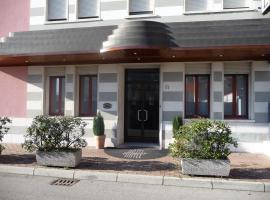 Hotel Paris is less than 100 metres from Venezia Mestre Train Station, a 7-minute journey from Venice. All guest rooms are equipped with a 26" LED TV. Its a very nice clean hotel 2 min walk from the train station. 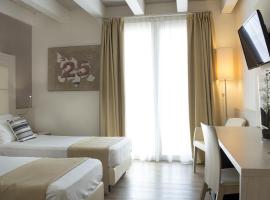 Hotel Alexander is only 10 minutes by public transportation from Venice. At 2 km from Mestre Train Station, its immediate surroundings feature shops and restaurants. It offers free parking. location is really good to take a tram to visit venice.

Surrounded by green fields, Villa Sara features a restaurant, and an outdoor pool with hydromassage jets. Its classic, air-conditioned rooms are 10 km from Venice. Parking is free. Hotel Villa Sara has new, young owners, who are very friendly and helpful. 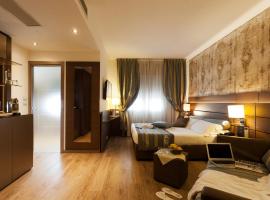 Located 200 metres from the historical centre of Mestre, Hotel Apogia Sirio offers free Wi-Fi, restaurant and bar. Venice is just a 15-minute bus ride away that stops just 30 metres from the hotel. The location, the super helpful staff, the breakfast, the room...everything was great.

Hotel Guidi is located in Mestre's Via Forte Marghera, and overlooks Canal Salso, the ancient waterway that connected Venice to the mainland. Venice’s centre is just 10 minutes away by bus. All the information about Venice we got at the checkin.

FAQs about hotels in Mestre

The Cheaper Way to See Venice

Located just across the lagoon from the Venetian islands, Mestre is the mainland part of Venice and offers cheaper accommodation, with easy transport links to the historic centre. However, the city has more than just cheap hotels going for it.

Host to several festivals throughout the year, huge Parco San Giuliano offers fantastic views across the lagoon towards the Campanile and dome of St Mark’s Cathedral. Also worth a wander round is Forte Marghera, a former Austrian fortress on an island in the middle of star-shaped canals. One canal continues into the centre of the city and is lined with restaurants and bars.

Pavement cafes can also be found in Piazza Ferretto, a triangular square with a 12th-century clock tower at one end and the Teatro Toniolo at the other. This popular spot for a passegiata also has a modern fountain and several boutiques. Also good for shopping in Mestre is the Le Barche centre, a rather uninspiring building from the outside, but packed full of stores.

As for nightlife, Mestre has a number of clubs, including one at Tessera near to Venice Marco Polo Airport. Don’t fly out of there without having tried the little homemade cakes called ‘mignon’.