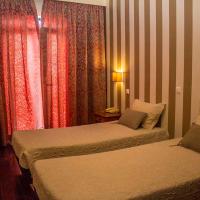 Located in Palmela, a picturesque town not far from the city of Setúbal, this 2-star Hotel offers guests comfy accommodations to affordable prices. The staff was amazing! My already late arrival was held up by an awful fun fair in full swing in the garden in the street up the hill from the Varandazul and, in fact, entry to the street the hotel was on was blocked by highway police. Fun Fair attendees were parking willy-nilly all over the place and I was sure I was not going to find parking near the entrance and, at that late hour, would be reduced to schlepping my anvil collection down the famously cobbel-stone portuguese streets. But when the police officer let me drive thru the barricade pointing the way to the Varandazul and I got in the door and to the reception desk and asked the kind night man if there was any chance of leaving the car where it was, he said, 'Claro! Por favor!' and a great worry evaporated immediately. The next morning, after I'd seen a piece of needlepoint in a frame which seemed to be announcing breakfast and asked the morning attendee where the breakfast was being served, he informed me there wasn't actually breakfast as part of that room. And as I was saying, 'Ah, my mistake then.' he immediately started into explaining that, however, another guest had cancelled his breakfast reservation and that I'd be welcome to it. After a lifetime of staying at every sort of hotel, this level of attention to a guests needs is rare enough to find anywhere let alone an establishment sporting a mere 2-star rating. 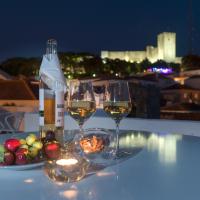 Located in Palmela, Porta da Arrábida Suites features a terrace. The accommodations provides a shared lounge and free WiFi. A continental or buffet breakfast is available each morning at the property.... Everything was great and would stay at this hotel if we are in that area. 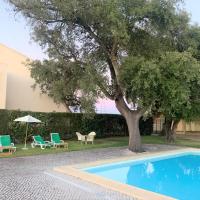 Amazónia Palmela is set just outside of ancient Palmela and next to the Autoestrada do Sul. It features an outdoor pool area and apartment-style accommodations with private balconies. absolutely everything ! the staff is well-dedicated and always available. 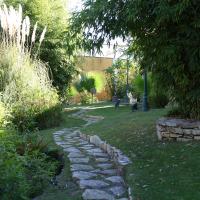 Offering an outdoor pool surrounded by garden, Quinta Lagus Resort is located in Palmela. Free WiFi access is available in this country house. Did like all...Thanks to Vasco, quite sweet and helpful! But overall, was really good 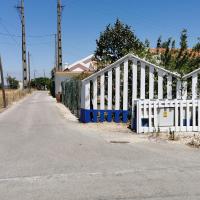 Located 3.1 mi from Palmela, a 30-minute drive from Lisbon city center, the Retiro dos Batudes guest house offers colorful bedrooms with private bathrooms. The flexible check in provided by the host, who was available until 11:30pm in the evening, not very common lately & the fact that the room was sparkling clean. 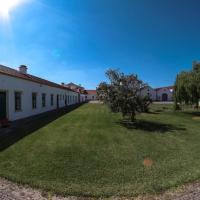 Located in Palmela, 3.2 miles from Montado Golf and 29 miles from Jeronimos Monastery, Casas do Monte provides accommodations with free WiFi, air conditioning, a bar and a garden. Very spacious flat. Everything you need. Very ckean. Good value for money. It's good for long term stay. Nice garden. I recommend.

Located 8.1 miles from Montado Golf, Y.Palmela - Boutique Apartments offers barbecue facilities, and accommodations with a balcony and free WiFi. I love it’s location just under the castle with the beautiful sunrise view. The artistic style of the apartment was just my cup of tea! 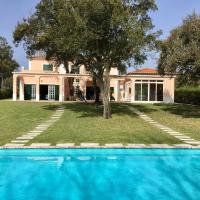 Providing garden views, Casa Bagatelle in Palmela provides accommodations, free bikes, a garden and a terrace. Complimentary WiFi is featured throughout the property. Loved the breakfast, and that they were super friendly and open. The surroundings of the villa was beautiful, placed in a nice and calm area. Few rooms and guests. The room and bathroom was great and spacious, everything was clean. 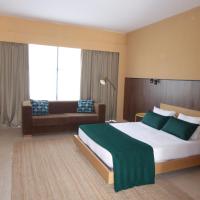 With garden views, LH Palmela Apartamentos is located in Palmela and has a restaurant, a shared lounge, snack bar, garden, seasonal outdoor pool and playground. it was very close to my son’s home.