Find the perfect place to stay in Manchester

Top things to do in Manchester

Attractions, tours, and activities in Manchester

Find a great area to stay in Manchester

Including tips for the best time to visit Manchester

Manchester is the third-largest city in England and has its roots in industry and expressionism. It's the birthplace of the Industrial Revolution and home to some of the UK’s most celebrated musicians.

This spirit lives on in a thriving media industry and an array of great museums. Visit the Museum of Science and Industry to learn all about the city’s industrial past and scientific achievements, or delve into sports history at the National Football Museum.

If you're looking to catch a game, head straight to Old Trafford to watch the country’s biggest football club, Manchester United. If tickets are all sold-out, you can either take a stadium tour or just watch their rivals, Manchester City, on their home turf.

Manchester is also famous for its nightlife and music scene. Roam the bars and clubs lining Oxford Road or the Northern Quarter for indie anthems and dance classics by bands like Oasis and The Smiths – two of Manchester’s greatest rock‘n’roll exports.

The city is well connected by trams, buses, and trains to Manchester Piccadilly, the central train station.

Points of interest in Manchester

Stay near the top sightseeing spots in Manchester

Inspiration and insider tips for things to do in Manchester 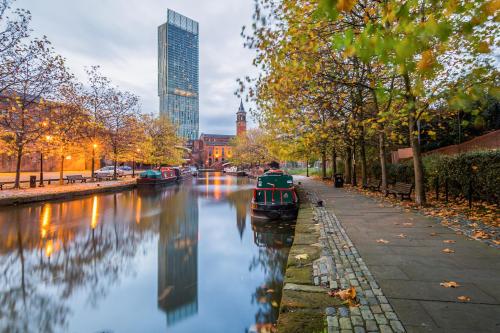 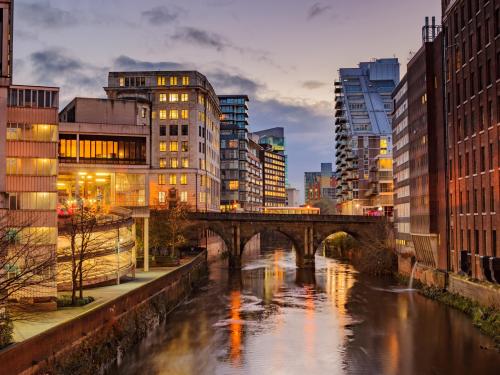 What other travelers say about Manchester

Good tram system....from airport to centre and to outskirts, change where applicable There is also a free bus service from Piccadilly train station around the city centre For alternative shopping etc, go to the Northern Quarter, pop into Afflecks Palace...wander around the area look at street art... Great music scene in Manchester and Greater Manchester....really good metal scene....

Had a great night out, lots of lovely bars and restaurants to choose from. Lively, fun and sociable. We ate at The Ivey and drank at The Alchemist. Travelled by train and by tram. Also used a local taxi. All good.

The development of the Northern Quarter is astounding. So many great places to eat, drink and hang out! Fully recommend staying round this area where once I would have absolutely avoided staying near Piccadilly station.

Grew up in Manchester but moved away over 30 years ago. Today the city is now unrecognizable. The City center looks brand new with so many new builds and skyscrapers. Visited City center, Trafford center , Salford Quays, Didsbury village and Etihad stadium. All excellent venues

Nice galleries and shops. A good variety of places to eat a diverse range of foods from across the world. Moose Coffee has great pancakes and I can't believe I was able to find a place that has Grits on the menu. Very happy about the walkability as well. The only thing I didn't quite like is the sanitation of the place and the fact that everyone smokes. For someone with asthma it's a very difficult environment to be in.

My visit was to attend the Visa center so ,I was only in the city for 2 days. I stayed at Salford Quays, what a great place to spend an afternoon walking, enjoying the attention to detail. A lot of thought has obviously been put Into the place. I was very impressed with the cleanliness and saw many impressive buildings old and new. The people we very helpful and friendly. I loved the trams, cheap, and convenient. I wish they were all over the UK. Hopefully I will have the opportunity to return and have more time to explore.

Popular places to stay in Manchester

Stay in some of the best accommodations Manchester has to offer

Other accommodations in Manchester

Pick from a wide variety of places to stay in Manchester

Other attractions and activities in Manchester

More things to do and see in Manchester