Find the perfect place to stay in Seoul

Top things to do in Seoul

Attractions, tours, and activities in Seoul

Find a great area to stay in Seoul

Including tips for the best time to visit Seoul

Old and new coexist in Seoul, South Korea's capital and largest city. Skyscrapers dominate the sprawling metropolis, whose streets are lined with mega malls and karaoke bars blasting K-pop alongside well-preserved remnants of Korea's past. Against a backdrop of glass and steel buildings, Bongeunsa Temple and Jogyesa Temple are tranquil respites where visitors can witness the lifestyle of Buddhist monks. Jongmyo Shrine – the world's oldest Confucian shrine – honours Joseon Dynasty rulers.

Shopping is a favourite pastime in Seoul, where you'll find endless opportunities to lighten your wallet. Dongdaemun, one of the city's largest shopping districts, sells everything from silks and electronics to traditional Korean cuisine. At Gwangjang Market, the country's oldest street market, you can pick up fresh produce, handicrafts, textiles and more. You'll also need ample time to explore Lotte World Mall's 17 floors of retail space, aquarium and indoor theme park.

Navigating a city as big as Seoul can be daunting. Luckily, the capital features one of the most extensive transit systems in the world. Seoul Station services commuter and intercity trains, which can take you to the plethora of shops near Myeongdong Station or Gangnam Station for entertainment and nightlife.

Points of interest in Seoul

Stay near the top sightseeing spots in Seoul

Inspiration and insider tips for things to do in Seoul 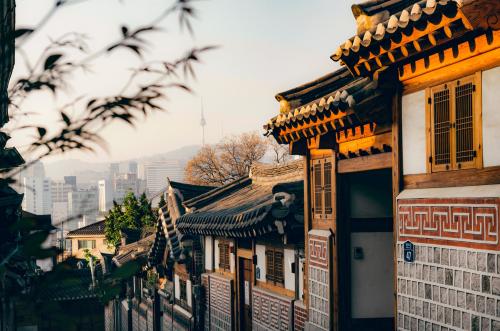 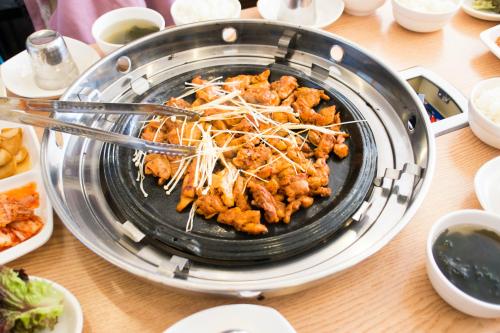 What other travelers say about Seoul

The accommodation was very close to the subway station. There are convenience stores and many restaurants just a minute away from the hotel, so it was convenient. The dining table was a folding table, which was a bit inconvenient, but the bed was large.

I had only one and half day in Seoul on my bussiness trip but it was splendid! I enjoyed the food market which is famous from netflix and I can totally recommend. I visited the lotte world tower with amazing view. i tried Sul-bing icecream and lots and lots of food like traditional Korean BBQ, street food, kimchi and so on as well as japanese sushi. I went on a party in Itaewan.

Love the public transport system. Very well connected and minimum walking was required to even the most obscure of destinations. Love the Han River. Would love to come back and spend more time cycling along the waters or eating convenience store food at their benches here when I'm back. If you're crazy about skincare and makeup, the shopping here can take up to three days of your itinerary. Pro tip is to carefully plan for food because there's just so many korean food that you need to try. On my next trip, would avoid Lotte World though and opt for Everland instead, just an hour ride outside of Seoul. It's less crowded and more value for money. Lotte World is crowded by 12pm so you spend more time in queues than on rides.

Seoul is a perfect place for shopping and food. They have lots of hidden gems such as cafes and restaurants around! Sometimes, you just got to look up and explore the upper floors for better food! If you haven't check out dongmyo, the vintage shopping is amazing! Seoul is also very advance in its transport system, so get a t-money card & get on your way with buses and trains!

Be prepared without Google navigation or use Naver or Kakao map instead. It's a great city. I've been there 4 times. Will still go back. Also a good travel base for going to everywhere else in Korea.

Popular places to stay in Seoul

Stay in some of the best accommodations Seoul has to offer

Other accommodations in Seoul

Pick from a wide variety of places to stay in Seoul

Other attractions and activities in Seoul

More things to do and see in Seoul