Find the perfect place to stay in Venice

Top things to do in Venice

Attractions, tours, and activities in Venice

Where to find art and culture in Venice

Find a great area to stay in Venice

Including tips for the best time to visit Venice

Venice has barely changed since its peak in the late 13th century, making it one of the world's most unique and well-preserved cities. Located in the Veneto region of northeastern Italy, Venice invites all to explore its network of charming canals and labyrinthine layout of narrow streets, offering a new discovery around every corner.

Surrounding the famous Piazza di San Marco at the city's center, you'll find the increible Basilica of St. Mark, the Doges' Palace (Palazzo Ducale), as well as the columns of San Marco and San Todaro.

Take a romantic gondola ride along the Grand Canal and under the Rialto Bridge, or a water taxi to Murano, world-renowned for its glassmaking. Venice also hosts the oldest film festival in the world, which takes place on the island of Lido di Venezia towards the end of summer. Other cultural highlights include the prestigious Art Biennale exhibition and the annual Carnival, when both locals and visitors hit the streets wearing traditional period costumes and elaborate Venetian masks.

Venice Marco Polo on the mainland area of Mestre is the closest airport to Venice itself, though many low-cost airlines touch down at Treviso Airport, 15 miles away from the city.

Points of interest in Venice

Stay near the top sightseeing spots in Venice

Inspiration and insider tips for things to do in Venice 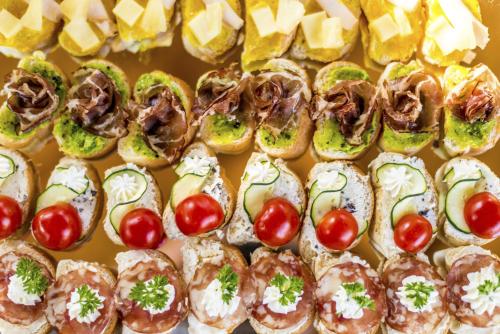 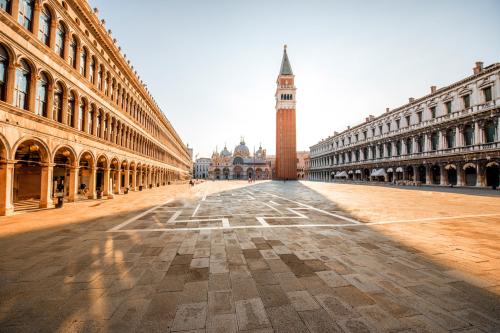 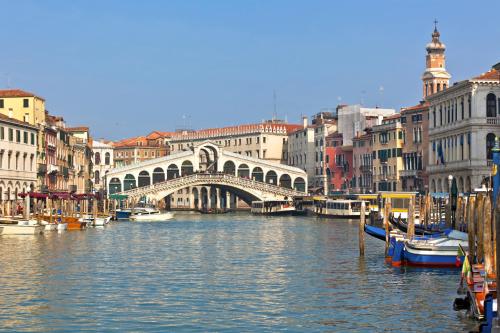 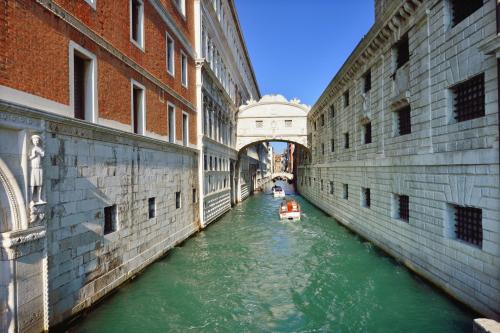 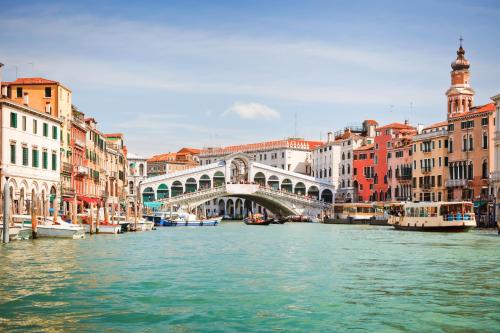 What other travelers say about Venice

Venice was so so crowded in the month of June. Its roads are narrow and quite inaccessible for those who don't understand the public transport system. However, the seafood here is to marvel at, and the gondoliers are amazingly friendly. It is somewhere definitely worth a visit, albeit probably a short one. Most things here are to be paid for however, like every church.

There is so much to do in and around Venice. Take the waterbus up or down the Grand Canal for amazing views, many churches have free entry, take a traghetto across the canal from St Mark’s to Santa Maria Della Salute for a very cheap gondola experience (about 2€), book online or in store to visit the T Fondaco viewing terrace (next to Rialto) for amazing views over the city, wander through St Mark’s Square when it is empty early morning or sit there in the afternoon and listen to the string quartets. We have visited many times and enjoy just wandering the city by foot and stopping off for cicetti (small snacks) during the day. Our favourite bar is the Paulander Cafe next to Rialto bridge, where you can enjoy a drink and snack at the water’s edge. There are also many restaurants away from the main attractions offering delicious food at reasonable prices. We get a one or two day ticket for the waterbuses so we can travel to Lido (lovely beaches) or to the islands of Murano (glass making) or Burano (colourful houses and lace making). Just wander the little alleys and bridges in different quarters and soak up the atmosphere!

Some people say that Venice is a city for two days. It is totally not correct. There are great museums, delicious food and lots of concerts in lots of beautiful churches. The only way to enjoy Venice is not to rush. You need to take it slow. Walk ,notice little things, breath it in. Even for those who don't go to museums, just walking there is a non stop pleasure.

Fantastic place with great Accomodation. Great value for money. Comfortable bed and breakfast. Close to central station. Boat trip 10 mins awesome experience. A lot of great Restaurent’s nearby and a lot of attraction within Walkable distance. Friendly staff serving breakfast and giving great tips of the tour for the day and include map. Will defiantly will come back next time

Venice offers such possibilities of discovery - art, Italian cuisine, architecture, monuments .... it is good to have more time for the trip to Venice, four days are not enough. The boat connection from the airport to Venice is excellent.

Beautiful city. Obviously expensive and very touristy in places. Great if you like to walk. There are no cars so good for kids too. Recommend the Da Vinci museum if you have kids as they can touch and play with the inventions. Very easy to get around. It is worth getting the 1,2 or 3 day passes for the vaporetto as you save money. Food and drink can be expensive but we didn't have a bad meal whilst there are there are budge options including in the museums. People were incredibly kind and patient with us and helped when we got lost. Recommend visiting.

Popular places to stay in Venice

Stay in some of the best accommodations Venice has to offer

Other accommodations in Venice

Pick from a wide variety of places to stay in Venice

Other attractions and activities in Venice

More things to do and see in Venice