Be a Booker. Search hotels and more in Essen

Hotels and More in Essen

All 208 hotels and more in Essen
Show map

This new hotel is in the pedestrian area in the heart of Essen, just over a quarter mile from Essen Main Station and Essen Cathedral. Motel One Essen features a 24-hour lounge and free Wi-Fi. Really good location, really nice staff, really welcoming place, room really clean and pretty big, the bathroom is incredible and the shower just awesome, also pretty nice breakfast, I stayed only one night but I would have stayed more and I will probably always look for a Motel One when I'm travelling. 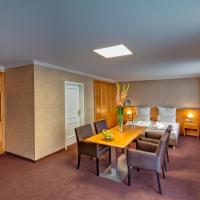 Newly opening in autumn 2018, this 4-star hotel is located in Essen and offers a fitness center as well as a 24-hour front desk. Free WiFi is featured throughout this accommodations. Rooms were great, hotel in general looks great, location is perfect as well 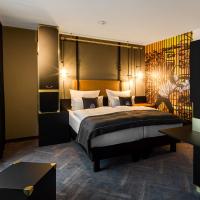 the niu Cobbles is located in Essen, just steps from the city garden, the Essen Philharmonic, the Alto-Theater, Folkwang museum and the Glückaufhaus. Beautiful Atmosphere. Clean and very Comfortable rooms 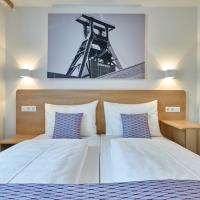 Located in Essen, a 19-minute walk from Colosseum Theater, McDreams Hotel Essen has express check-in and check-out and free WiFi throughout the property. Very modern hotel for the price we paid. 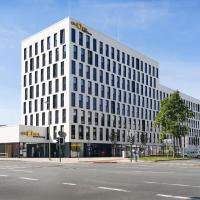 Located in the Westviertel district in Essen, 1640 feet from the Essen Central Station, GHOTEL hotel & living Essen features a restaurant and free WiFi throughout the property. Location, breakfast was amazing, cleanliness, fancy room, best value-for-money ratio I have ever seen in Germany. 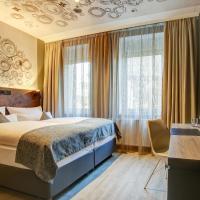 A 24-hour reception and free WiFi access are offered by this hotel. Centrally located in Essen, it is just 2953 feet from Essen Central Train Station. For the price it is a really good place. Clean and comfortable, great breakfast.

Just 984 feet from Essen Central Station, this family-run hotel offers traditional-style rooms with satellite TV, daily buffet breakfasts, and a 24-hour reception. Wi-Fi is free in the lobby. Everything, location, staff, breakfast was fantastic! Thank you a lot. 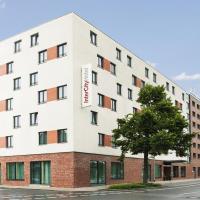 This 4-star hotel in the heart of Essen offers modern accommodations and easy access to highway A40, just a short walk from the main train station. Great staff with helpful recommendations. Good space for families. 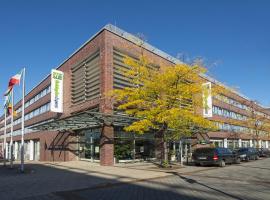 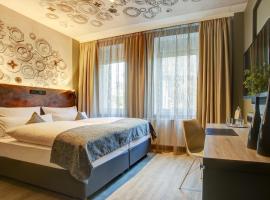 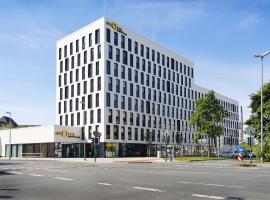 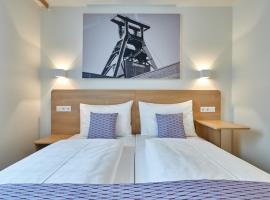 This 4-star hotel is next to Viehofer Platz Tram Stop in the center of Essen, 320 yards from Porscheplatz square. It has modern rooms and a stylish restaurant and bar. Perfect location. Clean room. Nice breakfast. 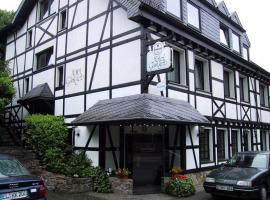 This family-run accommodations is located in Essen. Hotel Gastgeb features free Wi-Fi access is available. Rooms here at Hotel Gastgeb will provide you with a TV, a mini-bar and cable channels. They wait for us at "out hours" ! Midnight. Personal service. Very helpful. Thank you. 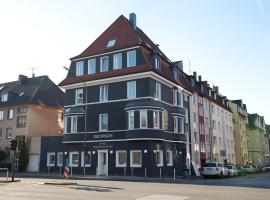 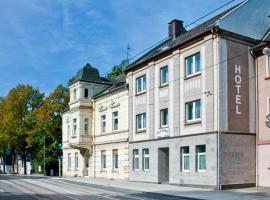 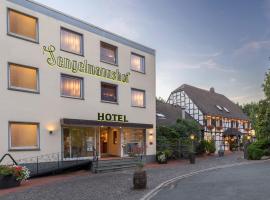 Located in Essen’s green Kettwig district, this charming hotel features a timber-framed exterior and a spacious beer garden. Guests enjoy local cuisine, free Wi-Fi and 2 bowling alleys. A great family-run hotel that did every thing well and will little fuss. 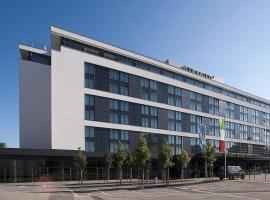 This 4-star superior hotel beside the Messe Essen exhibition center offers free Wi-Fi, modern wellness facilities, and great transport links. The suit is lovely. The view is perfect overlooking the Messen. The staff are lovely.

This family-run hotel in Hügel in Essen is on the shore of the lovely Baldeneysee lake in the industrial Ruhrgebiet's green belt. Varied buffet breakfasts are available in the mornings. Friendly staff, very nice location on lake 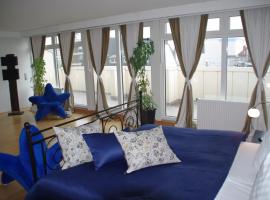 This 3-star hotel in Essen city center is just 1640 feet from Essen Train Station. It offers modern, themed rooms, underground parking and free Wi-Fi internet in all areas. Everything was good, from design to comfort, big space in the room, nice bathroom and quiet area.

This hotel is a 5 minute walk from the Limbecker Platz Shopping Center and 2 subway stops from Essen Central Station. It offers air-conditioned rooms and a 24-hour front desk. People are so helpful and do good 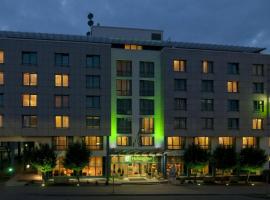 This 4-star hotel in central Essen features modern rooms with flat-screen TVs and free Sky satellite channels. It is just steps from the Colosseum and the Limbecker Platz square. Bed very comfortable and good breakfast selection. 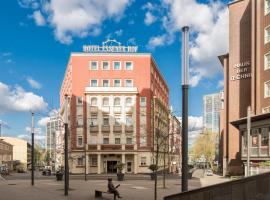 Ideally located beside the pedestrian zone and main railway station in Essen, this traditional 4-star hotel is a direct underground ride from the exhibition grounds and the Grugapark complex. It was astonishingly peaceful given the central location a stone’s throw from the central railway... 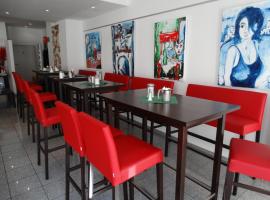 This modern hotel is in the southern district of Essen and just 1.2 mi from the center. Opened in 2013, Webers - Das Hotel im Ruhrturm offers free wireless internet and a 24-hour reception. The location was good. Close to downtown and other areas of the city that we visited. 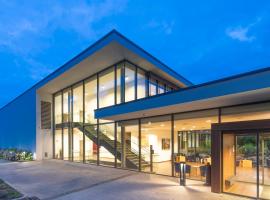 In the Huttrop district, this modern hotel is conveniently located just 3 miles from Essen Exhibition Centre. It was a pleasure to stay here as we drove from the UK to Prague. 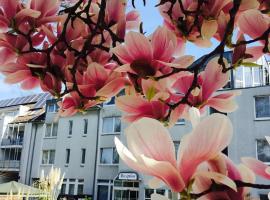 Located in the Altenessen district of Essen, this 3-Star Superior hotel is a 5-minute walk from Karlsplatz Underground Station. Clean, practical room with plenty of light and space, excellent breakfast buffet with many delicious...

This small family-run hotel is beautifully located between the Werden and Kettwig districts of Essen, 4.3 mi from Lake Baldeneysee and 5 mi from the Folkwang Museum. Hotel Rutherbach offers free WiFi.... Big space, modern equipment, godd for family with kids, hitel owners are very nice and friendly 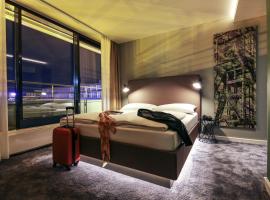 Featuring a pool and a sauna, this 4-star hotel is located directly south of Essen city center. It is 1 underground station from Essen Main Station and 3 stops from the Gruga-Halle exhibition center. the staff, the room and the breakfast (with multiple options without gluten!) 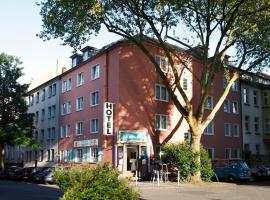 This 3-star, family-run hotel lies in the tranquil Rüttenscheid district of Essen, and is centrally located within easy reach of the Essen convention center, main train station and Düsseldorf Airport.... Staff was very helpful breakfast was excellent a little lunch for your travels.

This 3-star superior hotel is centrally located in Essen's Rüttenscheid district. The staff was friendly and efficient. 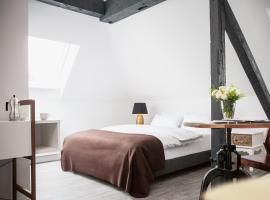 Featuring a bar and views of garden, The Rubens Hotel is located in Essen, 1.3 miles from Philharmonic House Essen. Interior design, quality of service, and an overall sense of professionalism. 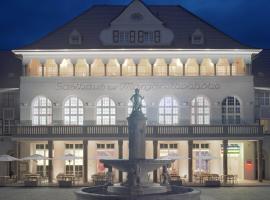 Hotel friends Essen Zeche Zollverein has a restaurant, bar, a shared lounge and garden in Essen. 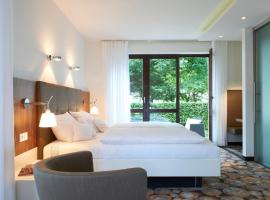 This 4-star hotel offers modern accommodations, spa facilities and free parking in Burgaltendorf. It lies a short walk from the old castle ruins and 6.8 mi from Essen city center. Perfect room for all our needs

FAQs about hotels in Essen

One of Europe's Culture Capitals

Once a city of steel and coal mining, Essen is now one of the cultural capitals of Europe, and one of Germany’s greenest cities. It's home to many historical landmarks like the Cathedral of Essen and Nikolauskirche, along with the charismatic half-timbered medieval quarters of Kettwig.

The botanical garden of Grugapark has a host of plants and flora, while Essen’s historical past is displayed through landmarks like Basilica St Ludgerus, Alte Kirche and the Old Synagogue Essen.

In summer you can swim, windsurf, take a boat ride or enjoy a picnic on the banks of Lake Baldeney and the Baldeneysee Seaside Beach. Essen has ice-skating rinks in some areas during winter. Movie Park Germany is also a popular attraction.