Be a Booker. Search hotels and more in Nantes

All 199 hotels and more in Nantes
Show map

This Campanile hotel is a 3-minute drive or 10 minutes in public transport from the city center of Nantes. It offers modern guest rooms, a restaurant and a 24-hour lounge bar. If I must object something, just the prize of beers. 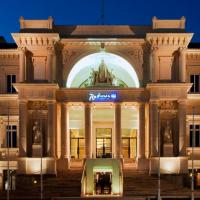 Radisson BLU Hotel, Nantes is located in the city center and just 0.8 mi from the Loire River. It features a 24-hour room service. The rooms are uniquely designed with furniture by Jean-Philippe Nuel.... It was a great experience and we really enjoyed the hotel Great setting and excellent staff 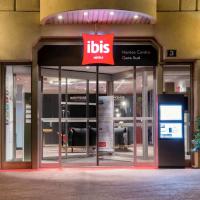 Located in front of Château des Ducs de Bretagne, in the city center, ibis Nantes Center Gare Sud is a 24-hour reception hotel with an International restaurant, a bar and a terrace. Location is very good, next to railway station within 300 meters. Walking distance to the Chateau of Duck of Normandy. Room was clean. Breakfast was good. 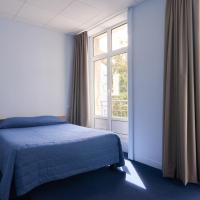 Located in Nantes city center, Hotel Le Petit Duquesne offers rooms with free Wi-Fi. It is next to the Tramway, and a 5-minute walk from the airport shuttle and Nantes Main Bus Station. I spent 8 years in Nantes before coming back as a tourist. This hotel has an excellent location and relatively affordable price compared to the average of accommodations in this area. Surprisingly the rooms were rather new( completely renovated recently). My window was down the Main Street, but surprisingly I didn’t find it that noisy( I spent a night with an open window). Excellent location to visit Nantes by foot or with main transportations. Great value for money. Highly recommend! 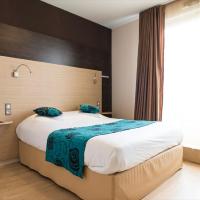 Hotel Belfort is in the heart of Nantes, next to the Cité de Congrés and less than half a mile from the train station. It provides modern accommodations with free Wi-Fi access. Instead of dirty room has been given upgrade more expensive free of charge.

Located in the city center opposite the SNCF train station, ibis Styles Nantes Center Gare is 1312 feet from the Château des Ducs de Bretagne and the Botanic Gardens. The staff is very friendly and the rooms are a good size and clean. The breakfast is good. 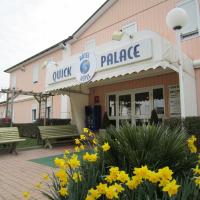 This low-cost hotel is located in Nantes near the Parc des Expositions and la Beaujoire Stadium. It offers cozy accommodations, and free Wi-Fi internet access. Very sympathetic staff. I felt very comfortable and like a second home ! 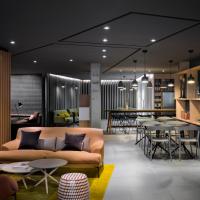 Located in Nantes city center, just 2953 feet from the train station and the Exhibition Center, Okko Hotels Nantes Château features a 24-hour reception desk and free Wi-Fi. Excellent location with many of the sights within walking distance. Staff were friendly and welcoming. The ability to get a coffee etc in the club was very welcome as was the aperitivo etc in the evening. Rooms were incredibly quiet, I did not hear anything once the door was closed. I appreciated their commitment to environmental issues and not have additional products around. Would visit again. 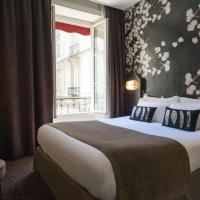 Hotel The Originals Nantes Voltaire Opéra (ex Qualys-Hotel) is located in central Nantes, 164 feet from the Théâtre Graslin and a 10-minute walk from Machines de l'île. The location of the hotel is very good, we could get everywhere in the city by walking. There is also good transport near the hotel. The hotel is very clean and well designed. The stay at the hotel was lovely and comfortable. The breakfast at the hotel was very tasty and included some home made yums! 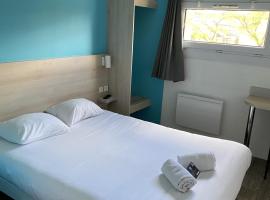 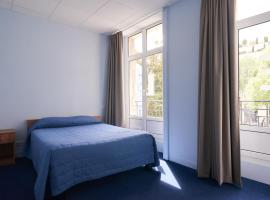 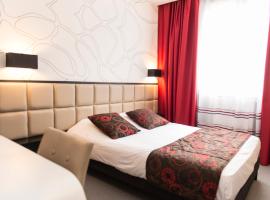 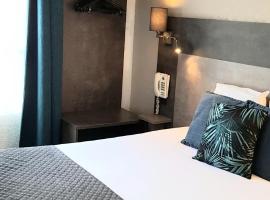 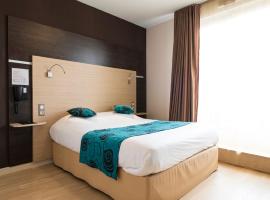 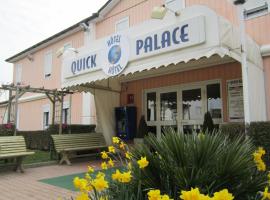 The 4-star Mercure Nantes Grand Hotel Centre is in central Nantes, right next to the Pommeraye Passage and a 10-minute walk from the Château des Ducs de Bretagne. We are traveling on bikes 🏍 around France for 16 days, this was the best stay by far, value for... 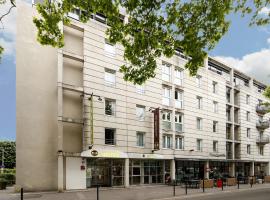 B&B Hôtel NANTES Center offers accommodations in Nantes, a 15-minute walk from the Castle of the Dukes of Brittany and Bouffay area. Great location. We landed late and the security guard was really nice letting us in. 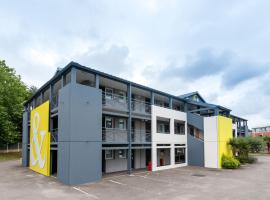 B&B Hôtel NANTES Parc Expos La Beaujoire is located in Nantes, 2.7 mi from Botanical Garden of Nantes. Each room comes with a flat-screen TV with cable channels. The breakfast was fantastic, good quality and generous. The room was very clean and comfortable.

Hotelf1 Nantes Est Porte De Saint Luce is located in Sainte-Luce-sur-Loire, 3.1 mi from Nantes. The rooms include a flat-screen TV. All rooms are equipped with a shared bathroom. Price and car parking , wifi free, breakfast was ok. Quiet location 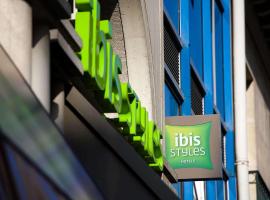 Hotel Des 3 Marchands is located in the heart of Nantes, between the cathedral and the Graslin Theater, half a mile from the train station. I loved the location, the staff, the amenities. The breakfast spread wasn’t bad. 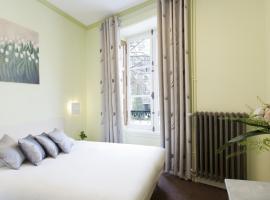 This 2-star hotel is located in Nantes city center, 328 feet from the Tour Bretagne. It is committed to sustainable development and has been recognized by E.U. Ecolabel & Green Key. The room was great, it had a fully functional kitchen with a coffee maker - though the capsules are... 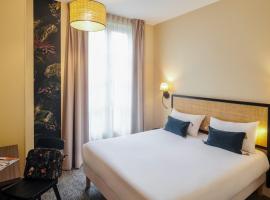 Located in the historical center of Nantes, Ibis Styles Nantes Center Place Graslin is only 984 feet from the Graslin Theater. Staff was great. Room was perfect for 2 couples. Lots to see and eat nearby.

Located a 10-minute drive from Nantes city center, this ibis offers air-conditioned rooms and a restaurant and bar. The Beaujoire Stadium and park are located 2625 feet from the hotel. Location - easy access to routes to all detinations. large parking area. Comfortable and clean... 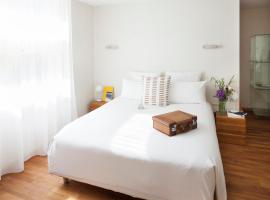 La Perouse is a design hotel located in the heart of Nantes, 1640 feet from Nantes Cathedral. It has the European Union’s Eco-label accreditation and offers free WiFi internet access. Clair at the front desk was so helpful. 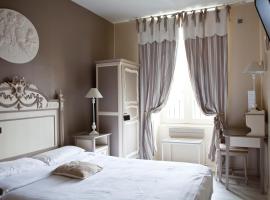 Abat Jor is located in the historic center of Nantes and offers modern rooms with free Wi-Fi. It is a 7-minute walk from the Nantes Train Station and 2297 feet from Château des Ducs de Bretagne. There is nothing to complain about... ;-)...

Located in Nantes city center, Best Western Hotel Graslin is just a 2-minute walk from the Graslin Theater. It offers soundproofed rooms with flat-screen TVs and free Wi-Fi access. The location and friendly and efficient staff. 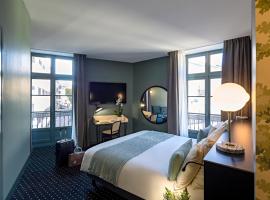 Located in Nantes city center, in the heart of the Graslin district and pedestrian zone, this hotel is near Passage Pummeraye and a 5-minute walk from Place du Commerce. Wonderful location. Very helpful and friendly staff. Comfortable air-conditioned room

Located in the heart of Nantes, L’Hotel is within walking distance of the SNCF train station and the city’s cathedral. It provides contemporary accommodations with free Wi-Fi internet access. Breakfast is good,and good enough.

The Coeur De Loire is located in Nantes, 1.1 mi from the Chateau Des Ducs De Bretagne. It offers a buffet breakfast, served on the outdoor terrace, overlooking the garden. The service given needing extra support in the bathroom and being able to arrive around midnight! 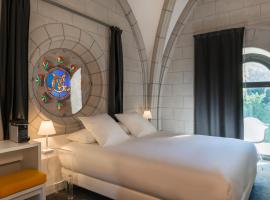 Set in a 19th-century chapel with stained-glass windows, this boutique hotel has a 24/7 reception and is located opposite the Botanic Garden in the center of Nantes. Staff fantastic, little amenities unexpected and very welcome. 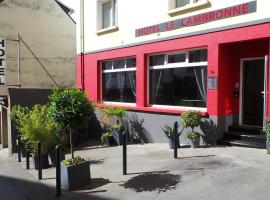 The Hôtel Le Cambronne is located in Nantes, just 459 feet from Place Graslin and 1148 feet from the banks of the Loire. It offers en-suite guestrooms with LCD TV and free Wi-Fi access. The location was perfect. Very close to a lot of shops and food. Staff was very friendly.

The eco-friendly Hotel de la Regate is located on the edge of the River Erdre, with views of the Château de la Gascherie. It offers a hot tub and free Wi-Fi. Located in a quiet, very pleasant, pastoral town. The hotel is cozy, small, very quiet and clean. 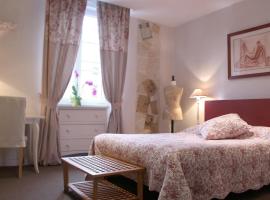 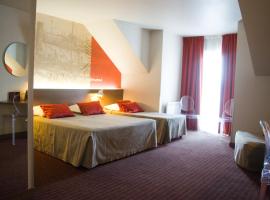 This hotel is located in the city center, 312 feet from the Theater Graslin, and offers free Wi-Fi access. It has been awarded the international Green Key eco-label. Excellent location. Great value for money.

Located in Nantes city center, Hotel Le Petit Duquesne offers rooms with free Wi-Fi. It is next to the Tramway, and a 5-minute walk from the airport shuttle and Nantes Main Bus Station. I spent 8 years in Nantes before coming back as a tourist.

Hotel Saint-Patrick is located in a pedestrian area in the center of Nantes. It is a 6-minute drive from the Nantes Train Station and 328 feet from the Commerce tram station (lines 2 and 3). Very helpful staff, clean, excellent location in the city center.

FAQs about hotels in Nantes

Gateway to the Loire Valley

Easygoing and green, Nantes is the gateway to the Loire Valley. On a delta between the Loire, Erdre and Sèvre rivers, this once important port is now an innovation pioneer.

A former shipyard, the Île de Nantes in the Loire now has bars, clubs and restaurants. However, its most intriguing feature is the Machines of the Isle of Nantes, a collection of weird and wonderful mechanical sculptures – you can even take a ride on the elephant.

Across the river is the moat-surrounded Chateau des Ducs de Bretagne, a fortified castle and former home of Breton Dukes. A few streets away is Nantes Cathedral, whose façade is reminiscent of the one in Reims. Place du Bouffay in the historic city center is home to many restaurants and bars, while the 19th-century shopping center Passage Pommeraye has a range of stores over 3 levels. For a taste of daily life head to Talensac market.

Other Nantes attractions are the Japanese Garden at Île de Versailles in the Erdre, the former shipowners’ houses at Île Feydeau, and the Jules Verne Museum, celebrating the city’s most famous son.

Don’t head to Nantes Airport from your Booking.com hotel, apartment or B&B without having tried the local speciality – crêpes. Delicieux!