Search hotels and more in Bergen

Hotels and more in Bergen

All 163 hotels and more in Bergen
Show map

Situated 500 metres from the Bergen Airport, this hotel offers a free airport shuttle bus, as well as free WiFi, a 24-hour front desk and lobby shop. Central Bergen is 17 km away. Excellent Breakfast, the best in Norway.

Hotel Norge by Scandic is located in central Bergen, just next to Byparken city park. Guests will find 3 floors of bars, lounge areas and restaurants. Best location in Bergen-in the middle of everything. Breakfast is on of the best we ever had-soo much great food, huge selection. Staff is super cute and helpful. Terrace is very nice, you can sit outside even in the rain. 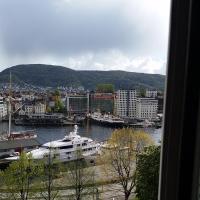 Located by the UNESCO-listed Bryggen Wharf District, this hotel offers accommodation in central Bergen. The famous Fish Market and the Fløibanen funicular railway are both 10 minutes’ walk away. Bed excellent, extremely comfortable. 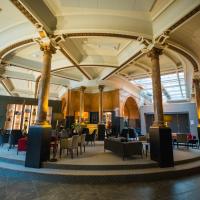 Housed in a historic building from 1876, Opus XVI, an Edvard Grieg Heritage Hotel, is a luxury hotel located in central Bergen featuring individually designed rooms and suites. Everything. Loved the hotel. Felt very welcome and comfortable. 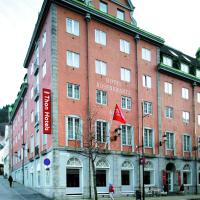 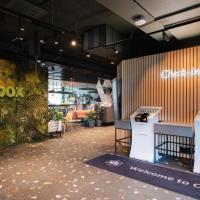 This budget design hotel is located in Danmarksplass in Bergen, and offers free WiFi, a 24-hour front desk, and a restaurant. Very kind and helpful staff, delicious breakfast.. Just a great hotel! 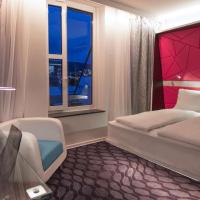 Located inside Xhibition Shopping Center, this hotel offers accomodation in Central Bergen. The UNESCO-listed Bryggen Wharf, Bergen University and Bergen Central Station are all within 750 metres. Great reception staff many thanks Louay for making my stay much more easier .very clean very comfy and near all Bergen attractions 👌 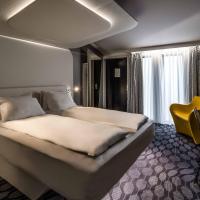 Conveniently located 400 metres from Bergen’s UNESCO-listed Bryggen Wharf, this designer hotel offers an on-site restaurant and bar. Free WiFi is offered throughout the property. Very centrally located, a 10 minute walk from the train station and about 3 minutes to the waterfront and ferries. 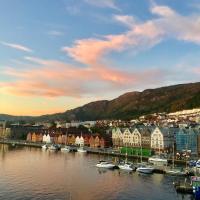 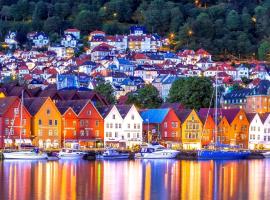 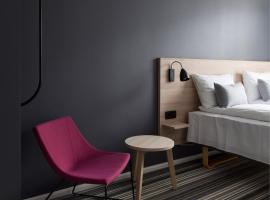 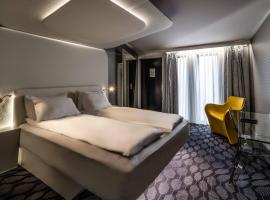 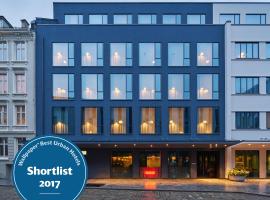 Offering a sky bar overlooking the mountains and Bergen, this Scandic hotel is located next to Bergen Train Station. Really near to train station. Easy to find.

Situated in central Bergen, a 5-minute walk from the Fish Market, Augustin Hotel offers rooms with free Wi-Fi. The hotel features original paintings and sculptures by Norwegian artists. The staff were kind and helpful. The rooms were clean and comfortable. The breakfast was very good!

Scandic Byparken is housed in the historic Tornøgården brick building in the heart of Bergen. It offers a 24-hour reception and tastefully decorated rooms with LCD TVs and free WiFi. Breafast was lovely. Wish I had 6 stomacks, not room to taste it all!

Situated by the UNESCO World Heritage Site of Bryggen Wharf, 300 metres from the fish market, is Radisson Blu Royal Hotel, Bergen. This modernised hotel offers air conditioned rooms with free Wi-Fi. Great location that is close to everything but the rooms were very quiet with VERY comfortable... 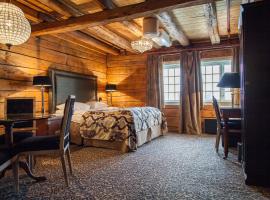 Located in a 16th century building the heart of Bergen, next door to the Hanseatic Museum, is Det Hanseatiske Hotel. It offers unique rustic-style rooms decorated in dark, velvety colours and... The room was beautiful and the breakfast delicious, they had a good selection of everything.

This central hotel is in Bryggen, Bergen’s old Hanseatic harbour area. It is about 1 km from the train and bus stations and offers free WiFi, gym and sauna access. The rooms look better than the pictures! Visit the bar for some great cocktails! 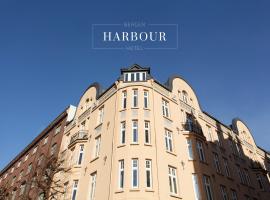 Bergen Harbour Hotel is centrally located in Bergen, 1 km from Bergen University. Guests can enjoy the on-site bar. Rooms are fitted with a flat-screen TV. Location. People at the reception are very friendly 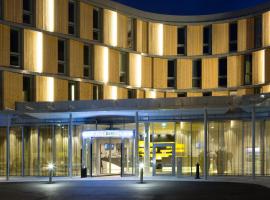 Located just a 2-minute walk from Bergen, Flesland Airport, this hotel is 17 km from Bergen University. The town centre is 18 km away. Guests can enjoy the on-site bar. First time I’ve ever seen a self check in computer desk and I loved it! 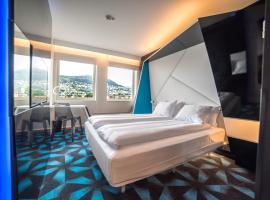 This contemporary design hotel is located at Danmarksplass Square in central Bergen. Guests can enjoy the rooftop terrace with views of the city and surrounding mountains. Great hotel slightly out of the city center in a quiet area, near the light rail and some hiking... 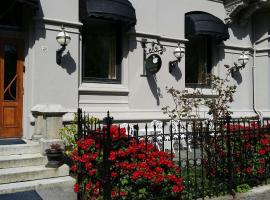 This self-service budget hotel is 3 minutes’ walk from Bergen’s famous Fish Market and the 14th-century Bryggen district. All rooms have a kettle, a TV with DVD player and free WiFi. It was perfect location and very clean..

This Best Western Plus hotel is located in the heart of Bergen, an 8-minute walk from Bryggen Wharf. Rooms with seating areas, cable TV and free internet access are offered. This place was great. Especially breakfast was amazing with huge variety of local food to chose. 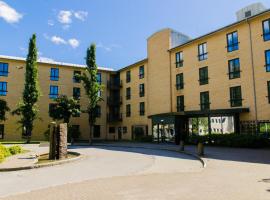 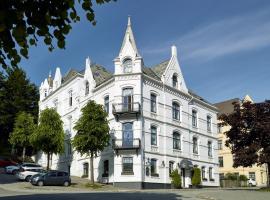 This charming, family-owned hotel is set in a late 19th-century building by Bergen’s Nygårdsparken. It offers personal service and an interesting antique collection. WiFi is free. Lovely old hotel in a very nice part of Bergen. 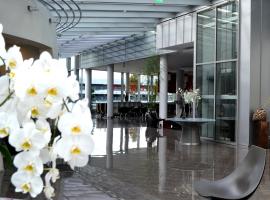 This design hotel is directly connected to Bergen Airport. It offers free Wi-Fi and soundproofed rooms with flat-screen TVs. The hotel has a top-floor relax area with a gym. This is the perfect hotel for a next day flight. 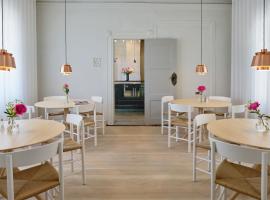 Set in Bergen, within 1.5 km of Bergen University and 1.5 km of University Museum of Bergen, Hotel Villa Terminus offers free WiFi throughout the property. Loved the property . Villa is so cute and the interiors are done with relaxing hues . 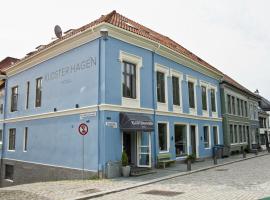 Set on the same grounds as the Michael Monastery in the Nordnes area of Bergen, Klosterhagen Hotel offers free WiFi and rooms with tea and coffee facilities. Bergen Aquarium is a 10-minute walk away. Everything was excellent!the location,the rooms,breakfast,all the staff. 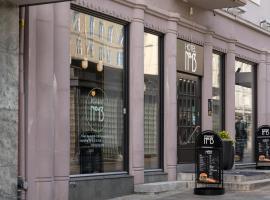 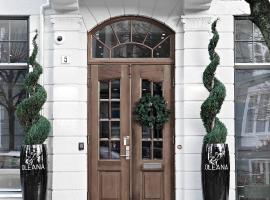 Located only 800 metres from Bergen train station, Hotel Oleana is located in Central Bergen. This classic building is refurbished with modern and elegant design. Excellent breakfast, clean room, a bed you can sink into -- but with lots of support for the back.

Overlooking Vågen Fjord and Mount Fløyen, Scandic Torget Bergen is only 200 metres from the picturesque Bryggen wharf area in central Bergen. It offers free WiFi and a 24-hour lobby shop. The staff was outstanding in helping us secure a car rental in Sogndal where no facilities were open... 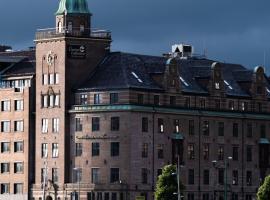 This fashionable hotel is housed in a Neoclassical 1920s stone building, in the historic Bryggen area of Bergen. It offers a free evening meal and harbour views from the rooftop. Super helpful staff, great location, lovely decor

FAQs about hotels in Bergen

Gateway to the western fjords, Bergen is a picture-perfect postcard of Norway at its best. Colourful, wooden houses in UNESCO World Heritage-listed Bryggen contrast wonderfully with the lush greenery of the surrounding Seven Mountains.

For fantastic views of Norway’s 2nd largest city, hop on the cable car to Ulriken Mountain. Alternatively, hike or take the funicular railway up to Fløyen Mountain. With beaches sheltered from the North Sea by islands, Bergen is Norway’s busiest port and a popular starting point for fjord cruises and deep sea fishing.

The fish market in the narrow streets of the historic centre is a popular attraction, while just north is 12th-century St Mary’s Church. Around 100 years younger is Bergenhus, one of Norway’s best-preserved forts. Further north is Gamle Bergen, a reconstructed wooden village offering insight into the past.

Cobbled Strandgaten street and Lagunen Storsenter shopping centre are just some shopping options, but items aren’t cheap. As you wander around the city look for work by Dolk, Norway’s best-known street artist. Other cultural offerings are the many museums and a good music scene ranging from classic to indie.

Booking.com’s range of Bergen accommodation extends out towards Bergen Airport in Flesland, the departure point for many workers on the offshore oil and gas rigs.