Search hotels and more in Ljubljana

Hotels and more in Ljubljana

All 779 hotels and more in Ljubljana
Show map

Opened in September 2017, the InterContintenal Ljubljana is a 5-star property located in the centre of Ljubljana. The property is awesome! Rates in winter months are especially acceptable. Everything you need, the hotel has. Forgot my toothpaste, they provided a complimentary kit. Gym is sufficiently large for a quick morning workout, opens at 6:30 AM, perfect time before meetings.

Urban Hotel is set in Ljubljana, 500 metres from the Tromostovje Bridge and Ljubljana Old Town. Guests can enjoy the on-site bar. There is a 24-hour front desk at the property and free WiFi available.... Location, Staff, Breakfast, Room are better than perfect.

Located in Ljubljana, 350 metres from Prešern Square, Triple Bridge and the Old Town, Art Hotel boasts air-conditioned rooms with free WiFi throughout the property. The staff were super friendly and super helpful and offered a personal touch. I loved the location and the hotel itself had interesting displays of art in its cafe. I also liked the life the hotel promoted with small gigs outside at the entrance. I would only stay there on any visit to Ljubljana. 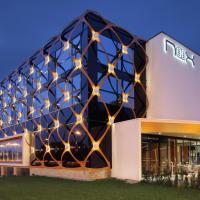 Located in the Šentvid area of Ljubljana, Hotel Nox offers air-conditioned rooms with large windows and city views. Free Wi-Fi and free private parking are provided. Fantastic property with attention to detail everywhere. We were really impressed.. front desk staff, especially Nick, were extremely helpful and nothing was too much to ask. Highly recommend staying here. Little out of the centre but easy to get to the centre by car. We loved the racey raunchy Nightlife room that we got to stay in. We have great memories of. Lovely stay and enjoyed a comprehensive breakfast as well. 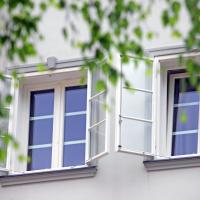 Offering bright rooms, an on-site bar, bike rental and free Wi-Fi, Adora Hotel is a family-run boutique hotel set in Ljubljana’s Old Town, just beneath Ljubljana Castle and only steps away from the... Excellent location, comfortable and clean room.

Featuring a lounge bar with terrace, the Ahotel is 2 km from the centre of Ljubljana. It offers free private parking and air-conditioned rooms with free Wi-Fi. Very clean and comfortable rooms. The staff was very accommodating. They even made snack bags for us for when we left for our early morning flights. 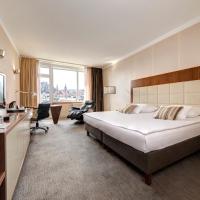 Conveniently located in the centre of Ljubljana, just 160 metres away from the central Prešern Square and Tromostovje, uHOTEL offers modernly-furnished accommodation in Ljubljana. Nice hotel with an excellent restaurant. 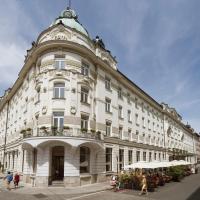 Located just steps away from the central Prešern Square and Tromostovje in Ljubljana, Grand Hotel Union offers accommodation in a historical Art Nouveau building. I stayed 1 night in Winter with my Girlfriend. I reccomend the hotel for the beautiful rooms, for the wellness area and also for the position, in the heart of the city.

Located in the heart of Ljubljana, just 300 metres from the central Prešeren Square, City Hotel Ljubljana offers an à la carte restaurant and a lobby bar. Spacious room!!! So great with a little one year old running around. Perfect walking distance to ALL the things. And nicest staff!

Providing free WiFi, Hotel Vila Katrca is situated in Ljubljana. This property is set a short distance from attractions such as Kolezija Swimming Pool Complex. Great communication - we arrived late and we had all details - code for the gate location of the room key - provided in advance. Also - the hotel offers very good breakfast with plenty of choices. 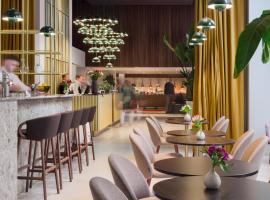 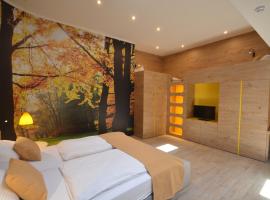 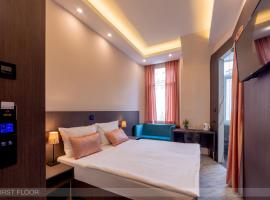 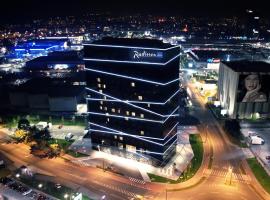 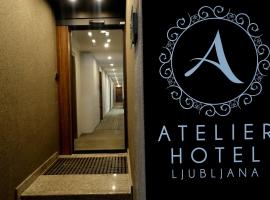 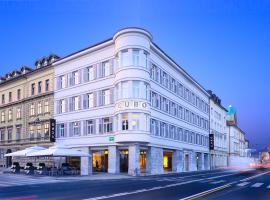 Hotel Cubo is located in the centre of Ljubljana. It offers modern, air-conditioned rooms with free access to Wi-Fi and a flat-screen cable TV and a fine restaurant. Amazing & Friendly staff, very hospitable 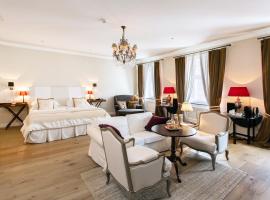 An 11-minute walk from Ljubljana Castle, Atelier Hotel is set in Ljubljana and features air-conditioned rooms with free WiFi. I liked so much the service and the new design of the hotel and the room specifically.

Featuring a spa and wellness centre and on-site restaurants, Austria Trend Hotel Ljubljana offers elegantly furnished spacious rooms in Ljubljana, just 500 metres from the Ljubljana-Bežigrad highway... Wellness and Spa one of the best in Slovenia. Big room with nice view. 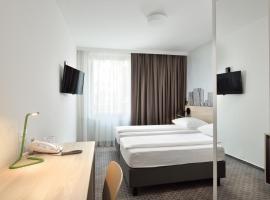 Situated in a historically protected building and partially refurbished in 2017, B&B Hotel Ljubljana Park is within short walking distance from Ljubljana's city centre and major tourist attractions. It was near our destination for an departure from the train station as well as near the center of...

Enjoying a picturesque hilltop setting and surrounded by nature, Four Points by Sheraton Ljubljana Mons offers a sauna and a gym, a bar, as well as an à la carte restaurant. This hotel is an easy exit/entrance from the highway, and was perfect for an overnight stay.

Located in the centre of Ljubljana, 400 metres from Tivoli Park and 700 metres from Prešern Square and Tromostovje, Hotel Lev offers tastefully furnished rooms and a bistro bar in the lobby. The breakfast is amazing! Very nice staff and new, comfy rooms!

Set in Ljubljana, within 5 km of Ljubljana Castle and 2.5 km of Kolezija Swimming Pool Complex, Vault Hotel offers accommodation with a garden and free WiFi throughout the property as well as free... The hostess Annia was very mind, helpful and smile all the time. 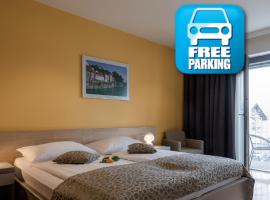 B&B Cirman is located in Medno, 10 km from the centre of Ljubljana. It offers rooms with free WiFi access. Free on-site parking is provided. Extremely friendly staff. Even though we arrived late in Slovenia, the receptionist took his time... 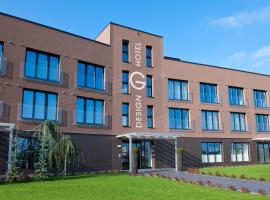 Featuring a business centre with meeting facilities and a restaurant serving traditional and international specialities, the stylish G Design Hotel offers elegant rooms with free Wi-Fi in the quiet... This hotel was very nice surprise for me, big gift after 12 hours spent on the high way, Very easy... 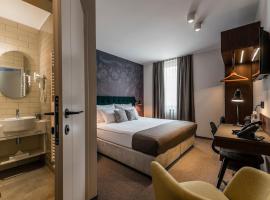 Located in the centre of Ljubljana, just 350 metres from the Ljubljanica River, Hotel Mrak is a pet-friendly family-owned hotel set in a historic building. Free WiFi is provided in all areas. It is located very close to the main attractions and river area. 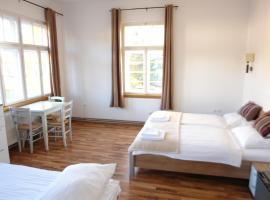 Hotel Katrca is a family run hotel, located just 1.8 km from Ljubljana's city centre. Set in a quiet residential area, it is close to Tivoli Park, Rožnik Hill and the Zoo. The place has soul and history, highly recommended! 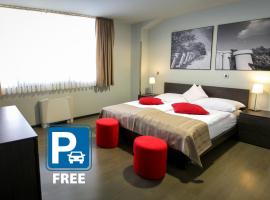 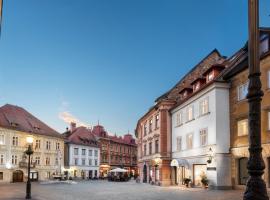 Located in Ljubljana, WUD hotel features a terrace and a shared lounge. The property is situated 3.9 km from Ljubljana Castle. rooms and facilities were nice. superb gym, very nice and friendly staff.

Housed in a historic 19th-century building, Hotel Center Ljubljana is located in the very centre of Ljubljana and offers rooms featuring a flat-screen TV and free Wi-Fi. Modern hotel, centrally located and easy to find. The personal is helpful. Located 500 metres from Prešern Square and 550 metres from Ljubljana Triple Bridge, Central Hotel features The Rooftop@Central Bar with a co-working space. Free WiFi is provided in all areas. Hotel is very clean, new and modern. Breakfast was excellent with a variety of options. 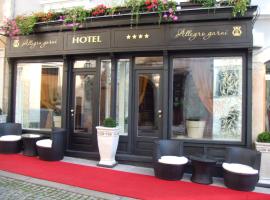 Set in a historic building in the centre of Ljubljana, Allegro Hotel is close to many sights. It offers luxurious rooms with elegant furnishings and free Wi-Fi. The lady at the desk was great. Ensured we had breakfast for a very early check-out. 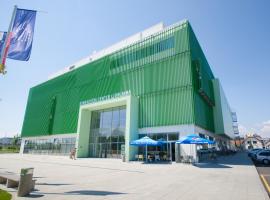 FAQs about hotels in Ljubljana

A Capital City with a Small Town Charm

The charming Slovenian capital, Ljubljana is the only large city in the country. Dominated by the Castle Hill with Medieval Ljubljana Castle on top, the city is a picturesque Balkan mix of architectural styles, romantic bridges and scenic views.

Due to two major earthquakes in 1511 and 1895, which destroyed many buildings, the Old Town features a range of styles: from Roman period, through Medieval Baroque to Vienna Secession. This trend exists throughout the city with many Gothic-style buildings featuring elements from different periods added later on.

Strolling along the Ljubljanica River you will see the Triple Bridge, connecting two parts of the centre and beautifully lit in the evenings. Make a stop at the Prešelen Square, Ljubljana’s most popular meeting point with Franciscan Church of Annunciation and one of the main shopping streets, Čop Street.

With over 10,000 cultural events a year and still preserving the charm of a smaller town, Ljubljana is a city where one can truly relax: on a bench in the Tivoli Park, in one of the bars of the Town Square or on a funicular going to the top of the Castle Hill.

Whether you’re looking for cheap or luxury hotels, near the city centre or the Brnik Airport, Booking.com has plenty of properties for your Ljubljana holiday!