Be a Booker. Search hotels and more in Philadelphia

Hotels and More in Philadelphia

All 337 hotels and more in Philadelphia
Show map 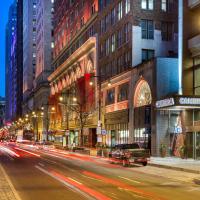 Cambria Hotel Philadelphia Downtown Center City is set in the Rittenhouse Row district of Philadelphia, and is 2625 feet from Pennsylvania Convention Center. The staff was really nice and the place is amazing

This hotel located in Downtown Historic Philadelphia features an on-site restaurant with city views, a fitness center and a full service spa. The Philadelphia Convention Center is 1056 feet away. Convenient to my class at the Studio Incamminati but in an area walkable to center city shopping . 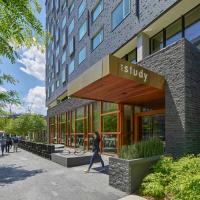 The Study Hotel at University City offers sophisticated and refined accommodations in Philadelphia. Guests can enjoy the on-site restaurant. great location for college tours with my daughter; near public transport, cool restaurants and even haircuts. Starbucks around the corner and great free coffee each morning 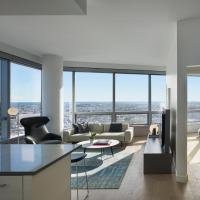 Housed in a modern high-rise building, the apartments at AKA University City is partly residential with a front desk and onsite amenities that include a lounge, a restaurant, a fitness center and an... Location was great, close to the university & the shopping area, Very clean with a fantastic view from the suite. Kamila at the reception desk was awesome

Offering a restaurant and a state-of-the-art fitness center, Courtyard by Marriott Philadelphia South at The Navy Yard is located in Philadelphia, near all the main stadiums. Great rooms, staff, food area, beds, bathroom. 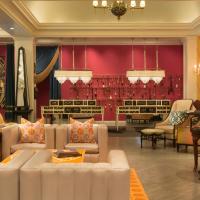 Located in Center City Philadelphia, 285 feet from Independence Hall, Kimpton Hotel Monaco Philadelphia features a rooftop lounge overlooking the Liberty Bell. Free WiFi access is offered. All staff extremely caring and welcoming! Room is very comfy, and decoration is so beautiful... We loved everything about the hotel and its location! 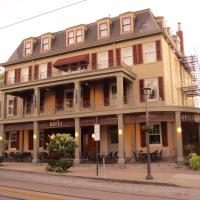 This hotel is 11 mi from downtown Philadelphia and is 19 mi from the Philadelphia International Airport. The hotel offers 3 restaurants and rooms with free WiFi. Michelle checked me in early and set the tone for a perfect stay. I wish every hotel experience could be as flawless as The Chestnut Hill Hotel.

The Notary Hotel Autograph Collection is a historic hotel located 1312 feet from the Pennsylvania Convention Center and less than 0.6 mi away from Independence Hall. We liked everything ! Our stay was so amazing that we stayed longer. Many thanks to the staff (especially the girl at the breakfast) for everything ;) 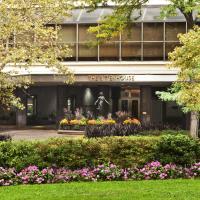 Within walking distance of major museums, world-class shopping and the business district, this prestigious hotel in Philadelphia city center, on Rittenhouse Square, offers a fitness center with cardio... Service was extremely good ! Enjoyed our breakfast with the view of the garden ! 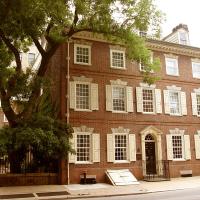 This national historic landmark, renovated into a luxury boutique hotel, offers cozy accommodations and 18th century charm. Morris House is a beautiful hotel in a historical building. There is a cosy sitting room and library, plus there were gorgeous Christmas decorations up for the holiday season. The staff were very helpful and friendly, the room was well stocked and the bed was comfortable. One thing to bear in mind is that there is no elevator. The location of the hotel is fantastic, easy walking distance to most of the main sights. Overall a lovely place to stay! 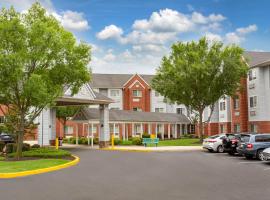 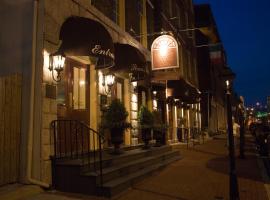 Featuring an on-site wine cellar, a sit-down restaurant and a fitness center, the Penn's View Hotel is in Philadelphia, a quarter mile from Liberty Bell, Independence Hall and Independence Park. Everything else was very good...clean comfy room,staff and also bfast with Gf cereal Well done Offering a fitness center, Sleep Inn Center City is located in Philadelphia. Free WiFi access is available. Each room here will provide you with air conditioning and cable channels. Very friendly and helpful staff. Arthur is the best Located in Philadelphia city center, this hotel is directly across from the Philadelphia Convention Center and features an indoor salt water pool. The National Constitution Center is 3169 feet away. good location clean and tidy big space good breakfast

Featuring an on-site restaurant and an indoor, saltwater pool, this Philadelphia hotel is just 1.5 miles from the Northeast Philadelphia Airport. Free Wi-Fi access is available throughout the... I loved the bathroom mirror it was so dope.

In the Penn's Landing waterfront area of central Philadelphia, this hotel features free Wi-Fi access and a daily breakfast, served every morning. Excellent location. Breakfast awesome. Complimentary coffee throughout the day was superb. The Homewood Suites University City Philadelphia is 2 minutes’ walk to the University of Pennsylvania’s campus and is 10 minutes’ drive from the Philadelphia Museum of Art. Main bed was good. Staff was courteous. 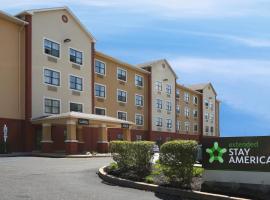 This Extended Stay America - Philadelphia - Airport - Tinicum Blvd. is located in Philadelphia and especially designed for longer stays, with all rooms featuring a fully equipped kitchen. Everything. Nothing to complain about.

Located outside of downtown Philadelphia this hotel is 1.1 mi from the Philadelphia Airport and offers a 24-hour shuttle. This Microtel Inn features free WiFi and a business center. Very clean and nice little hotel

Located within 3.1 miles of Philadelphia Zoo and 4.2 miles of University of Pennsylvania, North American Motor Inn has rooms with air conditioning and a private bathroom in Philadelphia. I enjoyed the comfortable bed ,quiteness and cleanliness of my room and the facility. It 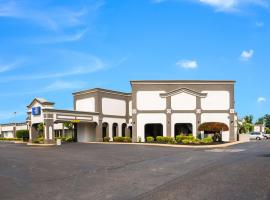 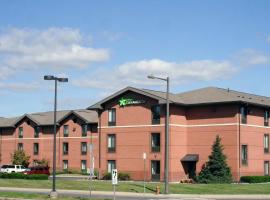 This Extended Stay America - Philadelphia - Airport - Bartram Ave. is located in Philadelphia and especially designed for longer stays, with all rooms featuring a fully equipped kitchen. Everything was so convenient. It was like a studio apartment for 2 people plenty of room and the...

Just outside of downtown Philadelphia and only a short drive from a number of area attractions, this hotel offers comfortable accommodations along with a variety of free and thoughtful amenities. standard place, simple and efficient 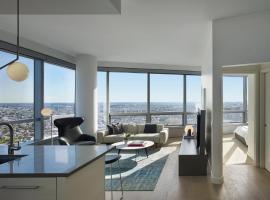 Housed in a modern high-rise building, the apartments at AKA University City is partly residential with a front desk and onsite amenities that include a lounge, a restaurant, a fitness center and an... Location was great, close to the university & the shopping area, Very clean with a fantastic... 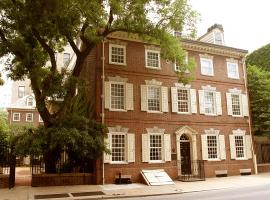 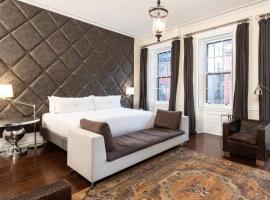 Located in Philadelphia, a 16-minute walk from Mutter Museum, The DWIGHT D a boutique hotel has accommodations with a restaurant, private parking and a garden. Fantastic location! Well appointed room. 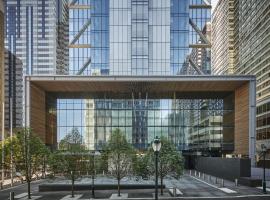 Soaring above Center City in the skyline’s tallest tower, Four Seasons Hotel Philadelphia at Comcast Center is located atop a 60-story landmark by architect Lord Norman Foster. Picture perfect hotel. The staff was exceptional, the room was elegant, and the pool area was... 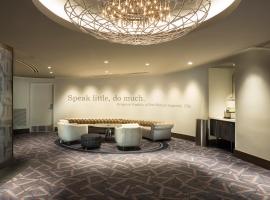 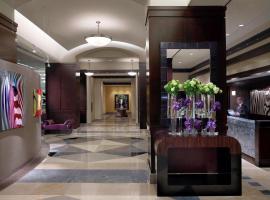 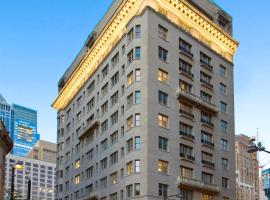 On the corner of 18th and Walnut Streets, AKA Rittenhouse Square features fully furnished accommodations with spacious bedrooms, full kitchens and amenities including on-site dining. The room was HUGE! The location was right in Rittenhouse Square, so close to everything. Located in Philadelphia, a 9-minute walk from Mutter Museum, Pod Philly provides accommodations with a restaurant, private parking, a fitness center and a bar. Best hotel in center Philly! The location is centric, with most of the interesting sights at a short... FAQs about hotels in Philadelphia

Friendly City of the Founding Fathers

The birthplace of American independence, Philadelphia was founded in 1682 by William Penn. The name of the city translates to City of Brotherly Love and the city itself is a vibrant mix of history, art and culture.

Philly is famed for its public art with more sculptures and murals than any other city in the USA. Seeing the best graffiti and statues won’t break the bank balance, since you can find many free tours and admire them absolutely free of charge!

It’s also home to many national historical sites with the Independence National Historical Park as a starting point and center for all the major landmarks, including Independence Hall, where the Declaration of Independence was signed and the Liberty Bell is located, the symbol of the American Revolution.

Visit the world’s largest urban landscaped park, Fairmount Park, with over 17 square miles of green area. There are plenty of paths and hiking trails and after that, enjoy a local cheesesteak sandwich, soft pretzel or some Tastykake snacks.

Arriving at Philadelphia International Airport, you’re just a 20-minute ride from downtown. Booking.com has a variety of hotels in downtown Philly, near the airport or for the sports enthusiasts, near the Wells Fargo Center.