Enter your dates and choose from 27,089 hotels and other places to stay 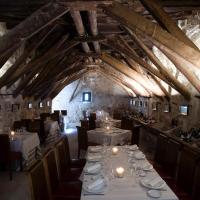 HOTEL PALACIO DE MENGIBAR has a restaurant, bar, a shared lounge and garden in Mengibar. This 4-star hotel offers a 24-hour front desk and a concierge service. The location is perfect, and the view from the room was incredible. Great value for money. A pity we stayed only one night and had no time to enjoy hotel facilities. 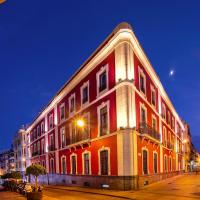 Ideally set in Córdoba, Eurostars Azahar features air-conditioned rooms, a fitness centre, free WiFi and a bar. A sauna and a car rental service are available for guests. Clean, very good breakfast, in the center of the town 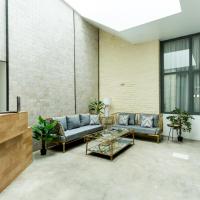 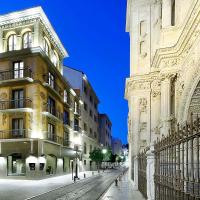 Situated in Granada, within 70 metres of Granada Cathedral and 1 km of Alhambra and Generalife, Eurostars Catedral offers accommodation with free WiFi. Great hotel. The room was really big and even had a sitting area and two small balconies. The staff were really friendly are were able to check us in early. Good location. From here we were able to easily walk to all sights including the Alhambra. Good value for money compared to other hotels we stayed in.

In a prime location in Málaga, Madeinterranea Suites provides air-conditioned rooms, a restaurant, free WiFi and a shared lounge. Perfect position in the city centre, everything is within walk distance. The structure is nice, the staff is friendly and helpful. The breakfast is very good, fresh and with a lot of choice. We would definitely recommend! 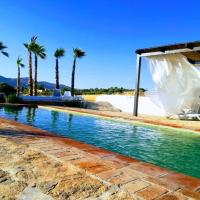 Situated in Ronda, 7 km from Plaza de Espana, Hotel Ronda Moments features accommodation with a restaurant, free private parking, an outdoor swimming pool and a bar. Beautiful location. Lovely big room. Nice and warm as it was wet and cold when arrived. Fantastic breakfast spread especially as only a few guests. Host made us freshly squeezed orange juice and coffee. 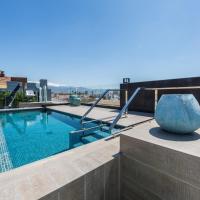 Located 5 minutes’ walk from AVE Train Station, Catalonia Granada features a swimming pool and a roof-top sun terrace with city views and bar service. There is free WiFi available throughout. The bedroom was huge and the bathroom was a dream. 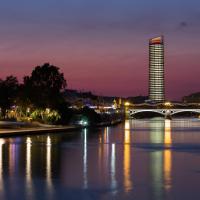 Located 700 meters from Plaza de Armas, Eurostars Torre Sevilla is located in the last 13 floors of this skyscraper, the highest building in Andalucia. The view. The view. The view. :) Also, the shops and the park as you walk out of the hotel. Staff extremely polite and helpful. They had no problem to communicate in English and French. Our bar/fridge stopped working, it genuinely took them 6 minutes to bring a new one. The bathroom with Italian/walk-in shower, the huge heated mirror so it wouldn't fog up... extra comfy bed and perfectly clean room throughout. So many positive things to say about this hotel... great value for money. I'd definitely come back. 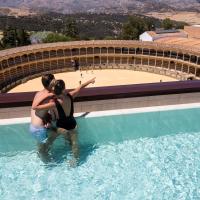 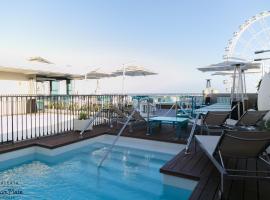 Featuring a seasonal rooftop plunge pool with views and a courtyard, Room Mate Valeria is 200 metres away from Calle Larios. Free WiFi is available throughout. Bed was soooo comfortable and the room decor was very cool. Loved the overall vibe of the hotel. 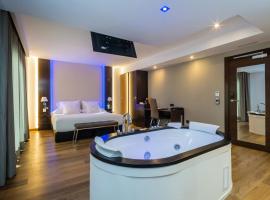 Located 200 metres from Torrecilla Beach in Nerja, MB Boutique Hotel- Adults Only offers a business centre and free WiFi throughout the property. The hotel is perfectly located just outside the main pedestrian area of the city, with relatively... 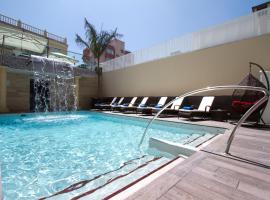 Just 60 metres from the charming La Carihuela Beach in Torremolinos, El Tiburon Boutique Hotel & Spa (Adults Recommended) offers an outdoor pool. Free WiFi access is provided. Very comfortable. Awesome staff. I even got a hug for being the first American tourist of the... 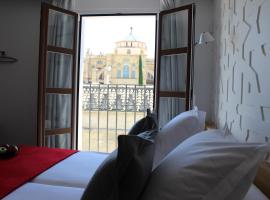 Set opposite the famous Córdoba Mosque, Hotel Boutique Caireles is located in the historic centre of Córdoba. This modern hotel offers free WiFi and a shared terrace and TV lounge. very central location, major scenery, good restaurants and shopping are all within walking distance,... 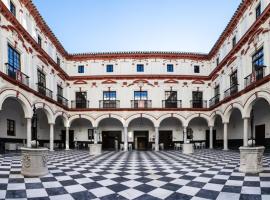 Hotel Boutique Convento Cádiz is a 17th-century convent in the centre of Cádiz and just 25 metres from the Palacio de Congresos Conference Centre. It has a charming interior courtyard. Beautiful courtyard setting. Very well located for sights, train station and catamaran ferry.

Located next to La Merced Square, this hotel is 190 metres from Ronda’s Bullring, in the historic town of Ronda. Hotel Colón offers rooms with air-conditioning and free Wi-Fi throughout. The service was extra special! They were most kind and attentive. 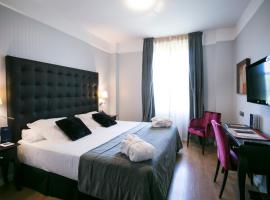 Set in an impressive historic building, La Casa de la Trinidad offers chic accommodation in the historic centre of Granada. Rooms include free Wi-Fi and a flat-screen TV. apart from class doors on the bathroom it was a great hotel in a superb location manned by... 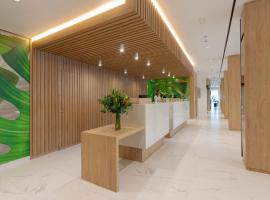 Hotel Helios is located on the front line of San Cristóbal Beach in Almuñécar on the Costa Tropical. It offers an outdoor swimming pool and a bar with beautiful sea views. Free WiFi is provided. The friendliness and helpfulness of the staff. This was Hospitality at it’s best. ! 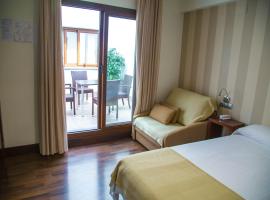 Set 400 metres from the famous La Mezquita Cathedral-Mosque, in Cordoba’s Old Town, Cordoba Carpe Diem offers rooms with air conditioning. This hotel is located 700 metres from the Alcazar Palace. Loved everything and would recomend to friends

Hotel Los Tilos is situated in Granada's central Plaza Bib-Rambla. The hotel features a rooftop terrace with great views of the Alhambra, Albayzín, Sacromonte and Sierra Nevada Mountains. Sergio at the front desk was wonderful. Location perfect for walking old town and having tapas.

This hotel is housed in a modern building in the heart of historic Ronda. It is a short walk from the city’s main sights, including the impressive Puente Nuevo. Biking friendly with space to fix and store bikes. Good breakfast.

Set in a nationally listed monument, dating from the 16th century, Hotel Posada del Lucero is located in Seville’s Old Town. We have a holiday rental place ourselves and I travel a lot for work in high-end hotels, but here...

Overlooking Plaza Nueva Square, the elegant Hotel Inglaterra is just 250 metres from Seville Cathedral. The location is the best in Seville. In the center of everything. We didnt use any taxi. 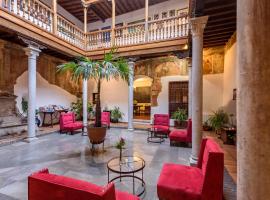 The 16th-century Palacio De Santa Ines, set in the Unesco World Heritage Albayzín district, is 5 minutes’ walk from Granada Cathedral. For a standard room. - no superior available -was excellent . Even had a view of Alhambra.

H10 Corregidor Boutique Hotel is set in central Seville, 15 minutes’ walk from the cathedral. Built around a typical Andalusian patio with a fountain, it features free WiFi and free gym access. The welcome glasses of Cava and candy dishes throughout the lobby was awesome. 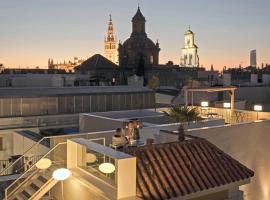 Hotel Rey Alfonso X is located in the historic centre of Seville, a short walk from the Giralda and the Santa Cruz district. An outdoor swimming pool is open from June to September. Great modern hotel with friendly staff. Thank you 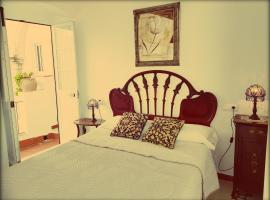 This renovated 17th-century house is in Arcos de la Frontera, 65 km from Cádiz. It features a rooftop sun terrace with views over the River Guadalete and Sierra de Grazalema. Perfect location, with a great view from the rooftop terrace. 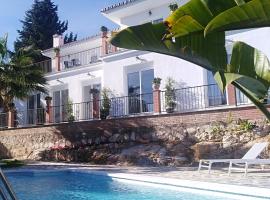 Enjoy the sea air from your private balcony in this hotel, make the most of the sunshine by the outdoor pool –you are just a short stroll to the beach. 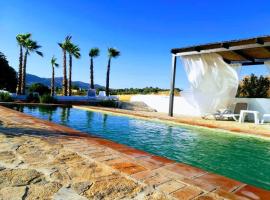 Situated in Ronda, 7 km from Plaza de Espana, Hotel Ronda Moments features accommodation with a restaurant, free private parking, an outdoor swimming pool and a bar. Beautiful location. Lovely big room. Nice and warm as it was wet and cold when arrived. 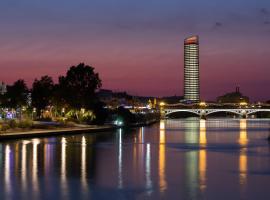 Located 700 meters from Plaza de Armas, Eurostars Torre Sevilla is located in the last 13 floors of this skyscraper, the highest building in Andalucia. The view. The view. The view. :) Also, the shops and the park as you walk out of the hotel. Set in a converted house with a spacious courtyard, surrounded by gardens, Hotel Riad Arruzafa is located in Cordoba’s El Brillante neighbourhood. The hotel offers air-conditioned rooms with free... Very comfortable atmosphere, the manager and his wife were very kind and helpful. 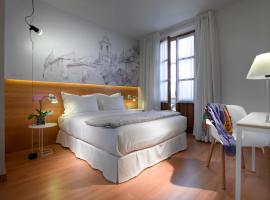 A 25-minute walk from Granada’s Alhambra, Hotel Párraga Siete is set in a charming 19th-century building in the old town. It offers stylish rooms and an à la carte restaurant. The interior style of the hotel was very appealing. 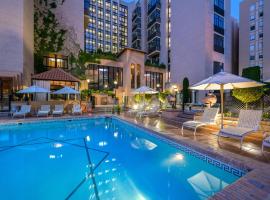 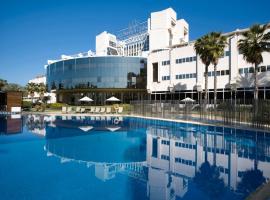 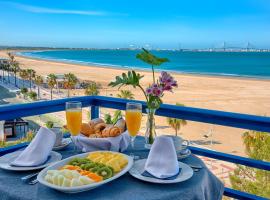 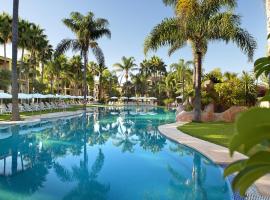 FAQs about hotels in Andalucía

Pulsating with History and Tradition

Resounding with flamenco, the fabulous Spanish region of Andalusia (or Andalucía) has world-class attractions, wonderful scenery and welcoming beaches.

Some of the best Andalusia hotels are in Costa del Sol resorts including Nerja and glitzy Marbella, neighbour of exclusive Puerto Banús. Nearby is Málaga, Picasso’s city with relics of its Roman past.

Moorish influences have also left magnificent marks. Formerly a mosque, the incredible Córdoba Mezquita is now a cathedral. Against the backdrop of the Sierra Nevada mountains, the Alhambra is a former sultans’ residence looking down on lovely Granada, home to some romantic Andalucia hotels and apartments on Booking.com.

You can ski in the Sierra Nevada, and also in mountains by Aracena north of Seville, the region’s sun-drenched capital with a gigantic Gothic cathedral and amazing architecture in Plaza de España. It also has a ring where controversial bullfighting occurs.

Its nearest beaches are on the Costa de la Luz, between Isla Canela (by Portugal) and Tarifa. Nearby is Algeciras, across the bay from Gibraltar. Other popular Andalusia beaches are in Costa de Almería resorts including Roquetas de Mar and Mojacar.

Inland, on a steep escarpment, Arcos de la Frontera, is one of the White Villages of Andalusia. Nearby is Jerez, home of sherry. To the east is Ronda with its high bridge spanning a deep gorge.